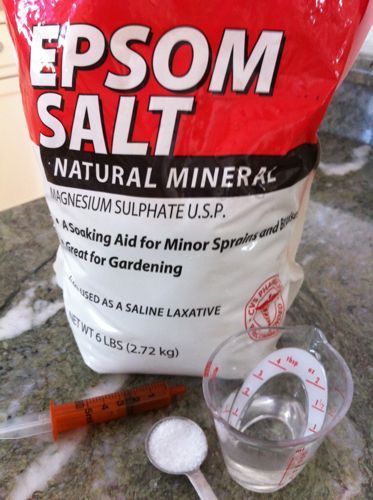 Despite what you may have read, no - epsom salts will not increase the amount of magnesium in your body. Medical and scientific research has proven that magnesium is not absorbed from outside the body through skin cells. Sweat glands and hair follicles DO transport magnesium through the skin, but they only account for 0.1% - 1% of the skin’s surface, and do not transport a sufficient amount of magnesium to raise your serum level. However, epsom salts are still useful for many purposes. I keep unscented epsom salts on hand for making body scrubs and for watering my plants (it practically brings them back to life when they’re seemingly dead). Unscented, plain epsom salts can also be used as a magnesium supplement or laxative if you drink them in liquid; some people feel that this also helps with anxiety (I have no clue what the safest dose may be for internal use). I have peppermint epsom salts for soaking my feet and doing my own pedicures. I also have a couple of scented epsom salts for soaking in the tub, to relax and relieve general soreness. Whether or not the salt really makes a difference is debatable, as research suggests that a hot bath with no epsom salt will relieve pain just as well (the moist heat is ultimately what relieves pain). However, adding epsom salt does make the water “softer”, and the scents are extra soothing. I’ve even used epsom salts as fake snow in Pinterest crafts! As cheap and versatile as they are, epsom salts are just a no-brainer “staple item” for me. I probably have 4 different bags stashed around the house right now...

This stuff works for my back pain like nothing else, and it is so cheap! I just soak in a tub for about 15 minutes and go out feeling 10 times better. It has no smell (love that!) and it makes also makes my skin super soft. To me Epsom salt is 100 times better than any fancy bath salt out there. Must have!

I love Epsom salts and have recently discovered a new way to enjoy them. I get eczema on my foot and when I use an Epsom salt and baby oil scrub, it dramatically improves and goes away entirely if I am diligent with using it every day. I will always keep a bag on hand for scrubs and baths.

A must have for after training and after marathons. It soothes and relieves mild aches and pain. Cheap.

So relaxing and always is a great night cap before I go to bed if I just had a really really long day. I kick back, light the candles, pour bubble bath full of epsom salt, and just sip on a glass on wine. If you want to chill at the end of the day, be sure to give this a try and it helps you sleep and makes you feel much more relaxed

Seriously, can you go wrong with a big bath of bubbles and epsom salt.... I don't think so!! Magnesium is healthy for the body and most of us are deficient regardless so it is very healthy (on top of all of the stress relief that you experience from this)

How can anyone not enjoy epsom salt baths!!! They are so comforting and actually healthy because most of us are deficient in magnesium! This is a staple in my routine and my "HG" for relaxation lol (I could use a good massage too :)

I do love all of the benefits I get from epsom salt baths! This is great to relax the body and also get a little bit of magnesium absorbed. A mineral we are all deficient in to a degree since it depletes so quickly. Highly recommend using Epsom salts in your beauty bath!

There is a lot of hype around epsom salt baths and everyone I know swears by them for recovery. Honestly, it's soothing a little bit but I never actually feel or notice a real difference rather than using soap. I heat up the bath tub extremely hot and I still just don't see a huge difference. I get a little bloated and watery feeling after and don't love the way that it feels.

I have generally low immunity and get sick all the time, especially now that my son is in day care, he's always bringing home viruses that I inevitably always catch. I read online about an instant cold remedy that includes epsom salts, bicarb and a tablespoon of finely grated ginger in a really hot bath, soak for as long as you can (at least 20 minutes), drink a ton of water while you're in, then have a shower immediately after, and your cold will be gone by morning. I had my doubts it would work because nothing else ever has for me, but I was absolutely blown away when I woke up the next morning after having felt like absolute death the night before and felt almost completely good again, except for a very slightly sniffly nose. By the next day the symptoms were completely gone. I was still skeptical though and figured I must have just had a 24 hour bug. A few weeks later my son brought home yet another virus, so I did the bath again. Next morning, cold gone again. Good luck maybe? A few weeks later he brought home another one, had the bath again, cold gone again. These baths are amazing. Far better than any ionic humidifier, cold & flu tablet, flu injection or detox I have ever tried, by a long shot. This stuff rocks.