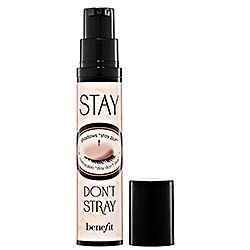 If you'd asked me 6 months ago if I liked this primer, I would have enthusiastically endorsed it. I've used it for so many years as an eyeshadow primer as well as a concealer primer under my eyes to cover dark circles. I was happy enough until I went to buy it online one day and saw the reviews weren't as good as I expected. It made me think twice, and I decided to branch out and try something different and now I can't look back. I think I used this so much because it seems to be the ONLY primer that markets itself as a concealer primer. My under-eye circles have always been really bad, so I wanted that extra layer of coverage, and this seemed to be my only option. As a concealer primer: Being the only known one of its kind, I think I have to say it works just fine. It DEFINITELY provided an extra layer of coverage that I needed, otherwise my concealer just wouldn't cut it. So for that and the yellow tone to cut through my dark circles, I liked it, and more than other drug store colour correctors. But I still found my concealer faded throughout the day no matter what brand of concealer I used, so this might be the culprit. As an eyeshadow primer: Not good. I'm using up the tube now and comparing it to others, it barely works. Colours go on well but the vibrancy seems to fade throughout the day, partly because the colours seem to mingle together and get muddy. And the creasing is not terrible, but it definitely happens after about 8 hours of wear. One big con that I've always hated - even when I loved this product - is the oil. As it gets towards the end of its life, it will become oily and the oil will almost be its own element and make it hard to use. This was really bad when it was a pump, so the wand helps to cut down on that. FYI for those wondering what products I switched to - I now use Bobbi Brown Undereye Correcter as my concealer primer and Urban Decay Primer Potion in Eden for my eyeshadow.

This eye primer / concealer primer is the best makeup product iver ever tried, as an NC15 i cant usually find my perfect shade however this in light/medium is perfect, i apply this as my concealer or under my mac pro concealer, either gives a great finish however with just this it makes my skin very glowy and look so healthy, as soon as i bought this concealer i got so many compliments on how clear and healthy my skin looked, and with acne prone skin this really boosted my confidence, it lasted all day with a powder on top, i am completel in love!!!!!

Oh wow, surprised to see so many bad reviews. I love this primer.. lol. I wear eyeshadow everyday so need a long lasting primer. Now I do use this in conjunction with another primer (Art Deco applied first) but the both together make sure my eyeshadow doesn’t budge all day until I remove it myself

i would never repurchased this product at first i though i got a bad one as it was thick and (clumpy and does not spread) easily used on my undereye so i purchased a second one and the product was the same just does not work for me ..

Can't believe how many of you hate this product but then I don't use it as a eye primer : ) Mac paint pots are the only thing that work. No, I use this as my under eye concealer it's fab my go to! The slight orange tint balances out the blue under my eyes. It's also good for the redness around my nose. I like it more than any other concealors because it doesn't cake and looks light even though it's heavy coverage. So if you don't like it as an eye primer, try is as a concealor!

Oh sharks ! Here we go again Benefit... This should be called something else, like 'Don't Buy Me'. There are a gazillion different things that could be used instead of this as a base, including but not limited to; MAC paint pots, Urban Decay Primer Potion, Makeup Forever, NYX...you get the idea. After applying this in the morning, it broke down by mid afternoon whereby my eyelids looked like a layer of melted Plasticine - very 'Death Becomes Her'. Overpriced, underwhelming and just plain bad. Doesn't improve wear, and didn't have a long shelf life before it started 'separating' into two phases - phase 1, runny clear liquid, and phase 2, thick pancake batter-like paint. This could have been old stock in the store, and perhaps it was since I can't see anyone recommending this to friends, unless it's a friend they hate. No Benefit. Just, no.

I got my makeup professionally done at Sephora. The woman used this primer on my eyes. I was upset to see only 5 hours later my eyeshadow was completely creased. I use Essence I love the stage primer which is amazing. This primer did not last and therefore I would not buy it or recommend it

Don't bother to purchase this , it made my concealer crease badly !! Also dried my under eyes really bad ????

It's a good primer, consistency wise, and keeping eye makeup in place. However, for this pricetag, I would have expected more.

NC 20. I bought light/medium. There are two shades (also medium/dark). I have veiny eyelids and want a primer with concealing effect. I had also been using Latisse and noted that my eyelids have darkened a bit (fading, but not a nice side effect.) This primer works very well for that. With a small dab patted over the lid, this gives me a clean canvas that I have also worn on its own as a 'no-makeup' look. I also make sure to blend it out far enough that it covers any area of a planned cat-eye line or kitten flick. It is unscented, consistency like a cream concealer, and has a doe foot applicator. It dries quickly - I have to do one eyelid at a time and needs to be rubbed/patted in well otherwise it looks cakey and uneven. Stays all day with minimal creasing. My big complaint is that product performance starts to go downhill once it starts to dry out, which was well before the 6 month mark. Product starts to collect around the cap and edges, making it extremely difficult to open and close! I would think a squeeze tube would be more hygienic, reduce the amount of air getting into the tube and have less wasted product. Overall, skip this. Works well for about a month, then dries out and becomes a disaster. Too expensive to replace that often. The search continues.