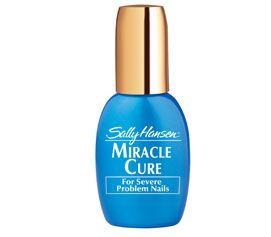 When I first used this, I liked it. But I’ve changed my mind. It dries too fast and is gloppy.

I am so very impressed with this strengthened, it is unreal. I have been plagued with weak nails that peel and chip constantly, and can't grow past my fingers because they break. I bought this, and can honestly say it has changed that entirely. I started with just a coat over each nail, and noticed that the Polish is quite thick, which immediately helps add a layer of strength to the nail and reduce breakage. I only applied about 1 coat per week/week and a half, as I completely agree with the reviewers that said applying every 2 days and then taking off with nail Polish would do more harm than good -- and it looks like this was the recipe for success. At first, I thought the thickness of the Polish was the only thing preventing my nails from chipping as often as they typically do. But, I realized after about of month of using it that I am not as religious about applying it as I could be, so it had actually chipped of my nails and I hadn't noticed -- but my nails were still not peeling like they had been. I went from peeling/breaking a nail about every other day to about once a week -- which is a huge improvement for me. I've been so busy I haven't used it in about 2 months, and am just starting to notice a few more splits than when I was using it bi-weekly. Bottom line, I've noticed a marked difference. I have used it as a top coat and it's ultra shiny, and looks ultra shiny and stays clear when used alone (doesn't yellow like other formulas). Additionally, because the formula is thicker, it lasts surprisingly long (I usually get 2-3 days before chipping - this is at least 4-5). You can tell it's a stronger nail Polish, but the scent isn't unbearable and fades after dry. This stuff has really changed an annoying part of my hands, and I will keep buying it as long as they make it.

Great as a base coat but did nothing for my super flaky nails.

After having gel nails for 2 years, I was forced to remove them as I am taking a cosmetology course and I'm required to have clean nails. When I removed my gel nails, my nails were soooo thin and weak and bent like crazy, so I was looking for a good nail strengthener. I saw amazing reviews for O.P.I's Nail Envy but it was like 25 euros, and I'm quite stingy with the money that I spent on makeup and I was not about to spend 25 euros on a bottle of nail polish. So I came across Sally Hansen's Miracle Cure which was 13.85 euros which is significantly cheaper than Nail Envy. I have been using it religiously (I even set reminders on my phone) every other day for a month and I am in love with it! My nails definitely don't bent anymore with the slightest movement, they still chip but not so much like they did at the beginning, and the most amazing thing (at least for me) it helps promote nail growth! I was cutting my nails and I accidentally cut my pinky a bit too much (you could see the bottom layer of the tip) and I applied it and in about 3 days later it grew back to where you could see the tip perfectly! Like I said, I'm in love, it dries in seconds, doesn't smell bad, the brush stick is quite long but it's easy to use and the brush is slightly square and thick which is perfect, and overall, if you want a dupe to Nail Envy, definitely try this, it might work for you!

Im satisfy with this product. My nails are realy harder, shiner and much more healthier. I would buy it again. I bought it with a magazin, because it was a present. All in all it cost about 3 euros (with the paper). A really good bargin :)

Having just had a very stubborn gel polish removed my nails have been breaking, flaking and peeling for the last few weeks. I purchased the Miracle Cure to hopefully assist with strengthening my nails a bit so they had a chance to grow. Immediately after Miracle Cure dried I could no longer feel the uneven surface of my nails, they were smooth and looked in much better condition than they were. After about 2 weeks of use my nails have gotten much stronger and have finally grown some. It does require re-application every two days or so as it peels off quite quickly, but it's relatively quick to dry so this is no problem for me. It's a bit pricey in comparison to some higher end products but it's also more readily available to buy in my area. Would buy again.

Useless. Sorry I wasted my money on this. Now fafantastically happy with OPI ORIGINAL FORMULA NAIL ENVY. Go ahead and pay for something that actually works. Not this.

I telephoned Customer Service at Sally Hansen and said I was looking for a treatment base coat for my dry nails that broke (split) at the sides. Miracle Cure was the recommended product. According to the packaging, this strengthening treatment for severely dry and brittle problem nails is guaranteed to provide 50% stronger nails in three days. It's a clear polish that can be used by itself or as a base coat and/or top coat. I used it as base coat. It dries quickly and has a great shine. It's been five days since I began to use Miracle Cure. Almost immediately my nails began to feel harder. Unfortunately, almost immediately my nails began to break off at the ends. Miracle Cure doesn't contain DBP, toluene, or formaldehyde. Note 4/25/16: I'm trying this again, as it's very well liked on the Nail Board. I used as a base coat. On Day 2, my nails feel harder. On Day 4, the middle fingernail on my right hand peeled off at the end. On Day 5, a chunk broke off the tip of the thumb on my left hand. On day 6 I see white (dry) spots on three of my nails. I don't plan to continue with Miracle Cure any longer and have removed it. I'm using Solar Oil to try to restore my nails.

did nothing for my peeling nails. wouldn't repurchase.

After a summer of constantly painting my nails they were in a bit of a sad state- bendy, peel-y, yellowy, flaky. All of the bad things. I purchased a bottle of this to try and spruce them up a little, and I have to say it has certainly helped. I usually use it as a base coat which I've had no trouble with. The only reason I wouldn't buy it again is because I would like to try something else.