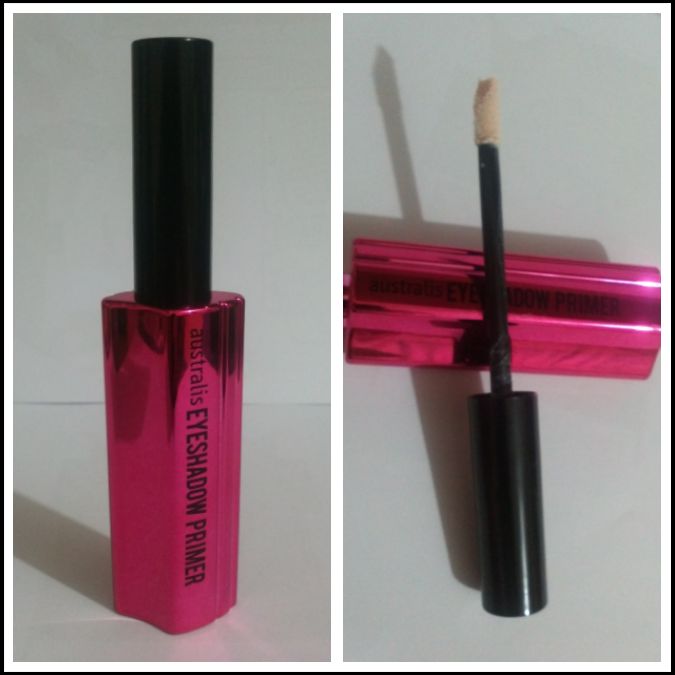 Skip to the bottom for the actual primer review. Make sure you cut open the packaging because you still miss out on most of it if you only remove the stopper. I've uploaded photos showing what a rip off this product is. If you look through my reviews you'll see I never judge products by price, only quality - but the packaging on this is a borderline scam so I'm going back on that rule. This is a 5/5 in terms of non-creasing, but the scam packaging and potentially dangerous paint coming off onto the doefoot have made me rate it a 1. I researched before buying and knew I would have to remove the stopper with tweezers halfway through. The doefoot applicator started coming up almost bare ~15 uses ago despite my best swivelling attempts. So today I used tweezers to remove the stopper, and was able to fill up half a sample container before the doefoot again started coming up bare. I then used heavy duty scissors/shears to cut the tube open - and discovered there was more than double the amount actually left. I wasted a lot of it trying to get it all out. If I were to use this 5x a day, there was actually about 4+ months worth of product left inside... 15 uses after the doefoot started coming up bare and your average customer would have bought a replacement thinking it was empty. About half the product is unreachable due to the design of the tube. It is inflexible, the wand cannot be swivelled, and flattening the sides of the cylinder for the primer to sit in is practically malicious because the applicator will NEVER reach it unless you cut open the tube. Even removing the stopper doesn't let you reach the edges. There's a difference between asshole design and design oversights but flattening the edges for no reason so you can't reach any product in it is pure asshole because then you make customers buy more despite correctly advertising X amount. Whiteware manufacturers have a similar con in place where they advertise say, a microwave as being 30 Litres but because it's from some random alcove high on the back wall of the microwave where your plate won't actually fit, it is completely misleading. Australis are pulling a similar con by advertising an amount you can't reach (normally). So you think you used up all X grams of it and buy another despite having half of it left. No wonder the packaging is almost solid plastic - they don't want you to cut it open. My biggest concern is that after I removed the stopper, some primer got onto the pink neck of the bottle. It was there for a max of ten minutes - but when I wiped it off with the doefoot the paint came off with it and stained my doefoot and the primer on it pink. Hell no I am not putting that stuff on my eyes, I have no idea if the pink paint itself is eye safe. Bright colours usually aren't. ______________________________________________________________________________________ The primer does literally nothing for increasing colour/pigmentation, but it doesn't advertise itself that way anyway. Buy something else if you want your shadows to apply brighter. In terms of wear, I use this with my Tarte Rainforest of the Sea Vol I palette: Without primer - creases in 3 hours. With primer - fades by about 20% after 6 hours, 40% by 10 hours, but creasing only appears after 14 hours. If you want a &quot;cheap&quot; primer solely to stop creasing, then grab this if you're willing to put in 45 minutes getting it all out of the tube. I would rather support a different company that lets me easily use all of the product I paid for.

Unfortunately this primer is no match for my oily eyelids. Unless I immediately set this with powder my eyeshadow will crease beyond recognition in the slightest heat. Also the opaque packaging gives me no idea of how much product I have left. I've used much better primers - blinc and UD primer potion come to mind - that will stand up to the most extreme humidity and sweating with my eyeshadow remaining fresh so I definitely won't be repurchasing.

Whoa! Okay I like this. I usually use the NARS eye primer, which is quite expensive. I ran out the other week and decided to try the Australis eye primer to tie me over, and boy it was fantastic. Actually so good that I haven't bought another NARS primer. Sorry NARS! This primer goes on very smoothly and doesn't irritate the eyes. My shadows come out lovely and stay on the entire day. And the best part? This primer is ridiculously cheap. Love it.

My HG eyeshadow primer!!!!!!! My eyeshadows will last all day over this product, and its also great for the undereye to prep for concealer. Its lasted me like 6-7 months. The packaging is a nuisance, as in the seal prevents more product use, however I've found that if you remove the seal/cap, Voila! Theres all this additional product still in the tube. The doefoot applicator makes of fool-proof in terms of application :) highly recommend

Lost some points for the applicator and bottle. It's almost impossible to get it out of the bottle once you have used a bit. I always end up applying it with my finger too. Other than that I find this product to be amazing! I'm always losing my eyeshadow to sweaty eye lids but at the end if a hot day I find that my eyeshadow is next to perfect when I use this primer. It's affordable and works so I will buy it again despite the packaging.

Lucky this was cheap seeing as you're only getting half of what you pay for with this silly bottle !!!

Cool!it works! Last the eyeshadow longer and let it more pigmented, price so cheap~The packing is so so, overall, with the nice price, it is really worth it! Will purchase again!

For me, this is a take it or leave it product. Actually, I'll be leaving it once I use it up. It's translucent and spreads evenly, but the package is ridiculous (why would I bother to wiggle the sponge wand around for hours to get the product once it's half-way used up?) and the product is fairly, &quot;Meh&quot;. It does the trick in as much as it creates a smooth surface and prevents creasing, but it does a mediocre job of keeping the colour true throughout the day. I consider it false economy to pay $12 for something you can only use half of before you don't have the time to fuss around with trying to scoop out when you can buy a tube of Too Faced for double the price, have a better product and more than 4 times as much use out of (right down to the last drop). I've only found it useful as a primer for my MAC paint pot bases which need a bit of slip to blend well and really ensure that you have solid base for your eyeshadow and liner for the day (or night). Ultimately, like most Australis products, it just doesn't quite cut it. If you've tried swathes of primers over the years, as I have, you'd be better off not bothering with this one. The only saving grace was that it didn't cost as much as NARS Pro to find out it wasn't worth the bother.

I bought this product as a cheap alternative to the urban decay eye primers, and am very happy with the results given it's price. It goes on easily and is quite silky, and soaks in within a few minutes. I have oily eyelids and this product prevents them from creasing within 4-5 hours of application. It also helps retain the vibrancy of the eye shadow colours.

I have extremely oily eyelids and this will last me around 4-5 hours and then it will begin to crease but I only use this to control oil so I can wipe away without ruining shadow or anything. very good price, and I have a magical tip, pop out the little silicone cap at the top of the tube (i used tweezers) when you think you have none left and bam you have so much product left!