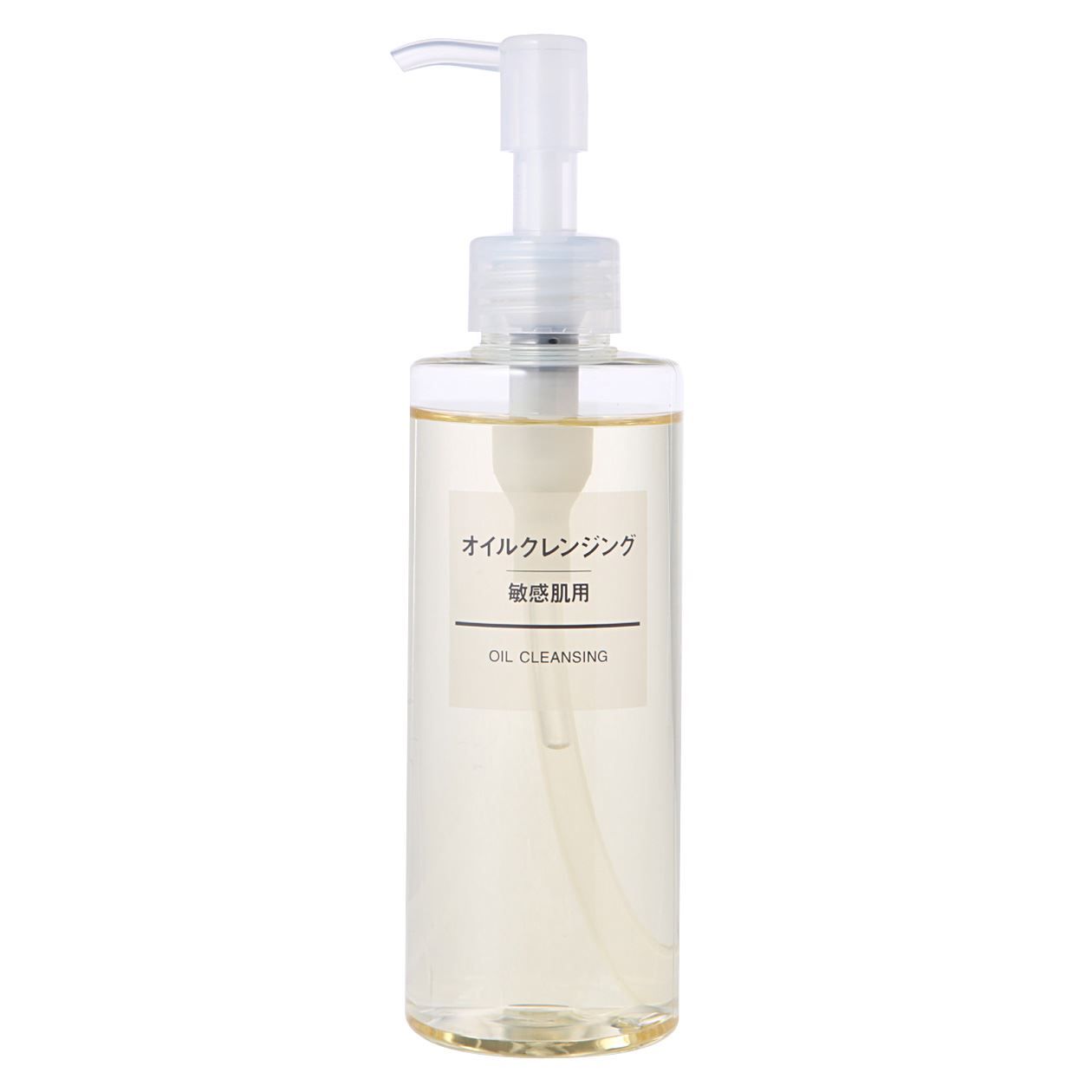 This oil is amazing!! I'm not acne prone however I do have rosacea and finding a product that doesn't irritate is really difficult. I used to use Shu Uemura's Ultimate oil and it was quite amazing but the pricetag it came with... no so much. Muji's sensitive option is such a good alternative.. dare I say even better than Shu's. The smell is a little bit meh because of the olive oil however it isn't overpowering. Some people are complaining about the consistency but what I do is hold it in my palms for a couple of second to warm it up. Pros: 2 pumps are enough (for full face makeup) cheap deep cleansing non irritating washing off easily Cons: smells a bit like olive oil

My favourite cleansing oil is Fancyl, but last year when I ran out I looked for a cheaper alternative that I could buy locally, and found the Muji cleansing oils. I have since used two of them: the sensitive one (first ingredient olive oil and the one shown in the picture above) and another one (first ingredient hydrogenated polyisobutene) - I'm not sure if it's the 'mild' or the 'normal' one. This review is for anyone curious/confused about the differences between them, because they are significant: Muji sensitive (olive-oil based): slighter darker colour and thicker than the other oil so a bit harder to spread around your face, it emulsifies well but isn't as effective at removing really stubborn waterproof makeup. The upside is that it's very gentle and non-drying, and my skin is hydrated and happy with it. I've been through a whole bottle with no problems whatsoever. Muji non-sensitive (hydrogenated polyisobutene one): lighter, more fluid, as effective as Fancyl at removing stubborn waterproof makeup, but (unlike Fancyl) this stuff is drying and sensitises my skin over time. Last winter, after using this for several weeks (it was OK at first) my skin became so sensitive that it reacted to everything I put on it, including (in the end) water. It was so dry it starting peeling. I do have slightly sensitive skin but it has never reacted like this before. I didn't realise it was the oil and spent a small fortune changing all my other skin care to fix the problem, thinking it was just my age or the dry winter weather - finally I changed to the sensitive oil in desperation and my skin started to recover straight away. A few weeks ago I tried the non-sensitive one again because I had run out of the sensitive one, and again it was fine at first, but this week I noticed my eyes were getting irritated, and my skin has started reddening with products it was previously fine with. It's going in the bin! Bottom line, Fancyl is my pick for most effective oil without irritation, but the Muji sensitive is great if you don't wear a lot of waterproof makeup and/or have sensitive skin. Avoid the other Muji one!

Many asian beauty gurus recommend it, so i bought one and I am REALLY happy with this new find, so much that I am planning to integrate it into my permanent collection ;) Me : 30yo, uneven and very dry skin, everyday I put on a thin layer of foundation with some powder and blush, and eyeliner. Pro : efficient at removing all kinds of makeup (including waterproof) excellent emulsion easy to wash off it does not strip my skin it does not sting my eyes when I use it on my lids for dark waterproof eyeliner. overall excellent price-quality ratio (Maybe) Cons: it does smell like olive oil, I personally don't mind it at all. not so easy to access if where you live does not have Muji I've used DHC deep cleansing oil ($$$), Pond's cold cream(needs to be wiped off, strong smell), Clean&Clear makeup dissolver(excellent but dries skin out), Kose Softymo deep cleansing oil (very similar to Muji), and Muji is definitely my favourite. Give it a try, it won't break ur bank.

I only recently found my HG mineral sunscreen that would not break me out or trigger an allergic reaction from chemical sunscreens. But as you know, zinc oxide are hard to wash off and so you need an oil to help dissolve it. I'm not a supporter of cleansing balm because of the environment hazards and so, oil cleanser is my best option that i can afford. Anyway, not kidding, but this is the best oil cleanser that i have ever used. Its cheap, gentle and get the job done. I follow up a gel cleanser as a second cleanse. If you have sensitive skin, seriously just go for this. It is heavy during the massaging but rinses without residue. Another Muji cult favorite in my bathroom! Update Dec 2018. I have stopped using this. I developed fungal acne and have to rid off any oil based cleanser products.

i got lucky with this - it's the first cleansing oil i've ever tried. it's also the first cleanser that doesn't make my skin feel tight, and on top of that my skin feels baby soft and smooth, and so comfortable - i never knew cleanser could be so pleasant to use and i love it. removes sunscreen/makeup really well too and it left my face feeling clean, while not dry. the only con is that it made my forehead grow many little bumps (that aren't pimples but??) but i found that using BHA on it helps reduce the problem, as well as adding a second cleanser (QV gentle wash) i also found the olive oil smell a little off-putting at first, but i guess it isn't that much of a problem for me. i'd probably repurchase this until i find another cleansing oil that looks like it'll perform better.

I was just about to hemorrhage some money and buy one of the Shu Uemura cleansing oils, after testing some of them out. So glad I found this instead! I think it rinses better and leaves my skin cleaner and feeling less stripped (I don’t know how that’s possible, but that’s how it feels.) I have two different cleansing oils from Muji. They are both for sensitive skin. In my first review of this product, I stated that I liked the thicker of their two cleansing oils. While it’s lovely, and it works perfectly, I now prefer the lighter one, as I feel that I use slightly less because it has more slip. It also means that I can massage my face with slightly less resistance. I’m not the kind of girl to buy backup products, but we may be moving some distance from a Muji store and I have three large bottles and several travel bottles ready to be packed. It would be very difficult to shell out for the Shu Uemura ones ever again after using this - knowing especially that the ingredients in this product are sooooo much better! I can honestly say that this is my HG cleanser!!!

I always repurchase this product because of the price point and its effectiveness. But recently, the prices went from $9~ to $18~ I will be searching for a new oil cleanser that is cheaper

A great cleansing oil! It removes my makeup and leaves my skin soft and hydrated, I use it in a double cleansing routine together with the Cetaphil gentle skin cleanser. Pro's -Good for sensitive skin -Removes makeup -Makes skin feel soft -Does not sting my eyes Con's -The pump dispenses a little too much product, I feel like i go through it too quickly -Not easily available in Sweden (I bought my bottle in Bangkok)

i have bought this cleansing oil over and over and i think ive found my go to makeup remover. this stuff removes all your heavy duty makeup while being so gentle on the skin. now every time i see this, i will pick ip at least 4 bottles of this bc i love it and i go through ot quite frequently. i also use this to clean my makeup brushes and it gets out all the dried up gunk deep inside the bristles. this is also soo great at cleaning up makeup sponges too. after removing makeup with this cleanser i will follow up with a foaming cleanser, u know, the infamous k-beauty 10 step skincare routine. lol

This is a gem. I've always used cleansing oil for cleaning my makeup. I have tried 3 and so far this is the best one. This is the only cleansing oil that can get rid of my stubborn, waterproof mascara (Heroine Make, I'm looking at you). My eyelashes has been falling out because I wasn't able to clean them properly (they'll fall off with just one swipe of micellar water, yikes). But this product saved my eyelashes and I can just get rid of all of my makeup easily. The only downside is you can find it anywhere in Japan (Family Market normally provides small Muji section) but unless your country has Muji (that sells their skincare line), it's rather hard to find (or expensive). +: Cheap, Odorless, Cleanse everything -: Hard to find I would definitely repurchase. I will ask my friend who is going to Japan to get the big sized one for me.