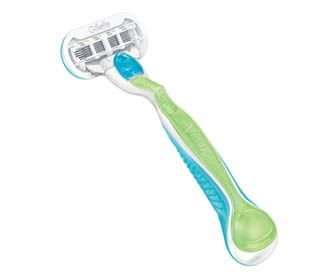 I really did not like this razor and found it hard to maneuver on my legs without nicking myself. I prefer the Schick Xtreme 3 razor.

When I was way younger, I grew up watching Venus Gillette commercials on TV (&quot;I'm your Venus, I'm you're fire. Reveal the goddess in you.&quot; Lalala). When it came to buy a razor, I naturally chose Venus Gillette and have NEVER looked back since then. I pretty much picked the Embrace over the other razors for several reasons: When they first came out with it, they advertised that this one was made with FIVE blades (instead of their usual three) to create a smoother shave that wouldn't nick or get caught in the skin. The 'Embrace' razor also had strips of Aloe Vera on the top of the razor head on both sides to ensure extra protection against the skin and so that action of 'gliding' the razor would be smoother because it's moisturized on top (I think it's now advertised as 'Water-Activated Ribbon of Moisture' but it used to be called 'strips of Aloe Vera' or whatever - either way, STILL A GREAT INVENTION!), it was also portable and could be packed for travelling and it came in a little case (to help protect the razor head) that you could stick to the shower wall to 'dry' your razor (however, I lose it a long time ago so I just leave mine with the blades FACE UP now on the edge of the tub). The colours were also VERY PRETTY (blue and green swirly, calm colours) in a super pretty packaging (yeah, I know I am such a sucker for great product colours - what can I say, Venus Gillette really does put a lot of effort into their aesthetics), but the main thing was that EVERYTHING about this razor seemed very solid from all angles (packaging, colours, quality, function) - this razor looked like it could kick some serious ass. I initially used this razor for my underarms and legs. It was just okay on my underarms (nothing too impressive), but much better for my legs. One day, I decided to try it on my bikini line and pubic area. Initially, I was pretty scared because no one wants to nick that 'regional area' (FYI - pull your skin tight and shave upwards). The result? WHAT THE FLYING FUCK. THIS RAZOR WAS SO UNBELIEVABLY SMOOTH. IT LITERALLY TOOK OFF *ALL* MY PUBIC HAIRS AND MADE MY PUBIC AREA BABY-SMOOTH. YES, YOU READ THAT RIGHT - BABY SMOOTH. As perverted as it sounds, I couldn't stop touching my skin down there just to keep checking I didn't nick it or cut it by accident. NO. NOT A SINGLE CUT. STILL BABY SMOOTH. I WENT *OVER MY VAGINA WITH THE RAZOR* to get the most out of pubic hair out AND IT NEVER CUT THAT AREA, BUT IT TOOK *ALL THE HAIR* OUT. I WAS BEYOND IMPRESSED. They say you shouldn't go over areas too many times, but I had to keep working at it (lol, I have a preference to shave ALL my pubic hair off) and it NEVER ONCE HURT OR CUT THE SKIN OR (GAWD FORBID - THE SENSITIVE PARTS). *Please note as well that I was VERY VERY careful and did it slowly, not rushed.* For the bikini line, I used tons of shaving cream, but for the pubic area, I just did it straight with the razor because if I lathered shaving cream, I wouldn't be able to see all the little hairs. It STILL worked effortlessly. Baby-smooth, like I said. THIS RAZOR DID SUCH AN AMAZING JOB THAT I FEEL LIKE I WENT TO THE SPA. I ACTUALLY FEEL BETTER after a shave with THIS razor 'down there'. This now one of my favourite shower activities, lol. The aftermath? NO BUMPS, NO ITCHINESS. REDNESS WENT AWAY QUICKLY. NO CUTS, NO NICKS. NO PAIN. PUBIC HAIR IS *COMPLETELY GONE*. AREA IS LEFT BABY-SMOOTH. WHAT. I even checked with a mirror 'down there' after my shower JUST TO MAKE SURE I wasn't bleeding on the inside with some cuts. PHEW. No cuts! I was, however, seriously impressed by the baby smooth skin. Can anyone say how horrendously PAINFUL and AWFUL waxing is?! I could cry just thinking about it. This razor not only gave a PAINLESS experience, it also CUT DOWN MY TIME in terms of getting rid of pubic hair. I can do this in the shower after I've washed myself and because it's so good at taking hair out and getting into the difficult areas and doesn't hurt the sensitive bits, it makes my life SO MUCH EASIER and just becomes apart of my regular routine. Thank you Venus Gillette for creating this AMAZING TOOL for women!!! I also want to add that this razor lasts me forever. I don't have to change them too often because they last for so long. This is some serious good quality stuff right here!

First time shaving my bikini line and I can't help but want to write a review here to share with everyone how good it is. The pivotal head made the shaving process really smooth and easy, and the grip was good as well. and I dont think I have nicked or cut myself in the process, (even those hard to reach areas) which is really nice for my first time. :D It's pretty pricey but a wonderful experience made it worth it. The pack comes with 2 refills and a shower mount too. I strongly recommend this to females who want a good shaver :D

I love this razor. Of course I don't like shaving, I don't think anyone does, and it's not the best method of hair removal but for a razor this one is great. First off, this is the only razor that I have ever used that NEVER cuts me, no matter how rushed I am. It doesn't really give me razor burn either like other razors have. It will start to drag a bit when it needs replaced, really that is the only way that I know it needs to be replaced because it lasts for quite a long time. The downfall? Its super expensive! I paid $17 for a 4 pack of replacement blades. I will say though, that all of the quality blades seem to be pricey and I will never get another cheap razor and slice up my legs. They last forever too, so the price isn't even really that bad. I have tried the disposable Venus Embrace and also the Sensitive skin versions of this razor and neither work as good as the original. The original is the only one I will swear by. I will say that you need to hang the razor up with the wall mount that it comes with. I have ruined brand new razors before by laying it blades down on the shelf in the shower. If you do this the moisture strip swells up with water and then dries that way. Then the strip is raised up so much that the blades can no longer get close enough to your skin, so make sure you mount it on the wall to dry between uses!! I would love to get lazer hair removal or something more permanent but as far as shaving goes, I don't think you are going to get any better than this!

Although it makes my skin very smooth, it makes my legs insanely itchy after I get out of the shower. I get itchy red bumps after using this which has never happened with another Venus razor before. I wish this worked for me because it does work well, however it's not worth how itchy and painful my legs feel after I shower.

Best disposable razor. The other Gillette razors such as the spa razor, come with gel strips that shrink and then fall off within 4-5 shaves! This razor doesn't have those gel attachments instead it has thin gel on the razor that never falls off. So this razor head really lasts a long time, the longest I've experienced from a disposable razor head. It leaves a clean soft and smooth shave, rarely leaves cuts, and gives a sleek feel. This is the only razor I use and I've continued to repurchase it many times since originally buying it.

This razor lasts forever! Most amazing disposable I have ever used. I've heard it helps if you make sure it can dry out between uses. It's pricier than most other disposables, but it's totally worth it!

I've been using original 3 blade venus razors for years.So i decided to give this razor a try as i thought this one maybe better than the original one.my theory was : extra blades = extra close shaving so i could save at least one day without shaving .but i was wrong.it didn't help to hairs growing back slower . in fact i get stubble quicker than usual. I can't believe how 5 blade razor can leave so much stubble.5 blade is too much for my skin btw. it didn't give me nasty cuts or nicks but gave me razor rash and itchy feeling.It is also ridiculously pricey.i would never buy again.i'll stick to my old and trusted originals,

Once you try these all other razors pale in comparison. These razors give me the closet shave I've ever had. Every time I try another razor to save money I come back to these. Incredible!!