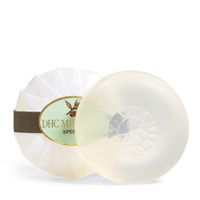 I have only tried this bar of soap in a small sample size from their catalog which got sent to me I was not too impressed with it! It's the same as the Clinique mild bar soap! Meaning it's pretty drying on my face! The only good thing was that it was fragrance free &amp; cleaned my oily skin fairly well but it still dried me out! Although I knew some who used to buy this bar of soap &amp; whenever she got it it was beautiful wrapped ???? like a gift! LOL! But ultimately it's nothing special just like a trypical bar of the Clinique soap &amp; despite having some olive oil in this it still very drying on my skin! I think I hve to give up using bar soap on my face ????! it's just too stripping!

Ok WOAH. I ordered this months ago after using a sample of the olive and repurchasing the olive and this along with it. I just finally tried it and yea, it is way drying on me. (I feel the same about the olive soap too, to be honest). Now, I admit I have barrier issues where too much over drying caused me to be sensitive, and get even more break outs. BUT I was using a really emollient cleansing milk for the past month and just recently decided to quit that because it was causing clogs. So even though I will say my barrier isn't repaired, it wasn't horrible either and this just felt extremely stripping. I had to slather on the moisturizer after, it was scary. I'm surprised given the ratings, name and even ingredients didn't seem too bad. But I just don't think bars are for me. I gave it a 3 though because it lathered nicely and had a nice feel but this is the kind of thing that even for normal skin (or even oily skin.....) I'd say be careful because frequent use will strip you without realizing it and you'll over produce oils. I think this might be ok for someone with normal to oily skin after heavy makeup or a work out but NOT daily. And if you're sensitive or damaged like me, I'd avoid.

I love DHC soaps and cleansers, including this mild bar soap. They sent me a sample which I use when I travel. I liked it and purchased a full size bar. The full size bars last a long time and therefore make the initial price worth it. I have combination skin with my T-zone and forehead being oily. I like a soap that really lathers well because I equate this with being able to cut through the oil. It lathers very well on my face and removes all makeup and oil. It also rinses very well at the sink which is hard to do in my small bathroom sink (I can make a big mess). My face feels very fresh and clean afterwards. I can't detect any scent, and actually wish this company would scent more of their products. They also sell a container to store it in so it can dry between uses, which of course I bought. I would be handy for travel also.

I remember trying this in high school to try to control my acne. This just left my face feeling dry and tight. I think this would work better on other people, but for those with teenage skin or for those with acne, this just makes your skin tight and causes your face to product more oil.

Would I buy it again? How many bars have I already bought--countless. I can't be without this soap. I use the &quot;double cleansing&quot; method with the DHC Deep Cleansing Oil. Apply oil, massage in, rinse, then wash with this soap. Sometimes I use the Clarsonic with the soap. My skin has never felt better or looked cleaner and clearer. When I do this at night, there is no makeup residue left on the towel, and my toner and moisturizer sink right in. It has no fragrance either. I leave mine on a small leaf-shaped soap dish DHC sells. You can also buy a covered container as it will melt if left out in the shower. It lasts a long time. I have mature skin, and this is not too drying.

After my disastrous venture with Clean &amp; Clear Advantage 3-in-1 Exfoliator (see separate review) I needed a mild cleanser that would not over dry my trentoin-treated skin. I remembered using this soap long ago, when I could afford buying more than one DHC product at a time (their prices keep going up). I bought a couple of travel size bars that were on sale and I remembered why I loved this so much. It leaves my mature, oily-but-dehydrated on-medication skin squeaky clean, but not over dry, and it does not irritate it, either. It's on sale at DHC for $13.50, till the end of March. I got a couple of bars. Money well spent, for me.

I am using a sample of this which is really tiny. I'm glad this is just a sample because I feel like it does nothing. It works up a decent lather, but that's just about it. It doesn't seem to have any quality or substance. It leaves your face feeling squeaky but not really clean, just dry and tight. It's as if a larger sized bar has been used up and all you're left with is the centre that is quite useless and has lost it's essence.

I got this in a DHC travel set I bought for a short trip. Personally I do not like facial soap as I find they are difficult to manage. However one thing I have to agree is that a bar lasts you much longer and it's more economical. Overall no complains i like that's it's mild and did not dry up my skin but still gives the squeaky clean feeling. However, I cannot give it a 5 because as with most DHC products, the olive oil ingredient caused me oil seeds... =(

I have been using this soap for almost 10 years now. My skin has changed quite a bit during these 10 years, but this soap still accommodates to all my needs. I remember when I first used it how amazed I was to feel my face feeling so smooth and gentle after the wash. And very soon after, my breakouts slowed down. When I get lazy and stop bringing it to the gym and use something else it breaks out. (Ok, let's be honest a soap bar it not very convenient to use at the gym.) Now, I do bring it with me when I know I will be working out. Someone mentioned this soap gives you that squeaky clean feeling. I agree, but it is not drying. This soap does not claim to moisturize. It is supposed to help maintain your skin’s moisture balance. So obviously if your skin is dry you would want to put moisturizer on right after you wash. Which is exactly what I do and it has worked for years. I like to let the soap do the cleaning, and the moisturizer to do the moisturizing.

I would say that this product is just average and to compare on other products with the same quality, this is expensive. There are other cleansers which are at the same quality but at a cheaper price. Anyway, this soap is gentle for anytype of skin and it moisturise your skin well. I had a sample to try and it can last for a period of time(my opinion) because I'm still using it now. I think that this type of soap are not hygenic enough, I prefer those in tube. This is just a simple soap which cleanse your face and I doesn't feel much difference after using it. The reason for me not buying this product again is it's too expensive and it's nothing special than those cheaper ones.