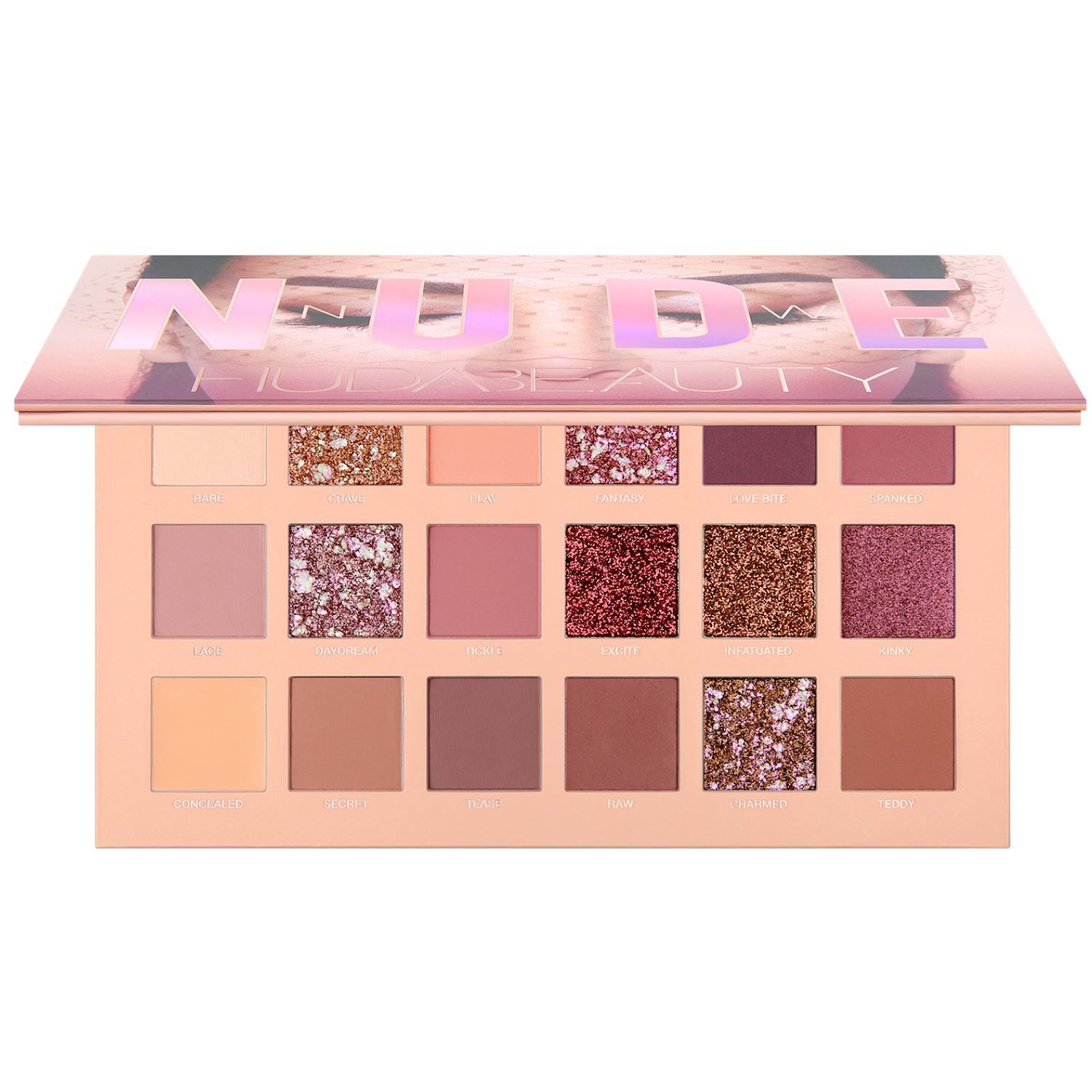 LOVE LOVE LOVE this palette! On a pricey side but will last years. Colors are beautiful and look amazing with my green eyes. Use 'glitter glue/primer' before applying glittery shades.

I’m obsessed with it! The colors are amazing and they blend super easily, they stay and don’t smudge.

I'm not keen on Huda's experiments with her duo-chrome shadow finish in her other large palette (the duo-chrome toppers in Desert Dusk) so was hesitant to get the New Nude palette; however these speckled ones are gorgeous and buttery [Crave, Fantasy, Daydream &amp; Charmed]. They almost look molten as they gleam so vividly. Just stunning. Just remember; it's best to use a finger, sponge-tip applicator or Huda's Fender Blender to apply this finish. Huda's pressed pearl metallics are my favourite shadow formula and we get a fantastic warm pink shade [Kinky] in the New Nude palette; as a pink shadow lover, I'm delighted - like with the speckled formula, the metallic is buttery and almost-molten in appearance. There are ten soft mattes in delicate berry tones, rose and muted copper and golden taupe's in New Nude. The mattes are a world away from the ones in Huda's first eyeshadow palette [the original Rose Gold palette - I don't have the Remastered edition to compare]; they are buttery smooth, mega easy to blend, great to mix together to create new shades and they have next to no fallout. They're softer &amp; easier to blend then the brand's Obsession palettes and the Desert Dusk palette - the formula reminds me of Charlotte Tilsbury's matte shadows. Finally; the pan labelled 'Concealed' is not a shadow, it's a cream base meant as a primer. It is actually a really good primer, especially for the shimmers, metallic and the glitters - almost as good as using a glitter glue. All of the shadows are non-fading, and I haven't experienced any creasing - I apply them in the morning and they'll still look good in the evening, when I remove it. The metallic shades have a bit more fallout in comparison to the other shadows which have very little, which isn't a dealbreaker for me but I still thought I'd mention it. Fallout in shadows doesn't really bother me as I do my eyes before my base - all pigmented &amp; softer shadows have fallout, so I do think that all good-quality shadows should kick-up a bit. On the not-so-great side; I don't think that the two pressed glitters [Excite &amp; Infatuated] line up with the soft/traditionally feminine/everyday theme of this palette, so would have loved the glitter shades to have been in her pressed pearl formula instead.There's nothing wrong with their formula so I decided not to remove a lippie - I'm just not a fan of glitters. The cream base idea is good, but it's not really practical; it does work really well, but why put a cream in a palette with fifteen soft powders and two pressed glitters - and why put it in a pan that's the same size as the shadows when it's meant to be used every time you wear something on your eye? I have around half a dozen small palettes and two other large palettes by Huda Beauty, and I haven't bothered looking at them since I picked this up on it's date of release - I've not been using any of the fancy new stuff I go for Christmas much either. Between this and the Kat Von D Lolita eyeshadow palette, I've been feeling my preferred makeup style swinging back towards the soft n quieter, almost-neutral side lately and this palette fulfills all my needs and wants.

I have Huda’s previous palettes and really couldn’t wait to get this. I prefer talc free formulas on my mature lids and the larger palettes always are. This is a warm toned pallette and not cool in the slightest, which was the first disappointment. Although the shades look like they should be neutral/cool they apply differently on the lids. So if you were looking for a cool pallette, this may not be for you. The shadows are all well pigmented, not much fallout and the mattes blends beautifully. The addition of the concealer is a bit odd regarding where it’s placed and it does get bits of eyeshadow fall into it. I would have preferred another shadow here to be honest and probably a much deeper colour as there isn’t really one in the pallette. The shimmers....they are a disappointment. I have tried them on the concealer, without, with brush and my finger and they always apply and look the same. They all look very similar on the lid but they just sort of disappear into a light glitter ‘topper’ look within a couple of hours and I have dry lids. I much prefer the shimmers in Anastasia palettes, where they do all look different and they remain looking like that on the lid, until I remove it. I’m not reaching for this pallette unfortunately as I’m not liking it that much.

The most visually stunning palette release of 2018. I mean that with everything in me. The first time I saw this on Huda's YouTube I thought it was Photoshop sorcery. Beloved, it is not. These crackle shimmers and decadent glitters go on true to the representation in the pans. I do not wish for anything to be changed. This is what I wanted modern renaissance to be. I use my fingers for the shimmers and glitters. My first Huda purchase and it opened the floodgates. I have purchased most of her obsession palettes. Would certainly repurchase. So so beautiful!

This is the first palette I purchased from Huda Beauty. When I saw the colours and how a lot of the shades lean cool I knew I had to get this. Plus I'm a palette collector so that is my justification ;) About me blonde hair, green eyes, NW20 or below very cool undertones for reference. I think every colour in this palette works on my skin tone. I've been wearing this palette everyday since I purchased it and I just love it. The mattes are so soft and silky plus they blend so well. Smooth and effortless I would say. It comes with a concealer shade that is the base/or primer but, the shade is very light. It does work very well as a primer. Their is one pressed pearl shade called Kinky that is so beautiful and pigmented I enjoy using it. The 4 multi- reflective shades are super beautiful! I was skeptical because of how the texture looked but they are bomb! I apply them to my lid with my finger or a firm brush I prefer synthetic and they look so amazing on. Finally their are 2 pressed glitters. Which I thought I wouldn't like because I've never had much luck with glitters. But these are creamy they feel so good when you apply them. I again use a firm brush and I pat it on. These shadows stay on till I take them off with almost no fallout. That's what really impressed me was all these fun textures had applied beautifully and they didn't fall out under my eyes. I am truly impressed with this palette. These mauvey/pink to dark mauve shades look amazing on green and blue eyes. Another thing I love is I can do a whole eye look with this palette. So it's excellent because it enables me to try so many different looks in 1 palette. I will repurchase this I don't think I have found until now for me a very cool tone friendly palette. The actual palette is very pretty. The shades I'm just so happy with. Plus the awesome fact on me that there is hardly any fallout with these types of products just makes me so happy! I think this product is pricey but it really does work great and the shades last and stay vibrant. This is an excellent palette that I feel a lot of pale ladies will like. I don't know how this would work on darker tones. For me I love it and I really just enjoy using it so much. Recommended.

I ADORE this palette! The looks you can create are so sexy and romantic, I can’t get enough. The pigment is very strong and the glitters are incredible (provided you use the concealer and your finger to apply the glitters). I’ve never seen a palette as breathtaking as this one, it’s a big wow. I’ve even had compliments from strangers on my eye shadow asking where it’s from. Highly recommend if you like plum, dusty pinks, and golds.

Sigh. Yet ANOTHER warm palette. I look dreadful in warms. When I purchased this online, I thought it was a cool toned, pink palette. If you like using warm eyeshadow colors, though, this is a beautiful palette. The glitter is a bit heavy, but if you're into the sparkly look, you will love this. The mattes are very pigmented, and there is very little fallout. One square of the palette is a concealer-based cream, which is good for helping adhere the glitter shadows to your eye lids. Beautiful shades, but not for me. I wouldn't call this a nude palette, because most of the colors are reds, purples and plums. If you enjoy those shades, I'd definitely recommend. If you are like me, cool-toned, I would suggest you check it out in store before purchasing.

I must admit that I usually love Huda's Eyeshadow Palettes. I love the first Rose Gold Eyeshadow Palette, it made using mattes, shimmers, and glitters very easy. Same with the Desert Dusk, love that palette with its pinks and purples. The Rose Gold Remastered Eyeshadow Palette was a little disappointing, the shadows just aren't the same consistency, and I hardly used it. Thankfully the HUDA BEAUTY New Nude Eyeshadow Palette seems to be mostly back to the same old formula and color options. I like the matte shades, although they do have a touch of fallout, they are buildable and blendable. The shimmers are more difficult to work with then other palettes, you really need a very firm brush or fingertip. The glitter shades are really wasted on me because the only way to apply them is with your fingertip, and this is something that annoys me Overall this is a good palette, if you are needing these shades it's worth picking up or going to the store to swatch it in person. My video review can be seen here: <object onclick="ga('send', {hitType: 'event',eventCategory: 'Ajax Interaction',eventAction: 'PlayVideo',eventLabel: ''});" width="360" height="320"><param name="movie" value="https://www.youtube.com/v/vamV0IYi3eQ"><param name="wmode" value="transparent"><embed src="https://www.youtube.com/v/vamV0IYi3eQ" type="application/x-shockwave-flash" wmode="transparent" width="360" height="320"></object>