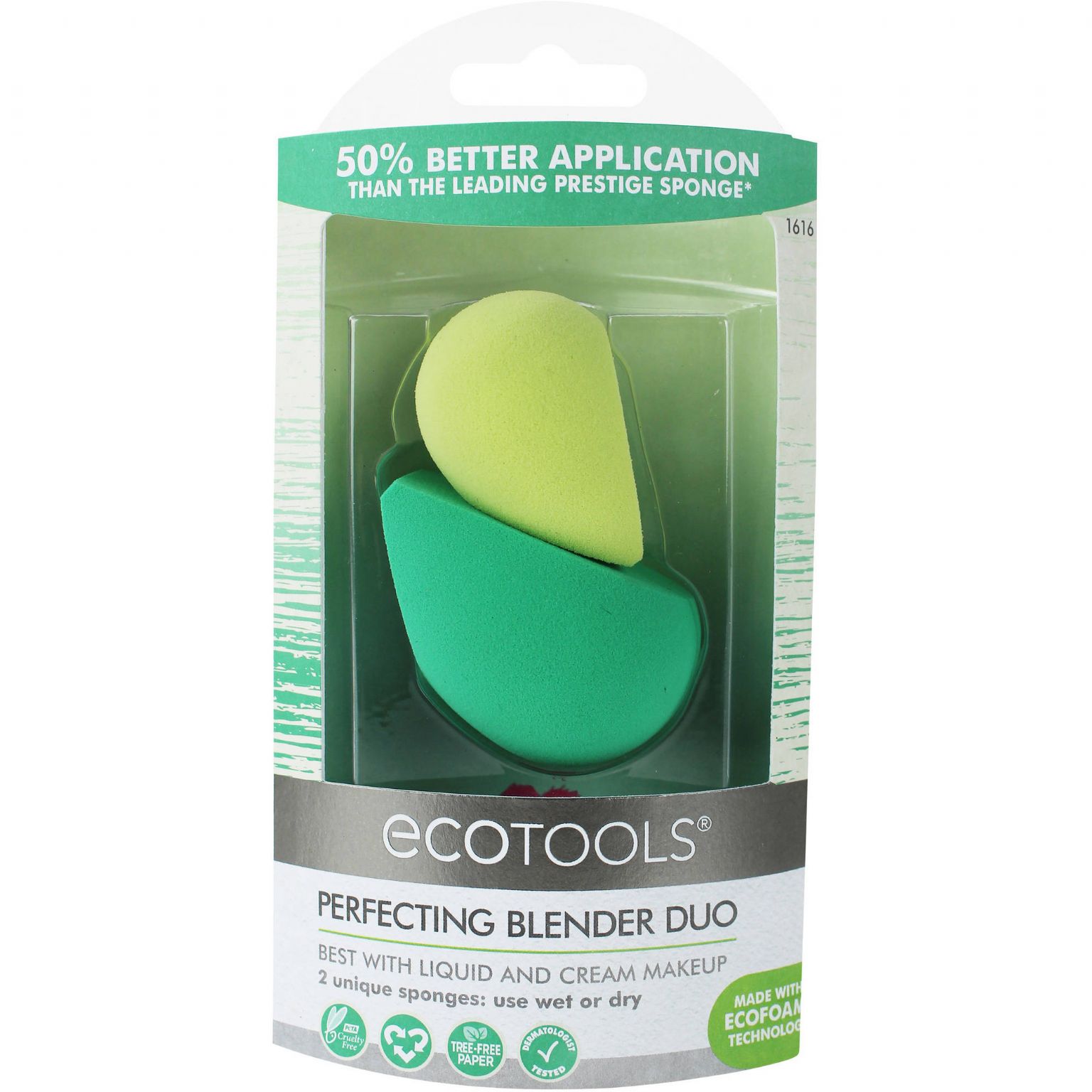 The big sponge tore up in 3 months so not very durable.

I got these after seeing so many good reviews and being tired of purchasing Beauty Blenders. This duo is a GAME changer. The face sponge gets HUGE when wet and applies my foundations and tinted moisturizers like a dream without soaking up all of my product and it keeps my dry skin moisturized at the same time! The smaller sponge I use dry to blend out my concealer after applying it and letting it dry down a bit for more coverage (thank you auntie Jackie Aina!!! ????) The small sponge does a phenom job of blending out my concealer! I love the different sides of the sponges and find I use them a lot more than the butt of the a Beauty Blender. I hate the Real Techniques sponge (too hard) and was a die hard fan of the Beauty Blender, but I can’t go back to that knowing this exists and is half the price for the duo and only $5 for the face sponge. TRY THIS!!!

I only purchased the larger of these two sponges, and let me tell you, it swells up to ginormous proportions when dampened. The texture is different than other blending sponges I’ve tried. It’s not as soft or squishy as the Beauty Blender, it doesn’t tear like the Real Techniques sponge, it almost reminds me of a sponge you would use to wash a car with, those big brick sized sponges but without all the large holes (obviously). The best feature is the shape. I like the rounded bottom and chiseled sides - one of the flat edged sides is larger than the other so it is very versatile. It makes applying foundation quick because it is so large, but I still spend a fair amount of time blending because of the texture of the sponge and because I like my foundation to look natural on my skin. It takes some getting used to but once you do it is a really great blending sponge that easily cleans up like new which I can’t say is the case with the Beauty Blender. Great price for a great product. I will repurchase when I need a new one.

This review is for the big sponge - I haven't used the little one yet. I bought this right after my dog ate my BeautyBlender (she shows no remorse AT ALL!) so I think I can make a fair comparison because I have fresh memories of both of the sponges. I must say, in terms of results, I honestly don't see a big, if any, difference. At first I thought it would be harder to blend my foundation with the Ecotools one because it definitely feels stiffer and not as bouncy as the BB and it doesn't expand as much when wet but it actually does blend it just as easily and quickly. I hear people say it absorbes more product than the BB. I haven't noticed such thing but even if it is true, it is not a problem for me since I can never use up my foundation before its expiration date, anyway. I definitely don't think it's &quot;50% better&quot; than the BB as the package promises but I do think it's just as good. I'm happy I tried it and I'm definitely not going back to giving twice as much money for the same results.

I wish there was a review just for the larger sponge because these two sponges are definitely not equal. I adore the larger sponge and it's actually knocked the Beauty Blender off as my favorite makeup sponge. (the only sponge I've tried to even come close) It's beautiful dense and seems to work better on my dry skin as it seems to retain slightly more moisture (without being wet) than the BB. It's so soft and wonderful.. Works great for liquid, powder, cream... Then there's the little one... I don't much care for it. It isn't made with the same materials as the bigger version. I think the little one is meant for powder which is why it's more stiff? I have no clue but I never use it. If I could buy a double pack of the big one, I would be all over it or even just the large one alone... but unfortunately it's nearly impossible (at least where I live) to find just the big one by itself... So I'm stuck with the little one riding its coat tails... That being said... this duo is usually around $8 so I can deal with it. MY ONLY gripe about this product overall is that you have to be really careful when washing them. They will tear... and much easier than the BB tears. I've had my original BB for over a year (mind you, it's not everyday use)... I only stopped using it because I imagine after a certain point, even if it's still intact that it's not good to continue using. Whereas the EcoTools one I accidentally made a little tear within the first few washes.. so just be careful especially when squeezing it out

I bought just the large green sponge instead of the duo, but it's the same green sponge in the duo, just single. It was around $5. This is a much denser, firmer sponge than the RT which I've used and have, and I'm on the fence about this one. It expands a ton when damp, and does blend your foundation beautifully, but there are times where I feel it absorbs more than the RT. It also ripped the second time I washed it - and I'm pretty gentle (my RT never ripped when I washed them DAILY). I think the main reason this ripped is because of how large and dense it is. I'd debate about repurchasing, but I think I'll try the AOA Wonder Blender first - which is only $1.00 or their new softer version for $1.50. For the price of even the EcoTools sponge, I could get 5 sponges to try out.

This review is for the larger sponge only. It's sold separately with a metal stand that you can keep your sponge on, which is a great idea. I'll probably never actually use the stand, because my cats will get a blending sponge in their clutches and play with/destroy it given the opportunity, so I have to store mine in a drawer. But still, it's a nice touch. This is my favorite blending sponge ever. I've never tried the original Beauty Blender sponge, but I've used Real Techniques and several other drugstore options. The RT one was my holy grail for years but the quality started deteriorating more and more with every sponge I repurchased, and I knew it was time to find a replacement. This sponge is soft, yet firm enough to perfectly bouncy. It expands excellently when dampened. Doesn't soak up a ton of product. It's easy to clean and hasn't torn in the month I've had it (which... a month isn't much to ask out of a blending sponge, right? But that was about how often I was having to replace mine over the past year or so when I was using other brands.) I appreciate the shape of this thing (2 flat sides which meet up at a flat pointed end, and then your typical rounded bottom part.) I'm also fond of the green color which is much nicer than light orange IMO. For only being around $6 at Walgreens, it's amazing. Would repurchase for sure.

This review is for the large sponge only (they sell the large ones only along with a handy drying stand for less than the cost of the duo pack). Comparisons: While this is not a dupe of BeautyBlender, this is fairly close. It is not as soft as the BeautyBlender (it’s still pretty soft), it doesn’t expand as much as the BeautyBlender when dampened, but I do like the flat sides of the Ecotools sponge instead of pointy end that the BeautyBlender has. Honestly, BeautyBlender is my favorite and the Ecotools sponge is just not a dead on dupe if a BeautyBlender. However, if you don’t want to splurge on a BeautyBlender, this one is the best that I have tried from the drugstore (I have tried the L’Oréal Infalliable sponge [too expensive for its performance], Real Techniques Complexion sponge [absorbs too much product and a bit filmsy], and cheap o Aliexpress sponges [smell weird, absorb too much product, and too dense]). Finish: I dampen the sponge by spraying a few spritzes of Mac Prep + Prime Fix+ on the bottom of the sponge, dot some foundation on my face and “pat” away with the sponge. The Ecotools sponge does not absorb a bunch of product, and the finish between Ecotoolsand the BeautyBlender is very similar. Unless you look really close you will not tell. It feels nice on your face and leaves a beautiful finish once you get the hang of sponge dampness based on the type of foundation you use. Definitely pick this up if you don’t want to spend a bunch of money on a sponge.

This is an amazing beauty sponge for a very affordable price. I really wish I only bought the big dark green sponge because I know I would never reach for the mini. One point off for that. This is definitely not a dupe for the original BeautyBlendef but I think in some ways I actually more than the BB. It is more firm, which I preferred. I also love the precision top edge for concealer/under eye backing as well. It does tear easily too but I feel like all beauty sponges do the same thing so can't really complain. I highly recommend. For a fraction of the price to the original BB this is worth trying out. I find that I am also reaching for this much more often than my RT sponge as well. Would repurchase - try it you won't regret it!

This is a review for the larger sponge only. After dropping twenty dollars only to receive a dud beautyblender (wouldn't stay wet, super dense, ripped after first wash), I decided to give this blending sponge and the Real Techniques one a try. I ended up loving this sponge more than the Beauty Blender and the Real Techniques sponge. It blends everything beautifully and leaves behind a natural/radiant finish just like Beauty Blender but doesn't absorb so much foundation like the Real Techniques one. I would repurchase and would recommend this sponge! [Edit 3/31/18: I found that this sponge doesn't last very long. I have bought it multiple times and it starts to rip after a couple of uses. I'm not rough with washing or using it so it has to be the quality of the sponge. Because of that, I have dropped my rating down to three stars.]