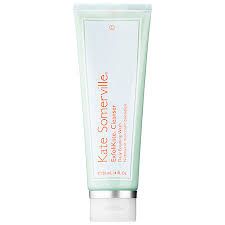 Love this stuff! I've got that nice combo of fine lines and some hormonal acne so finding a product that addresses both is always a good thing in my book. This cleanser calms my skin, smooths it out and reduces acne and any bumpy areas on my skin. Sometimes I wash my face with this a little longer than a minute, maybe a minute and a half, just to get the treatment a chance to sit on my skin a little longer for effectiveness. Works really well.

I will definitely have to update this review at the one month mark, but I've used this cleanser for the last few days and am really happy with it so far. I know it's too soon to get excited, as that's just how acne-prone skin works :( What I like - It doesn't irritate my skin, it doesn't seem drying, it gets off all my makeup and sunscreen, and it leaves my skin feeling super soft. I had a concentrated spot of closed comedones on my cheek that wouldn't budge, and between switching my concealer and using this cleanser at night they're finally purging, but without any breakouts in areas that didn't already have something going on. My skin looks glowy. What I don't like - I bought this at Sephora when I was returning a different face cleanser, and the lady at the counter was super enthusiastic about this one as she said she had similar problems with the cleanser I was returning. I was uncertain because I didn't know if I wanted to fall in love with a cleanser whose full size retails for $38USD. I bought the travel size based on her enthusiasm for it (she was also really nice), and so far plan on using the entire tube, and buying the full size if I'm happy with it. I like the smell but it's the only scented skincare product I use. Would always prefer using an unscented product. I also know that whatever is in this exfoliating is on the face for a very short time, but it seems to be working. Month Update: This product, used at night rather than the recommended twice a day, has helped some problem spots on my skin purge in a way that felt gentle, and it's an all-star cleanser for removing makeup and sunscreen efficiently. As far as glowiness goes, I don't think that continued use has helped tremendously in that arena. I still have the majority of the travel sized tube I bought left and will definitely finish it and update again, but I think that I would still rather use a less expensive daily cleanser, and invest more in other aspects of my skincare regimen. Long review, but another update: I've continued to use this cleanser, but I'm starting to suspect that the "purging" is going on for too long. I might continue to use this, but I'm considering going back to my old cleanser. Not sure if it's necessary to use an exfoliating wash every day either. Took off another lippie for the continued pimples. Final update: I stopped using this and my skin is CHILLING out, finally. I think this actually broke me out really badly - I was getting way more pimples, all the time. Bummer, cause I sort of miss the smell.

I have been using this facial cleanser for ~3ish weeks now in the morning, and at night. My skin has improved dramatically since I started using it. I will say that it made me break out for the first couple of weeks due to the active ingredients sloughing away skin cells on the top layer of my face. This allowed stuff in my clogged pores and pimples to rise to the surface. Everyday my skin gets better, though. I do have dry/combination skin that is quite sensitive. Pros -Smells really great; light citrus-y scent -No exfoliating beads in sight -Simple packaging -A little goes a long way -Lovely lather Cons -pricey -a little drying I follow up this facewash by patting some alcohol-free cucumber witch hazel on my face, and then adding some Lush celestial face cream. This keeps my skin nice and hydrated afterwards. Because this contains lactic acid, I also make sure to wear sunscreen during the considering this exfoliator increases cell turnover on the face.

This product is my favorite cleanser. It doesn't strip my skin, cleans my skin great with my Foreo, leaves my skin soft and ready my serum and moisturizer. It is reasonably priced and smells wonderful. I also find it refreshing, and leaves my skin glowing. I am 54 and left this product for a few weeks and tried LaMer foaming cleaner, huge waste of money and stripped my skin, SKII oil, did not like it at all and LaPrarire scrub. None of these high end cleaners compared to this. I ran back to Kate Somerville. Reasonable, smells great and does a great job. Give it a try, you will ♥️ it! I think Kate Somerville is underrated, she has a beautiful line.

I have sensitive dry combination skin prone to breakouts -- very difficult to manage. I love this cleanser. I received it as a sample at Sephora and really didn't think it would work for me (so few samples do). Turns out it is great! It has significantly helped to keep the flakey dryness at bay, in fact I've not really experienced flakey skin on my face since using this product. I also find it helps with my breakouts without being too strong; it just seems to calm them down. I feel like my skin is glowing after switching to this cleanser. The best part is that it is not overly drying so my skin doesn't feel tight, even if I wait a few minutes to moisturize, yet my face feels perfectly clean too. I hate scents, though like slight citrus smell of this cleanser. It also has a lovely texture that feels nice to apply. I used to use Clinque dry/combination cleanser for years, and find this to be a significant improvement and far less drying. I recommend this product to those with sensitive dry combination skin. I'd still like to get my breakouts more in control, but this cleanser has made a huge difference, especially with my dryness.

I may repurchase this. I may also hunt around more. This does not dry out my skin and leaves my cheeks nice and soft after using every single time. I do not notice any changes in my pores. They are clogged when i use this and scrub! i love the idea of all the acids and enzymes working on my skin, but wonder if for daily usage if that is actually as beneficial. Plus its being rinsed off. who knows, they say everything counts and this may be a good option if youre looking for antiaging and anti clogging without too much of any ingredient. it rolls into my routine effortlessly.

Recently my skincare routine has changed from combo to quite dry and my usual Purity cleanser was beginning to really dry out my skin and actually causing more breakouts. Yet my Clinique balm was too oily for every day use now in the summer. So I hopped over to Sephora and received two samples, one being the Exfolikate cleanser. I've recently been focusing on daily exfoliation and lactic acid/enzymatic treatments lately which have been working wonders on my skin! First I tried the other sample of cleanser I received and noticed a HUGE pimple two days after using it each day, so that's a no-go! Then I tried the Exfolikate and I absolutely love it! The instructions say to cleanse for 30 seconds so you get the maximum benefits of the enzymes in the product. You won't have it on your face long enough for the lacic acid to work, but hey at least you're trying! I felt like it took my makeup off very well and no foundation stains were on my white towels after! My skin hasn't felt the least bit over dried since using this for about a week, no pimples, no complaints! I definitely feel like it gives a great cleanse to my skin and just the right amount of extra help in my routine! Grab a sample if you're looking for a bit of exfoliation help, this could be a great addition to your regimen!

I used this for about 2 weeks before returning. Price was $48 (Canadian) at Sephora, which is pretty pricy for only 4oz of product...I could probably get over how expensive it is based on that fact that you really only need a pea-sized amount to wash your entire face. So I can imagine it would last you a while. I just found that it was too drying on my skin. I'm using a few acne treatments that are already pretty drying so, this didn't help. I went back to using a gentle cleanser and my skin seemed to go back to normal. I'd get a sample from Sephora before buying the full size! Might work best for someone with oily or combination skin.

This "exfoliating" cleanser was recommended to me by a sales associate when I asked for an exfoliant suitable for sensitive skin. I had my doubts about using a cleanser, but I was in the mood to try something new, so... here we are. This cleanser comes in an easy-to-use squeeze tube with a flip cap. It's pricey for a cleaner, but a little goes a long way. It is used with water like a traditional foaming cleanser, and it makes a very light lather. It is non-irritating with a faint, pleasant smell.The exfoliating qualities are very subtle, to the extent that the name is almost deceptive. For instance, I have small flaky patches on either side of my nose that seem unaffected by using this cleanser. I also found the cleanser it to be a little drying. So in the end, a product I wanted to use to keep flakiness at bay sort of aggravates it, if anything. For the price tag I would not repurchase.

This is a nice cleanser, gets in deep but I found it very drying. I would finish this but I would not repurchase since for the price, you can do a lot better. I think Purity Made Simple is more effective without the harshness. There is no exfoliating action so this could be good for oily skins. Neutral scent, a little foaming and rinses clean easily. I was curious to try this, I would say give it a shot if you are keen, but don't expect the world from this. I feel that there are much better options for much less.