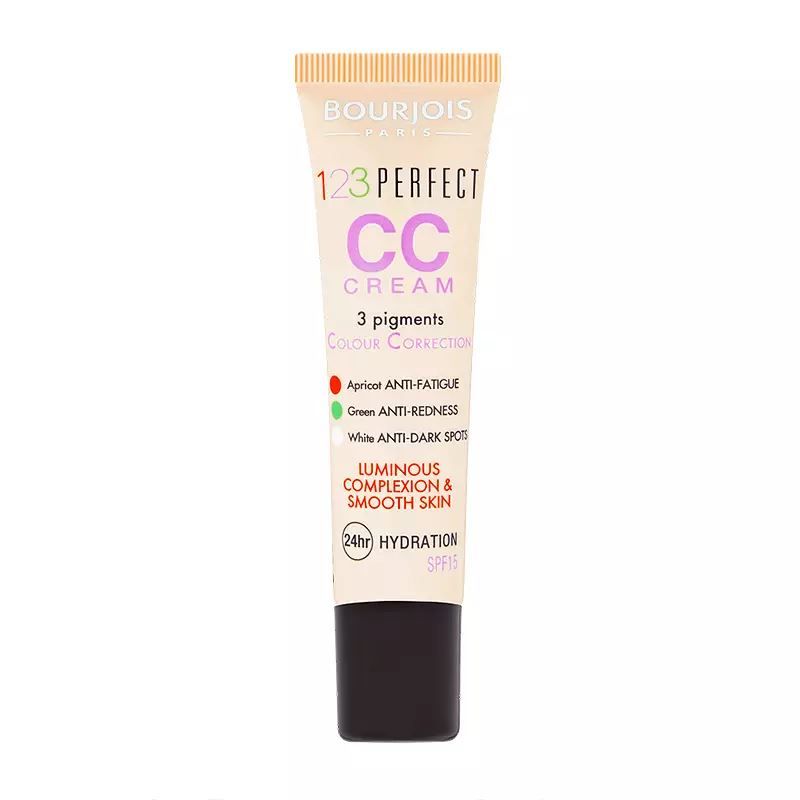 This leaves a dewy finish, and I think that’s why it emphasises textural flaws for some people since you can see the light reflecting off in different directions. If you have bumpy skin, this won’t help. But if you’re after the dewy skin look, use this and don’t set it with powder. If you have flaky skin, don’t set with powder, else they will definitely appear throughout the day. In short, dry-normal skin folks will like this better than oily skin folks. Just be careful coz this transfers easily if you don’t set with powder. I won’t say that this is entirely natural, but without setting it, it comes pretty close to looking like it’s just skin. I dot the CC cream all over my face, then use an air puff to tap it around. Missha or Etude house air puffs work well. This leaves an even and dewy finish, and doesn’t cause dry skin flakes to come up since you’re patting them down. Coverage is decent as some people have said. Helps even out the skin. The tube packaging isn’t the most attractive, but it keeps things hygienic. I store mine with the tip facing upwards, otherwise when dispensing the product, I may forget that I’m not supposed to squeeze too hard and end up with a mess.

Weirdly liked this more than the City Radiance Foundation. Found that it provided more coverage and the colour matched me better. I am a MAC NC 15 i.e. pale with a yellow/cool undertone and wore this in the Shade '31 Ivory'. It does oxidise slightly, but overall it's not bad, especially for everyday wear. Note: You definitely have to set it, otherwise it's streaky and slides all over the place. Might just be my dry-combo skin though. Pros - Affordable - Light to Medium coverage (buildable) - Easy to apply, liquid consistency (I smear it on with my fingers) Cons - Limited Shade Range - Not Long-wearing - Sometimes slides off oily areas and clings to dry patches

fabulous for the price. a good everyday coverage for the price you're paying. I always get compliments with this coverage. it gives a nice dewy finish. I wouldn't recommend this oily skin as I feel it can slide off the face. quite moisturising, I apply it with a moist beauty blender.

I agree with other reviewers on that it's not what we occasionally expect a CC Cream to be.I expected sheer coverage and dewy finish but this one has an almost moderate coverage with a semi matte-semi radiant(definitely not completely matte) finish and while it's more on the liquid side(not a thick cream) it feels more foundation like than like a CC cream or a tinted moisturizer and can feel slightly heavy if you're not used to foundations.(it's coverage is much more than Bourjois City Radiance) It claims to have three pigments to colour correct skin :apricot(anti fatigue)-green(anti redness)-white (anti dark spots).my skin definitely needs some colour correction,I have redness on my cheeks,dark cycles under my eyes and my skin can look dull sometimes as I'm an Asian(middle Eastern) and a cigarette smoker.this one does a perfect job in evening out my skin,there's no signs of redness left and my skin looks healthy but still I'd better use a concealer under my eyes if I want to completely cover my dark cycles. I have it in shade 31(Ivory) which is light enough for my NC15 skin but has a pink undertone,I don't dislike it since it's not too pink and doesn't look bad on my neutral toned skin and makes my skin look less dull and healthier but I wish it had a light color with slight yellow undertone too(32 is a bit dark for me).I like that it doesn't oxidize and has a decent longevity on skin Bourjois CC Cream has SPF 15,not enough to skip sunscreen but it's better than nothing.it claims to hydrate skin for 24 hours and give us a luminous complexion and smooth skin.well it really manages to do that.it's almost liquid like texture feels moisturizing on skin and my skin feels smooth while having it on my face but I can't skip moisturizer before putting it on.it looks it's best when I moisturize my face,then put it on and blend it with a damp beauty blender(I use Caudalli grape water spray to moisten my BB sponge),and looks good when I don't use too much of it(it's better to use a concealer for covering up places which need more coverage),I usually set my makeup with Nuxe or Mac spray not a powder because powder can look too dry on me and my skin rarely gets oily/shiney but you'd better powder on the areas you have lines as it can settle in lines.it doesn't have a strange scent(more like a lightly fragranced sunscreen) and doesn't irritate or breakout my sensitive,acne prone skin I like it's packaging as it's very travel friendly and doesn't look cheap eventhough it's a simple plastic tube but be careful not to squeeze the tube or you will have a lot of product coming out of it's nozzle All in all I like it while I can't say I love it.I probably will repurchase it as it's widely available and it definitely worthes 7$ ! I find myself choosing it to take to travel instead of my other foundations/BB creams Bytheway,I also purchased Bourjous CC concealer,loved it at first but stopped using it as it was too drying on my already dry skin and showed up dry patches I have under my eyes.I mentioned that to say it's texture is nothing like this one,it's very liquidy,sheer,not moisturizing at all and doesn't have much coverage.if you want a concealer with a similar texture to this CC cream try Rimmel Match Perfection Concealer P.S: my mom tried it and she loved it so much that sent me to buy one for her instantly and told me it's going to be her new HG! she's 52,has normal skin,with some dark spots(pigmentation) on her cheeks and few fine lines.her skin looks at least 20 years younger after wearing this.it really looks luminous(but not dewy),smooth and evened out.she didn't use a concealer and this one and a sunscreen were the only things she used.it's not like her own skin,but not like a heavy makeup either,it's more like a healthy and bright skin which has used some sunscreen

PROS: - matte, but not accentuating dry parts (It would be good for normal, normal to dry and normal to oily skin. Not good for very dry and very oily.) - coverage is medium (I don't need an under eye concealer and redness on my nose is covered. Concealer is still needed for big spots.) - looks natural, not noticeable (on areas without wrinkles) - cheap - feels light CONS: - gets into wrinkles (This can be avoided by applying just a little bit on wrinkle areas or nothing at all. For me those are forehead sides and upper part of the nose.) Shade 31 is perfect for me. It's neutral/slightly pink. Shade 32 is too yellow. I get the best results when applying it with wet beauty blender. UPDATE: I realised it IS noticeable, And my friends confirmed that. And pores look bigger than without it.

The Bourjois CC cream is a liquid cream that helps you to color correct any redness, dark circles and will brighten your face which means it helps you to even out your problematic skin conditions. I was so surprised when I first used it because usually you would think that a CC cream has not really a coverage, but trust me..THIS ONE has coverage!! I was shocked! (it can be positive or negative depending on what you are looking for) Well, I have to say that I applied it with a damped makeup sponge, as I always like to apply my base and it was amazing! I had a lot of breakouts + dark circles and it even it out without any problems plus it’s super blendable, and it will stay put all day long! Of course, I set it with translucent powder, but I had no issues with it! I’ll definitely going to finish this up and get another one! <object onclick="ga('send', {hitType: 'event',eventCategory: 'Ajax Interaction',eventAction: 'PlayVideo',eventLabel: ''});" width="360" height="320"><param name="movie" value="https://www.youtube.com/v/c4BSIA6GEMY"><param name="wmode" value="transparent"><embed src="https://www.youtube.com/v/c4BSIA6GEMY" type="application/x-shockwave-flash" wmode="transparent" width="360" height="320"></object>

This product has a little too much coverage for me, if I want to wear a cc cream, i want it to look simple and natural on me. This cc cream is more like a foundation. It looks beautiful on the skin but it's too much for me on a daily basis. If you're looking for a light-medium coverage foundation with a semi matte finish, go for it. If you want a sheer cc cream that just improves the look of your skin and makes it look a little more healthy and glowing, that's not the product for you.

Just bought it a couple days ago. And found it quite good on my skin. Light but improves my skin tone. The coverage is mild to medium as i wish. I don’t feel comfortable with heavy makeup for daily so this is my best choice i have.

Pros: Light weight n matching my skin tone Cons: Does not minimise any of my facial flaw! Inorder not to throw it away, you need to follow with a good concealer &amp; careful dusting with a finishing powder to get a passable finish look. An overstated n overpriced product! Will not repurchase it unless with a 20% discount! I might as well get myself a Wet n wild foundation with half the $$$.

This is the PERFECT mediator between Healthy Mix Serum gel- (runny, light,breathable texture) and the Healthy Mix Foundation- (medium coverage) It’s easy to apply, blend like a dream &amp; almost undetectable on the skin! Doesn’t cling to dry patches/sink into fine lines. Natural finish - not dewy or overly matth, And works well with any type of application I’ve tried. A+++ to that! My only gripe is the POOR SHADE RANGE Only Four to choose from, really?! Shade “light beige” have distinctive yellow undertone (on the range of NC 20-22) Shade “rose beige” have pinkish beige undertone (on the range of NW22-25) and basically nothing in between. I have a soft spot for Bourjois, great quality of products, but they need to step up their game &amp; consider multi skin tones/undertone. The formula is fabulous so I’ll repurchase.