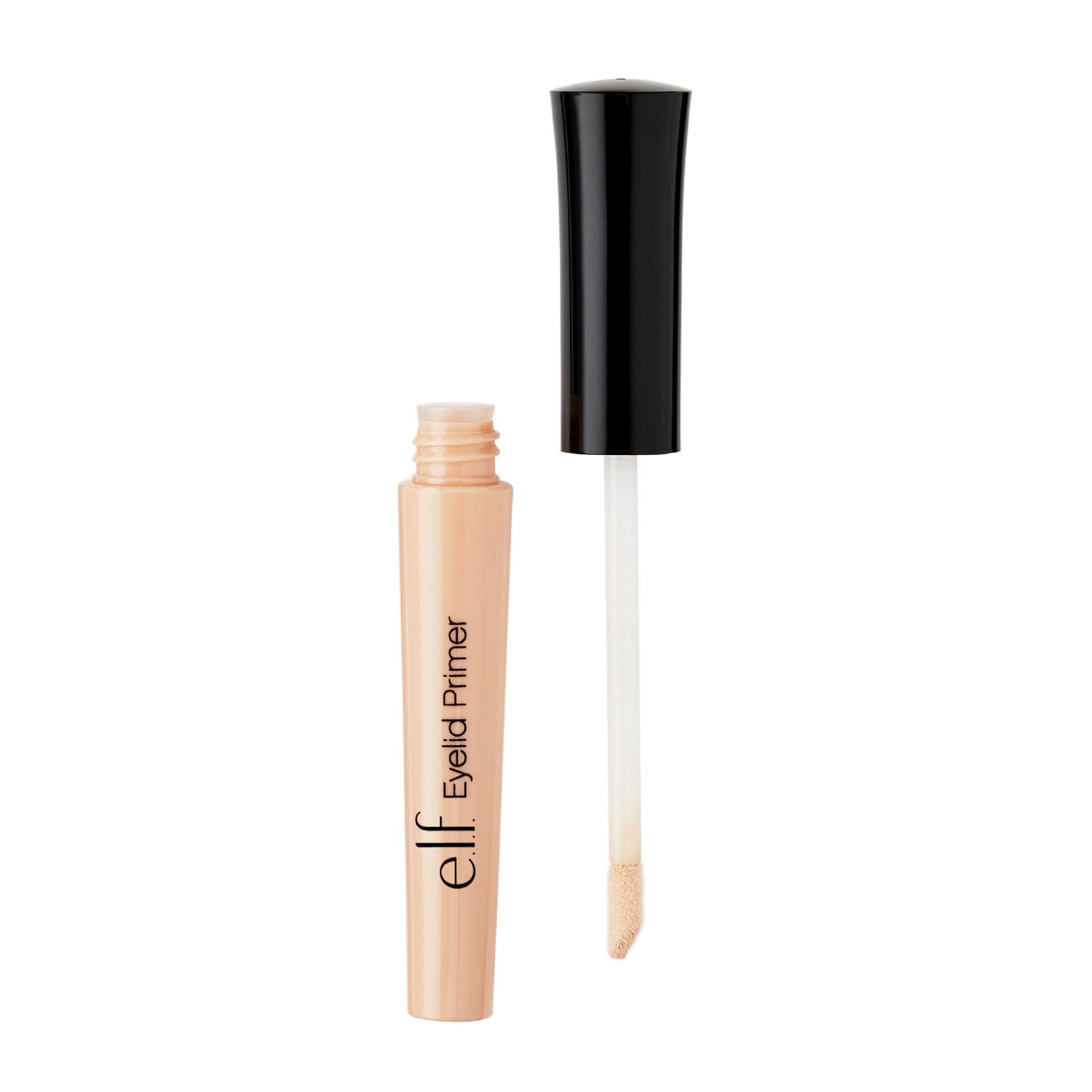 For years I wondered why my eyeshadow would rub off so quickly and chalked it up to crummy products. Later, I learned that I needed to use eyelid primer for eye makeup staying powder (setting spray too). We learn by our mistakes! Anyway, I learned this little nugget of wisdom not long after I discovered e.l.f. Cosmetics and I immediately bought their eyelid primer along with a significant number of other items, some of which continue to be staples in my makeup bag. This is the first and only eyelid primer I've used, so I can't compare it to any other ones. This one says &quot;sheer,&quot; but it's actually an opaque nude shade much like concealer or foundation. You only need a little bit of this stuff - I'll usually give my eyelid a swipe or two with the applicator and then spread it with my fingertip. It's a very light and smooth product and it dries quickly, but not so quickly that you don't have time to apply it properly. No fragrance or oily residue - it dries matte, but it's not drying. As someone who had never used primer before, WOW! What a difference in my makeup! Eyeshadow and eyeliner that wore off within an hour were still there after 5 hours! Obviously this stuff isn't magic and your makeup won't stay perfect for 10 or 12 hours, but it's still pretty darn good, especially for the price. I have no reason to use another primer - this stuff works and you can pick it up at any drugstore that carries e.l.f., and for the cost, it's an absolute steal.

This products WORKS! I notice a real difference in my eye shadow when wearing this, it stays on the lid longer and there's minimal creasing. I also like that it really brightens up the eyelid before applying eye shadow. For what I spent on this (2 bucks) this is a really really great product.

This is a great primer that works just as well as my higher end ones. I like the beige colour as it covers any redness on my lids. This dries to a nice smooth finish. My shadows apply with ease and they do not crease which is great because I have oily lids. Also they stay bright and do not fade. The price is great and I would repurchase for sure. Recommended.

Stuff is great. Affordable. Works like a charm never disappointed with this product. Have bought many tubes of this gem.

I think this holds eyeshadow better than concealer does, but this is not Urban Decay's Primer Potion. I went on accutane and my skin got dry. I stopped using eye primer. I thought I didn't need it anymore, but lately I noticed my shadow fading. When I was oily, UD was my HG and the only thing that kept my shadow on. I tried the elf and thought it lack luster in comparison. Now that my skin is more dry-normal, I like it better. It has a sheer beige tint that cancels discoloration and keeps my shadow from fading. I find it still settles in my crease with this. Not setting it works best. Pat your shadow on and blend afterwards. I'd buy it again. I think this works best for people who have drier lids. If you're oily, look elsewhere. I may buy a trial size of UD to see if it's worth it now that my skin has changed.

Maybe I would wear this on a no-makeup day so my lids can just have a finished look. For me, it was a little oily (though I have combination skin) and I had some transfer of eyeliner. Would not repurchase, though. My favorites are shadow insurance, Lorac eye primer, and Urban Decay primer potion - in order. If anyone would be interested.

This is a great budget eyeshadow primer. I believe they reformulated this and renamed it &quot;Shadow Lock Eyelid Primer&quot;, which is the one I have and it looks identical to the &quot;Essential Eyelid Primer&quot;. This doesn't offer any coverage but it provides a smooth base for shadow application and prevents any creasing for 12 hours. I have trouble with my liquid liner getting on my upper eyelid and when I use this primer it completely prevents smudging or transfer of my liquid liner.

I wish this worked better because I love the applicator and the price. But at the end of the day, this does not do anything you would expect an eye primer to do. My shadow was still faded and creased.

I bought this, based solely on price, without having read any reviews. It was absolutely awful. First off, it did not apply sheerly, which then caused my Smashbox eyeshadow to look different on my lid and it caused alot of drag when I was applying eyeshadow. It had a rough texture once applied. I usually give 2nd chances to my products, but this was an absolute fail:(.

SkinNormal, Medium, Not Sure

I've been using this eyeshadow primer for years now and it is incredible, never fails me, keeps my eyeshadow looking great for a long time. I have really oily lids and this primer prevents that from ruining my eyeshadow and eyeliner. It's $2 so very affordable, I was at first using it because I was barely getting into the world of eyeshadow, but I haven't let it go, it's incredible.