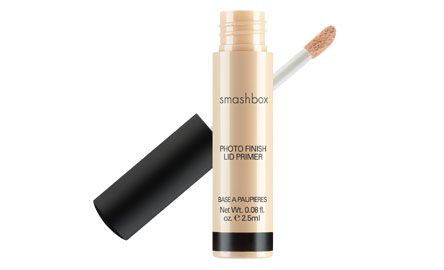 Yes! Finally a fantastic primer for OILY eyelids!! Eyeshadows stay put! Even the urban decay eyeliner doesn't seem to budge for several hours. Liquid eyeliner never moves on an oily gal. But, gels and pencils do. I haven't tried gel yet with this. But, the 24/7 pencil is actually staying on. 8-10 hours anyway...

Probably the worst primer I’ve ever tried for oily lids. I put makeup on before going to the movies and my eyeshadow had creased by the time I got back home. Horrible horrible!

Laura Mercier did not have my shade in stock, Smashbox boutique was on my way back... well guess I should not have. I also find it thick, maks lids feel and look heavy (even with light handed application), occasionally feels as though had burning little pricks here and there... I'll never let myself give in to desperation. :/

I think this is a very good shadow primer, particularly in terms of its coverage. I found this primer helpful in covering up the very visible veins on my lids. It also held the shadows in place all day without creasing or fading. My only complaints at the price ($21 for a tube) and the fact that it ran out so quickly. The tube I bought barely lasted me three months even with me scraping every last bit of product from the tube. I will not repurchase this primer despite my liking it because I will not spend $21 on a primer that I have to stretch to keep for three months.

Agree with most of the other reviews that this sadly is a fail. I decided to try this because this was one of the few eye primers I hadn't tried, and I need a primer if I want any kind of eye makeup to last more than 30 minutes. One past favorite of mine, Tarte 360, had been discontinued. Other primers that were relatively highly rated didn't work for me, so I thought I'd give this one a go despite less than stellar reviews. The Smashbox Lid Primer does in fact weirdly make your eyelids look wrinkly, even if they aren't wrinkly to begin with. (The effect is minimized if you pat the product onto your lids with your finger instead of using the wand.) But that hardly matters, because it isn't an effective primer anyway. It makes an absolute mess of stick or cream shadows, causing them to immediately clump up. In an eye-to-eye test with Nars Pro Prime eye primer using powder eye shadow, the eyelid prepped with the Nars had much better staying power. The eye makeup that had been prepped with Smashbox faded, migrated, and creased after a few hours. Returned to Sephora.

Too thick, makes the eyes look old and wrinkly, does not intensify eye shadow (even in an arm swatch), does not control oil, does not stop my eye shadow creasing. Basically it doesn't even work as an eye primer! To top it all off, it really irritated my eyelids and made them go red and puffy.

This product is way too thick and hard to apply and emphasized the wrinkles on my eyes. It has high coverage but a concealer would be a better choice if that's what you're looking for.

This eyelid primer leaves me on the fence... it's a lil thicker than my Mac paints but prob just as dry feeling. Just to be clear the product texture is dry, on application it does NOT dry out your eyelid. It comes in a lipgloss type container incl a doe-foot applicator attached to the cap. On application I just dab ( x1dab on) each eyelid w/ the doe-foot and found it best to spread the product w/ my fingertip. Overall spreads fairly evenly and covers the eyelid fairly well. I have no problem working my eyeshadows on it (wether it be powder cream or glitter type ) it seems to adhere very well. Where I do see an issue is the staying power... at the end of a day the colours seem to all meld together to the most dominant colour (cannot identify the crease colour, lid colour and sometimes the eyeliner incl). To be fair I've been using this during the spring summer months, not sure if it's slicks up with the heat of my skin and external temps? (I don't have oily eyelids or oily complexion), I will say the colour is there and strong but not how I intended it to be ... it just looks like I applied one colour across my eyelids? I will cont to use this product til it runs out maybe even save it for the cooler months and see if it has a better sustainability. At this point I am not interested in repurchasing- just doesn't seem to do what it's intended to do except keep 'one' colour intact all day... just my opinion.

This primer is surprisingly BAD. I got it as a Points Perk at Sephora (I really regret wasting 100 points). I rely on eyeshadow primers or good cream eyeshadows to hold my powder shadows all day and keep them fresh and vibrant. So I'm always up for trying a new one and because I've been travelling a fair bit with carry on luggage, I like having minis of things. I got this in the shade &quot;Light&quot; and was surprised that it looked quite dark when I took out the doe foot but applied, it looked absolutely fine in terms of colour. However, it started to ball/pill up when I smoothed it onto my lids...NOT a nice look at all, and it was hard to get the the pilled/peeled bits to smooth out or go away. Worse still, my shadows did not last with this...the shadow on my lids just disappeared and all that was left was some of my crease colour and a bit of my lid shade at the inner corners (where I hadn't applied this) - the primer seemed to &quot;eat&quot; my lid colours. As I said at the outset, I was surprised by how bad this is, particularly in light of how many really excellent shadow primers are available from so many companies (UD, Lorac, Nars and MAC are my faves).

This does prevent creasing and helps my shadow stay on longer, but it's difficult to work with. It's thicker and dryer than any other primer I've tried, so application is a little harder. I can accept that, though. But because it is also tackier on the lid, it is harder for me to work with the eyeshadows on it - they don't blend as easily or go on as smoothly as other primers. Further, I don't like the packaging - it doesn't seem hygienic to touch the doe-foot applicator to your eye and/or finger and then stick it back in the tube (I can accept this for lip gloss, but it bothers me more when it's the eyes, that might just be me), and you can't get all of the product out like you can with a squeezy tube. Combined with the price (there are better options, not just from mid-high end competitors but from drugstore brands like Milani), collectively this a fail for me.