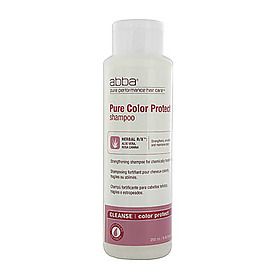 Overall this is a good shampoo and I would re-purchase only if I didn't find something I liked more. I've used ABBA hair products before and I've liked what I've tried. (shampoos and conditioners) The Pure Color Protect shampoo is a no frills SLS free shampoo that leaves my medium, colour treated hair feeling soft and clean without feeling dry or parched. There is no lather which I don't mind as it seems to be the trade off with SLS free shampoos. The price is reasonable and it does have a mild coconut fragrance which I don't mind. Overall, it's a good workhorse shampoo but I have my eye on the Orchid Oil shampoo and conditioner by Redavid so I'll probably purchase that once I'm finished this bottle.

I have highlighted and colored lowlights damaged fine frizzy hair. This cleansed my hair gently and smells delicious too. I used this on my roots and try not to rub my ends because they are damaged instead I coat my ends with conditioner while washing ans this has worked great for me while my hair recovers from the abuse I have given it. Glad I found this and will rotate this with organx sea minerals moisture shampoo. I I only shampoo every 4/5 days and clarify 1 every 6-8 wks and this routine is working well for my damaged hair. This shampoo did not weigh my fine hair down.

I absolutely loved this shampoo the first few times I used it as it made my blond hair soft and shiny like a child's. After the 3rd or 4th use my hair seemed to have no body (became very flat on top while ends were dry plus I had more breakage). I set the Abba shampoo aside, used a clarifying shampoo to remove the build-up and then switched to another brand for awhile. Just recently I tried the Abba again. My hair didn't look as nice as the first time I used it and my scalp was irritated for a 3 or 4 hours afterwards. Sigh!

EDIT: Unfortunately I have noticed that this shampoo causes a lot of build up on my scalp as my hair cannot go even a day without starting to feel really oily and weighed down. I have switched shampoos and like what I am using not a lot more. I have loved Abba Colour Protect Shampoo for a few years now on and off. I initially bought it because I had dyed my hair bright red and my colourist suggested that I find a shampoo and conditioner that were sulfate free to help keep the colour longer. This shampoo has helped keep my hair in such amazing condition. The first time I used it I remember being so surprised and excited because for the first time after shampooing, my hair didn't feel dry at all, it actually felt more moisturized. It lathers very well given that it doesn't have sulfates it in but gives your hair a nice, gentle clean. From what I have noticed, it doesn't cause any build up in my hair but maybe I'm not the best to comment since I do use a clarifying shampoo once a week. The only thing I'm not crazy about with this shampoo is the smell of it. It has a bit of an unusual scent and its not bad, just very unusual and I'm not the biggest fan of it. This is hands down the best shampoo in the whole wide world and nothing really beats it. I don't even colour my hair anymore but I still use this because it makes my hair feel so incredible. Would recommend.

I have dry, fair skin and color my thick hair red/brown with blonde highlights. I use this shampoo with the corresponding Abba Color Protectant Conditioner every other day. I love everything about it. It smells lovely, lathers plenty, its vegan - yay!, and leaves my hair smooth and soft and of course - the whole point of this line - leaves my color in tact. I buy the big bottles from Ulta for $30, or $15 if I score it on sale. It's a great deal because the big bottles last 6 months or more for me.

I used this after I put a brown henna in my hair. It kept my color for a long time. Long time meaning, a little over 3 months.

Very gentle. Smells nice (almond cherry). My hair is dry, frizzy, and lifeless and this shampoo is gentle enough for regular use. Also it's vegan and sulfate free, yet lathers just fine.

I purchased this shampoo from my local Walgreen's, for $11.99 on September 25, 2011 (today is February 17th). It's a small bottle so apparently, I haven't used very much. I'm not a daily shampooer. However, it wasn't until I had been reviewing my diary (history of purchases) that I realized just how long the stuff's been sitting in my shower. The shampoo feels and smells nice. I like that it's "vegan" as stated right on the bottle. Anything animal-friendly is a-okay in my book. I don't recall the last time I had my hair colored (I just re-colored today) but the color has lasted a very long time. As far as protecting color, this shampoo works very well. Before today, I wouldn't have said that this shampoo really "lathered" up, which gives the feeling of really cleaning your hair. But, it's what I used to shampoo after coloring my hair and it did a very nice job at getting the color out. I used more than normal because of all of the color product in my hair and it really did lather up big and fluffy. It seems on the mild side for shampoo so could be used daily I expect -- if you are so inclined to wash daily. As far as condition of my hair? I'd say it's average. But, I've been through some traumatic health issues (that are known to damage hair and skin) over the last 2 months so average for me is good right now. Overall, it's a 4 for all of the above reasons.

I have tried this many times, with many different follow-on conditioners and it made me realize that I need to go buy Terax shampoo by the liter. It did cleanse, and lather decently (but I could care less about lather and more about results). It left my scalp cleansed but not stripped.......but left my actual hair too dry, with not nearly enough slip.....which is odd since I only apply shampoo to my roots and then just let the suds rinse through the length. It just felt....odd. Like maybe the pH was not right for my hair or something just wasn't rinsing out completely. I'll try it again with warmer weather, and see if I can use it up. I got this with a good discount from Ulta, so it was much less than the usual $20 price for me...had it been full price I would have taken it right back to the store. It isn't too awful, but it certainly isn't what I expect from a $20 shampoo. I have tried it again, and downgraded the rating. It leaves the length of my hair a nasty ratty mess, leaving something coating and tangling on the hair shaft until I clarify. L'oreal Evercreme Nourishing shampoo and terax are now my go-to shampoos for daily sulfate-free cleaning

Heard miracle of ABBA haircare. My scalp is all flaky and dried up. and there is no changes with this schampoo. my ends seems drier than ever. (this isnt a moisturizing schampoo) But there should be some improevement. Or maybe it was just not for me!