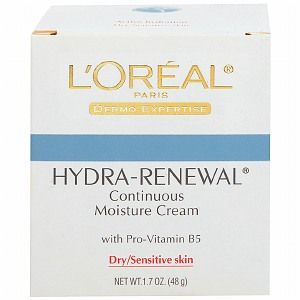 I started using this when I began AHA 10% in place of retin a because it was too strong for my hormonally dry challenged skin. I love this stuff. I would prefer it in a pump than an open jar. I am now using it day and night and my skin is uber baby soft, quite unusual for me! I love it for its simplicity and results. I also use twice a day, in the morning over my peptide serum and at night with AHA.

I'm extremely picky about face moisturizers. I've tried Shiseido the skincare day moisture protection and that expensive moisturizer doesn't compare to hydra-renewal. I use this religiously in the winter months because I live in the north-east and you ladies and gents know how nasty the weather can get. My trick to wearing this moisturizer is to put it on right after I cleanse my face, while it's still wet. You'll see white streaks especially if you're medium to dark skin tone but don't get discouraged. Work it in well and let it air dry. I wouldn't recommend this for the summer as it tends to get oily in the heat. F.Y.I - I have very sensitive skin and haven't seen a pimple once.

Skin Type: Dry and sensitive I've used this product for the past 5 yrs. This works great in cold months. Never had a break out or skin reaction. The company does need to work on the packaging (needs to be more earth friendly). The container is a bit on the heavy side.

I do like this moisturizer, but there are a few hangups for me. The ingredients are great! Water's the first ingredient - as it should be, Glycerin - great second ingredient and great humectant, Shea butter - very moisturizing and rich, Sal butter - great anti-aging properties and good for eczema. Texture's smooth and light, not very greasy. It doesn't seem to sink in very well so I use almost double a normal amount of product. Works decently under makeup, as long as I'm not flaky... but nothing helps that. Using it after a treatment or a night cream isn't very effective but it's not bad for a day moisturizer. The smell is strong but I'm not having any allergic reactions to it. Overall: it's okay for a day cream, not remarkable or an HG for my sensitive combination skin. My final decision is to let me fiancee use it as an after-shave lotion.

I like that this moisturizes my dry winter skin really well, but it does not wear well under makeup. After an hour or two, my face becomes very shiny & oily. After a week of using this, I've had a slight breakout (very small pimples on my chin and cheeks). I'm not sure if it is due to this or a new foundation I started using at the same time. Regardless, the search for my HG winter moisturizer continues...

My HG for moisturizer. I try other things from time to time, something with sunscreen, something with anti-aging properties, but I always come back to this. I have really dry skin, that is sensitive to some products. This goes on great under makeup. It looks like a cream in the jar, but it goes on really light. It keeps my skin hydrated all day. No irritation whatsoever.

I bought this after going through the Chicago airport and having the Security take my Dr. Hauschka away because it wasn´t in a clear sac. I really didn´t expect much, because in the past there have been only a few Lóreal moisturizers that have been okay for me. A lot of them always seem to be too harsh. I must admit that I have become a total fan. I used it on my skin in cold weather in Utah and it did the job. After applying it soothes my skin and when I wear it underneath my makeup I never get that tired and dry skin feeling that I often get with others. My skin feels soft and moist, what do I want more? It´s surprisingly lightweight, but it really sinks into the skin after application. I haven´t had any adverse reactions to it all, to the contrary: I think my skin has even cleared up more since I started using it. With the ridiculously low price, I stock up on it when I´m in the States because sadly, Lóreal doesn´t sell this one here in Europe :(

Pretty much whack. I have super extra painfully dry skin. Anyway I reached 25 and after a few too many years of rock-star style partying i noticed some wrinkles in my forehead. So the search for a perfect anti aging moisturiser began. Anyway I picked up this product mostly cuz it was cheaper than others. first of all the 'cream' is super thin, like a watered down lotion. Its HEAVILY perfumed. The moisture was better than i thought it would be based on the consistency, but i wouldn't call it continuous. Mostly i disliked the harshness of it. it burned my skin for about 30 seconds upon application. no good. i would hesitate to but anything form l'oreal skincare again.

Before this, I was using the Dove facial lotion for sensitive skin. I liked it because it was light, thin, and non-fragrance. I would have to put it on after I shower and after I wake up. I wanted something that would put moisure IN my face so I wouldn't have to apply it so much though. The Dove one only moisturized my face while the lotion was still on. <br></br> I read most of the reviews about different facial lotions but didn't find anything to my liking or affordable. So, I went to Walmart and browsed all of their facial lotion and found this. L'oreal is supposed to be a good (drugstore) brand, and the "continuous" part was what I needed so I bought it. Honestly, I expected myself not to like it because I thought it would irritate my skin and make me break out in rashes since my skin is so sensitive but to my surprise, it didn't. I've used it for a week or maybe a little longer, and it's been working really well. The only time I have to put it on is after I shower unless my skin is really moody and gets extra dry out of nowhere. I don't mind the tub either because I think it's kinda cute. However, I can't stand the smell (hence the 4 lippies). I think it goes away after a little while? I wouldn't really know because I can't smell my face, but I can smell my fingers after I put it on =/. It still does its job though so I'm content. I'd buy again.

I would definitely not buy this again. I was looking forward to trying it out because shea butter is the third ingredient and because of the great reviews on here about this product. The #1 reason why I would not buy again is the fact it really irritated my skin making it feel hot, itchy and dry. On top of that my forhead was breaking out within hours after applying this stuff with this huge red puss filled pimple and this one cystic one that was almost gone (thanks to Noxzema) got even bigger than it was originally. For a "cream" that's really more like a lotion was very light but felt heavy on my face. Plus I didn't feel it was very moisturizing. It's too bad because it said it was for "dry/sensitive skin". The only good thing I found was it smoothed my skin out before putting on foundation and it looked so wonderful. I'm real hesitant about forking out anymore money for drug store moisturizers now after having tried Olay and Neutrogena products for "sensitive" skin. Good thing I still have plenty of L'Occitane Ultra Moisturizing Day and Night Care creams (with shea butter) which says they're for dry/sensitive skin. I'm going to try The Body Shop's various moisturizers for my skin type such as the Hemp Face Protector and Soy & Calendula day and night creams. Hope they work out for me...