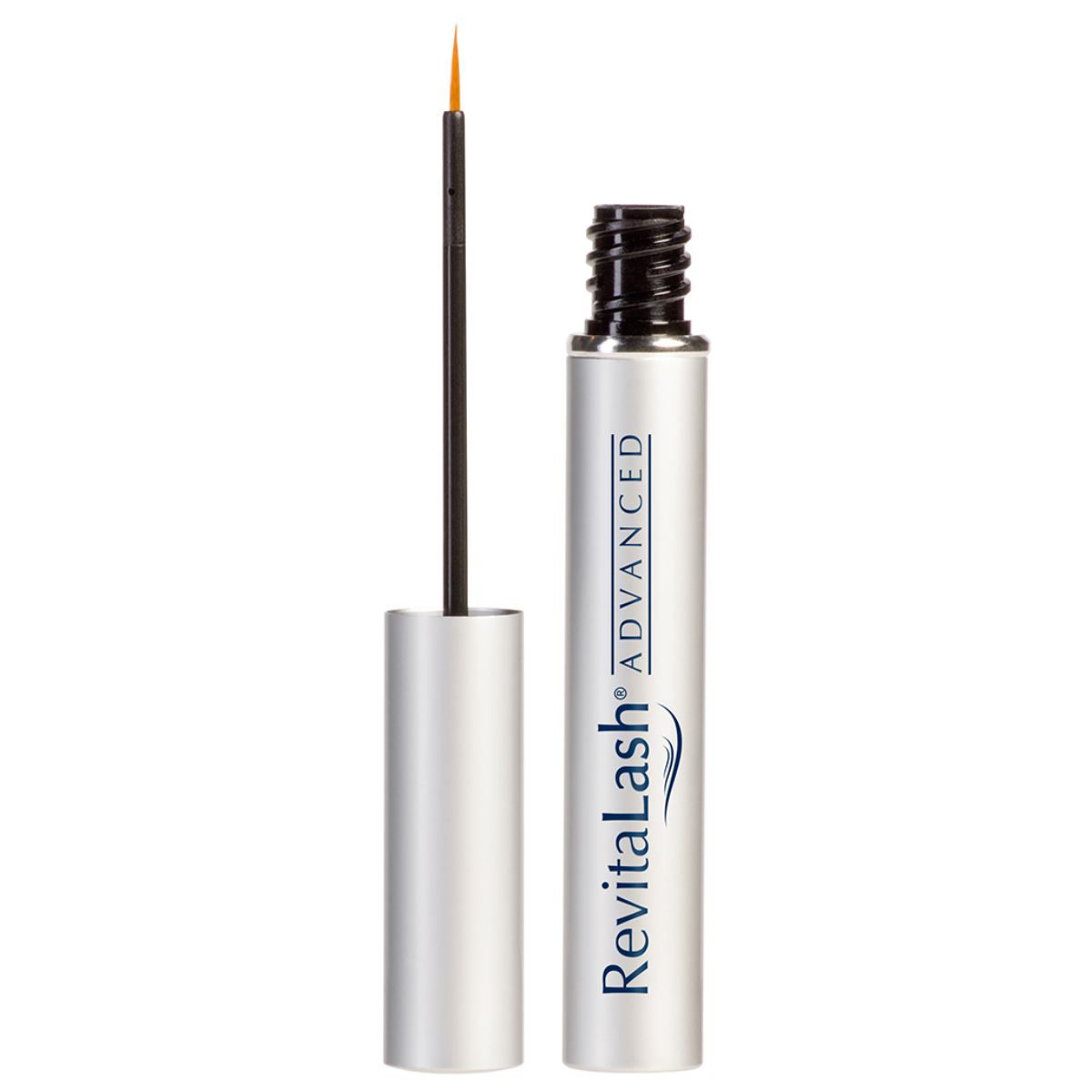 I tried Revitalash last month after reading lots of good reviews and a few personal recommendations. What can I say...I'm impressed! Within a few weeks I noticed a slight increase in length, also my lashes appeared darker and fuller/healthier. I didn't notice any stinging unless incorrectly applying too close to the roots, or if I rubbed my eyes before the serum had a chance to dry properly. I also liked the formulation which was a lot lighter in consistency than what I'm used to. Although I've now used it up and purchased just as a stand in for my regular HG lash serum (and admittedly to see what all the fuss was about!) if I had to pick one for next time, I would most likely stick to the one I've been using before, due its much lower price point and totally organic ingredients, otherwise there was very little difference in terms of results achieved. Selena x ~ My HG list ~ (As I've sampled 100s of skin, hair and m/u products over the last decade and a half, I thought it might be useful to share my top 10 must-have products, subject to change if and when I come across something more effective. I love constantly trying out new stuff - usually sample sizes via e-bay, also plenty courtesy of a friend who works at Sephora) 1. Hair Loss Treatment: ‘Divine Herbal’ - Hair Oil 2. Lip Balm: 'Nuxe' - Reve De Miel Lip Balm 3. Pigmentation + Anti-Ageing Treatment: ‘Divine Herbal’ - Facial Treatment Serum 4. Cleanser: 'Paula's Choice' - Skin Balancing Cleanser 5. Concealer: ‘Mac’ - Studio Finish Concealer 6. Lash Growth Serum: ‘Divine Herbal’ - Divinelash 7. Foundation/SPF: ‘Juice Beauty’ - Stem Cellular Repair (warm glow) 8. Face Scrub: ‘Sisley' - Botanical Gentle Buffing Cream 9. Moisturizer: ‘Lush' - Enzymion 10. Hand Cream: 'Origins' - Make A Difference Rejuvenating Hand Treatment

I've been using this for years. I have been wearing fake lashes daily for a decade, needless to say I barely had any real lashes left. so I've decided to give this serum a try, and my lashes grew Back and much longer too! pros: really works if you use it daily. adds a LOT of length cons: very expensive. doesnt add volume (only gives you length) I will continue to use this unless there is proof that something better is out there

After 40+ years of sparse eyebrows (my mother plucked them back when it was the fashion; never grew back), she tried Revitalash on her brows on a whim. I can't speak to lash growth, but her brows ACTUALLY GREW BACK. After 40 years. (no, she never used Latisse.) Not super thick, but she had...brows. Like actual brow hairs and a fully shaped brow, rather than like super sparse to nonexistent hairs on the tail. No more eyebrow pencils/powders/etc! ...then she used a microcurrent device and like half of her new growth fell out. Warning to the wise. TOP TIP: Costco sells revitalash lash serum for $49 each online. They still work. At least, that was what my mother used and, yeah, it worked like crazy. Lisa Eldridge recommended it too for brows so, can't go wrong (NB: Lisa uses the same at-home microcurrent device as my mom, so I'm stumped. Maybe she's not using it on the forehead area?) - I'm off to buy some. TOP TIP 2: if you're using it for brows, get the lash one - it comes with a brush, more precision, less wastage than the stupid spoolie on the brow version.\ DISCLAIMER: this review is for brow growth but it's the same principle. However, if you're intending to use it for lashes, I'd definitely read up on the risks of irritation, and patch test. One advantage over Latisse - afaik it hasn't shown the upper lid sulcus (hollowing of upper lid) issue which has occurred in some Latisse/Lumigan lash growth users.

Latisse worked really well for me until I began to rebel at the price. Revitalash actually works just about as well. It was still very close to $100, but I like the way it applies and after several months of use, my lashes have definitely gotten longer and fuller. It's worth every cent!

So, this does actually work. In combination with a lash lift/perm or a lash curler and mascara, my lashes now look quite impressive. Unlike some reviewers, no one suspects me of having lash extensions or falsies. Without mascara, the results are barely visible. With mascara and a curl or lift, my lashes are noticeably longer, but like naturally long lashes, not the obvious look of extensions. Even with more layers of mascara, they don't look like extensions, just long lashes with a lot of mascara. I prefer a natural look, so the naturally long look is fine with me, though I would be happy to trade in some of the length with a bit more fullness. It took me two months to see significant results, which also seem to be the final result. I'm in the end of my third month and they haven't grown from the second month. I am still on my first bottle, though it's running low. Will repurchase to maintain results. I am however taking some lippies off the price and overall rating, because I do find it to be too expensive, when it is not delivering on fullness - and when the results are not really visible without mascara. UPDATE: After the third month I thought I was seeing the final result. However, I am now four months in, and have seen additional length. People are still not asking me if am wearing falsies, but two people have asked me what mascara I'm wearing, which hasn't happened before. I would still trade in some of the length for more lashes or thicker lashes, though.

So this is great stuff, but I will tell you within a week of use I almost gave up on it. The first week I looked terrible! My eyelids were a gross pinkish red color right where I was applying the serum.. I was determined to make this work. Instead of following the vague directions where they basically imply that you use it as if you were applying liquid eyeliner, i decided to try a different technique.. and it solved the issue! I apply the serum as close to the root of the lashes as possible, being very careful to keep contact with my eyelid skin to a minimum. I no longer have the discoloration and now after 6 weeks of nightly use my eyelashes look great! I will definitely repurchase

Great product that does what it claims. In a couple of weeks you can see your lashes getting darker and longer. The only downside is that the area around eye lashes gets dark too.

Revitalash was created by a doctor after his wife lost her eyelashes following cancer treatment, she found her lashes regrew quite quickly with use of the product. So having read this, several years ago I thought I’d try it on my sparse, short lashes. I was sceptical, but found with nightly use, after about three months my eyelashes grew quite long, in fact people commented, asking if I had extensions. I’ve now been using Revitalash for about six years and over the last year, feel results have lessened. I’m considering trying another well known, clinical brand. It should be noted, Revitalash needs continued use. After lash length has been achieved, the product should be used up to three times per week, or after the lash’s natural lifespan, it will fall out and the new one replacing it, will grow to its normal length. Also with these lash conditioners, including this one, darkening of the eyes and eyelids can occur. I have noticed the skin directly above the top lash line has darkened.

This works BUT be warned if you have dry or sensitive eyes. I have sparse and (used to be medium) now medium to long eyelashes all because of RevitaLash, and I have been using this for about 4 years now. Pros: - It really works. - Only needs to be applied once a day (I do it at night, just make sure not to have any cream products on your lash line, or wait until everything is absorbed). - When I got lazy a few times over the past few years, there was definitely a noticeable difference. One time for a few weeks, I applied on one side and didn't re-dip to apply on the other, and the latter side was definitely shorter and more sparse. Cons: - It stings if you apply too much (it also stings if you cry any time after application). - It makes my eyelids reddish from the irritation. - It keeps on giving me styes on one eye (I also wear contact lenses, so I don't know if that attributes to the styes). - Doesn't volumize (I used to use Talika Lipocils on the ends in conjunction with this and they work synergistically but I got lazy). Overall, it's an effective product that I'm addicted to using, but you have to be EXTREMELY CAREFUL.

I used Latisse for over a year and my lashes were longer but the lashes were so fine and fragile they would consistently fall out. I tried RevitaLash and am on my 2nd tube. My lashes are longer, thicker and stronger. I don’t wear mascara anymore. I curl my lashes and tightline and my lashes look like incredible. Less expensive than Latisse, and no prescription hassle. Will repurchase