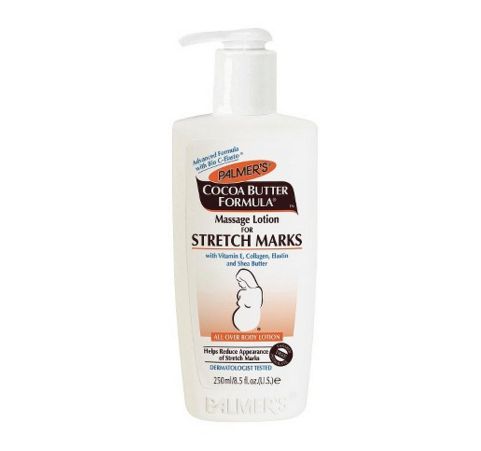 Very moisturizing, helps keep itchy pregnancy skin in check, smooths over the skin well... I didn’t like how thick it felt and sticky on my skin hours after application... in dry winter weather. That reason alone was enough for me to pass on this lotion. I didn’t find it helps with stretch marks, but then again, I would have had to use this over quite a long period for it to have true effects.

This is very thick, moisturizing and emollient, but it makes me break out on my arms and legs if I dare use it there. I'm talking pimples/whiteheads on MY ARMS. I had a WTH moment with this one; I didnt know I could break out there. Now I use this exclusively on my hands and feet. Its fragranced but I enjoy the smell, even though I would prefer if they toned it down a couple notches. Wont repurchase, as I'll get a fragrance free lotion/cream with ceramides from the drugstore instead, for the same use. My current trusty body cream is Vanicream in the tub with the pump. I slather that on while I'm still damp from the shower. That has given me no problems. I also use Vanicream Light on my face every night on top of Paula's Choice bha and Benzoyl peroxide 2.5%. It has never stung my face or anything which is why I always have it on hand.

I lost weight pretty drastically and i have stretch marks on my arms, thighs, butt and decolletage area. I doubt there's a miracle cream out there that reduces the appearance of stretch marks, and this cream certainly isn't one of them as well. However, the cocoa butter scent is absolutely divine and the formula is very moisturising. I would buy another tube again for those reasons.

Before i get into the specs of this product, i want to start off by saying that i have EXTREME stretch marks all over my mid section and i also have them all over my back and some on my upper arms. I am a deeper complexion so they don't show up red or really harsh but up close it is really noticeable, and i am very insecure about them and i don't wear short sleeve shirts/tank tops because of them. Well anyways, it's starting to become summer time and begging to gett really hot, so i decided to look up on youtube how to get rid of stretchmarks, and i came across this video of this girl reviewing it and basically calling it a miracle product with before and after pictures. And after that, i began to look it up on google and found many great reviews on it. So i went to my local walgreen's and picked this product up, it was 7-8$ but it's probobaly cheaper at Walmart. Anyways, i began using this product RELIGIOUSLY before i went to sleep and after i took a shower, so twice a day. and i would like to say that about 3-4 days in i woke up one morning and i had a rash ALL OVER MY BODY!! every place that i applied the lotion, i had red tiny bumps all over, and they itched like hell. I honestly couldn't help myself, so i went immediately into the shower and try to scrub it off me! And to make sure that ir was the cream that gave me that crazy outbreak i stopped using it for a couple days, and the redness and bumps went away completely. I honestly, and truly wish that this product would have worked for me, because i currently use the Palmer's Moisturizing body oil and let me tell you, that is an INVESTMENT. But i would give it another spin but i don't know if i can endure that pain again.

I've never been pregnant, but I did have many stretchmarks on my stomach and hips due to rapid weight gain. At first I bought Bio-Oil and that didn't work. So then I bought this. During the first 4 months I didn't notice any changes, but after the 5th month I noticed my stretchmarks slowly disappearing. That was back in 2012. My stretchmarks are nearly gone now. I still use it everyday because it keeps me moisturized and it smells really good.

I bought this on sale because I had been wanting to try it for ages. This review is for the tube version cream concentrated, NOT the pump one. So far, nothing. It doesn't seem to do anything and I have serious stretch marks from pregnancy and losing weight (140 pounds). My big gripe with this is the smell. It does NOT smell like cocoa butter at all. I don't know what is different about this but it stinks. No idea what is going on because it smells nothing like their other products. It's strong and smells like oil? I dunno, but its similar in scent to vegetable oil. I cannot stand the smell. I literally gag. Giving it 3 lippies because it does moisturize but I have not seen any difference in any of the stretch marks. Not even a slight fading.

This lotion is just okay. If you like the smell of cocoa butter in this formula (think melted waxychocolate), &amp; a thin texture that absorbs quickly, it can't hurt to try at this price. I'd encourage people to explore other Palmers products, though, &amp; not get hung up on promises about stretch marks in any line you come across.