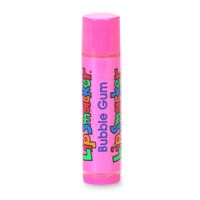 I bought the Liquid Lip Smackers and 2 of the Lip Pals - Unicorn Magic and Cuddly Cream Puff. Lets start out by the packaging. For the Lippy Pals - My gosh, THEY WERE SO ADORABLE ! They were in unicorn and panda shape, and the smell of the unicorn one was soooo good. Sorta smelled like Strawberry Candies. The Cuddly Cream Puff has a normal vanilla flavor any lip smacker could have. The Liquid Lip smackers where ALL RIGHT. I got, strawberry, watermelon, spun sugar, cotton candy and tropical punch. They left your lips feeling greasy and oily, unlike the lip pals, which actually moisturized your lips. Overall, the lip pals are better then the liquid smackers any day !

I used to like Lip Smackers when Bonne Bell owned the company before Markwins took over and bought it. Back then, Lip Smacker and Bonne Bell catered to us collectors (we buy thousands of lip balms a year. I used to buy like twenty thousand lip balms). They would create new flavors just for us collectors, and they didn't need Disney products to carry the brand like nowadays. In 2015, Markwins bought Lip Smackers and Bonne Bell. I was so worried about if the quality would be good like with Bonne Bell, and I was right that the quality would turn bad. Markwins keeps putting out the same flavors in different packaging for all the seasonal years. They started to make LS and BB products in China when they've been made in the USA since the beginning. Us collectors complain all the time to Markwins, but I don't understand why they don't cater to us. I don't understand why they can't create new flavors for us collectors to buy. Lazy, lazy, lazy! I wish Markwins were more grateful for the dedicated fans they acquired when they bought LS from the Bells. Seriously, the world doesn’t revolve around Disney branding. I mean, come on, we spend our entire salary every year buying over thousands of LS products unlike the other lowly customers who only purchase LS products like, maybe once a year.Markwins sticks to about 8-10 flavors and renames them 20x’s. *Eye rolls* With all the money they’re making from the Tsum Tsums WHY aren’t they spending it on R&amp;D for new and AUTHENTIC flavors!?! I like, wrote in on Facebook about my thoughts and someone had the nerve to say to my post that Markwins won't cater to us because we're not the general public. We're a niche brand and a small niche. The person had the nerve to say that since Markwins is a big company, they have no time to target small niches like us. The person also said we're in the 1% and no company is interested in us because we're that low. I'm like, excuse me????!!! Us collectors are so not niches at all. We helped build up the company to how great and powerful it is for today. If it weren't for us collectors, this company wouldn't have lasted as long as it did. Now, Markwins is ruining everything that Bonne Bell stood for. Also, that person said since another company took out, the management would manage BB and LS differently than Bonne Bell did because of the switch of companies. Even if we’re the 1%, we spend 10X as much as the regular consumer, who doesn’t buy every new Party Pack coming out, or collection-most of us do! So our opinion does matter. How hard is it to do a few brand new flavors a year and some really good originals collections? I literally avoid any Disney branded Smacker now. I will buy any but that just to spite it. Emily Huang is now head of all Bonne Bell/Lip Smackers brands at Markwins. Clearly, she’s sleeping at the wheel because they haven’t done anything with the BB brand and clearly nothing new with Lip Smacker. Bill George is her boss. Both need to leave cosmetics immediately That is so, so wrong! They should manage LS and BB the same because we're the companies bread and butter. UGH! I'm so over Markwins. Anyone with me?

I did like these because some smell good and gloss the lips but today I noticed this is what is drying my lips out ..after using it all day my lips became flaky and now I know it's not the eos it's the lip smackers. They are too expensive anyway.

As an adolescent, I collected these, mostly through Christmas gifts and Easter baskets. I had a few dozen. I matched the label color to my outfit some days. My mother strictly forbade makeup, but these somehow passed her scrutiny. I was still using the shimmery space themed ones into my 20s, at least occasionally. The bubble gum one looked good with magenta hair. But now I can honestly say that they're not reliable enough to use as lip balm, even by the lower standards I hold tinted balm to. The formula and texture seem to vary significantly between different flavors, with some flavors actually being really drying, even without shimmer. There's also a mystery ingredient that makes the upper layer of my lips defoliate excessively. For a while, I was able to use the vanilla one as lip balm with reliable results, but then it seemed to disappear from stores. Instead of paying to order more online, I sought out and found better lip balms. I still occasionally try new flavors (this week, I bought a set of three Biggy Smackers because I thought one of them was vanilla...it wasn't), but I'd only use them as balm if several other options disappeared first (Aquaphor, Cherry Culture's lip balms, Burt's Bees Honey [that flavor only], any lip balm Blue Q makes, and others). To be 12 again! I'd gladly give up the Givenchy and MAC glosses and complicated skincare routine...

I like these ive overlooked them before because I always thought they were for kids but these aren't just a balm they are a gloss and a good one at that. They make the lips appear fuller and others have noticed this as well and lately I have ditched my lipsticks for these. I don't like some flavors such as dr pepper and ice cream sandwich and cotton candy is pretty gross but the strawberry and bubble gum are the best although ive noticed with strawberry and watermelon the texture of those melts easily and Its different textured than some of the others so I wont repurchase any fruity ones but i want to stock up on bubble gum and the chocolate mint.

Lip Smackers are my favorite lip balm so far. I tried Labello and Nivea lip balms, but after using them for a couple of weeks my lips just turned dry. I guess those brands use a lot of paraffine in their balm. The more I used them the drier my lips became. LS have never turned my lips dry. They even helped with the dryness caused by the other lip balms. It's a ridiculous thing to say, but Lip Smackers might just be my holy grail of lip balms. I always get the 8-pack consisting of mostly fruity flavors plus a vanilla and cotton candy balm. They're pretty expensive and hard to get here in Europe... but I will always find a way to get them... gosh, I must have used about 20 of these lip balms in the past four years or so... I have one in my car, one at my boyfriends place and a ton of them at home.

I've been a fan of these balms since childhood, so it's hard to rate them poorly (obviously I keep buying them!) However, I've either become so picky from having a huge lip care collection or they just aren't as good anymore. They still moisturize my lips just fine, but the scents on some of the novelty type collections are hit or miss. I've now learned to stick with original flavors or fruity ones, the cake ones or anything chocolate all smells too fake to me. I guess the price is okay, but since I find sets on clearance all the time I stick with those. I still like the packaging and I think these are a good way to get me to use lip balm more often. I make sure there is a tube around me at all times and the nice scents are a great incentive. Even the scents that are a little off get used, but my favorite scents are always saved for my nightstand. I apply one every night before sleep and I never have chapped lips anymore. For the record, I have at least 20+ other balms that all do the same thing- but these are the ones I gravitate towards. The variety in scents/flavors is worth a few duds.

This is my all-time favorite brand of flavored lip gloss! I started using them as a little girl, when the cosmic line was still around. I remember feeling cool while using the Berry Heavenly flavor, and applying a lot of the Dr. Pepper flavor because it gives your lips some tint, and I still miss the scent of the Blueberries n Cream flavor that came in a clear tube with a keychain. I started collecting Lip Smackers when I was 13 years old. I've always had a thing for any sort of cosmetics you apply on your lips (even lipstick), and I felt great having them in so many fun flavors. For years and years, I've gone on many Lip Smacker hunts trying to find the latest collection or a flavor I had a hard time finding, or get multiples of flavors I really like. I even organize them by collection and how many I have! It's kind of a silly hobby, but it's not a very expensive one. There's bound to be a few sold at discount and dollar stores, which I recommend buying at those places if you've never tried this brand before. When it comes to moisturization, most Lip Smackers do pretty well. The most drying ones I've used are the squeezy ones, and the most moisturizing seem to be the original flavors. The packaging of these can be a hit or miss, depending on if you prefer a certain kind (I know not everyone wants Disney characters on their lip balms), but most of them are pretty cute. Also, this brand is now owned by Markwins Beauty, so the flavors and collections may change. I know there's some flavors whose formulas aren't as good as they used to be, so please be aware that they may not smell exactly like you remembered them. I'm still disappointed that Dr. Pepper doesn't smell good anymore.

Bonne Bell sold the company earlier this year and they changed the formula to the Dr. Pepper Lipsmacker and it also burned my lips and it feels like oil.

All of the lip smackers are cute and smell good but they are wayyyy too waxy and too much product comes off when you use it.