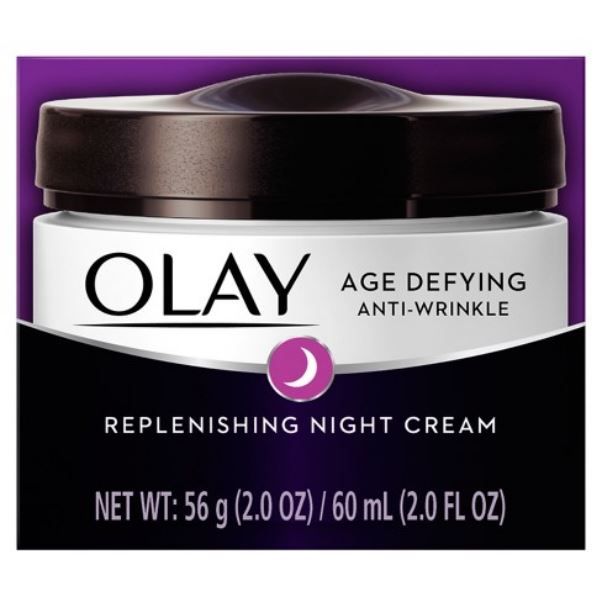 This works so good for being so inexpensive. I truly love almost all of the Olay creams I have tried and I'm used to buying high end creams and prefer Olay. This night cream makes your skin look really youthful and glowing. It also helps balance your skin. I never feel oily when I use it and I have extremely oily skin.

I swear by this stuff. This is my favorite moisturizer I’ve ever used. It’s a fluffy white cream, that feels so great when you apply. When I wake up in the morning, my skin feels so hydrated and smooth and soft, it’s incredible. After applying, my skin also feels so hydrated and soft. The scent is floral-ish, which I actually don’t mind. My super sensitive skin LOVES this stuff! I will always repurchase! EDIT- I had an allergic reaction to this, I’d assume to the fragrance. I do love the texture and moisturizing properties, but I’m afraid to use again!

This is the only product I swear by and is a staple to my skincare routine. I have oily skin that is prone to acne, and before using this product my skin was also very textured, red around the nose, and dry. This product makes my skin feel smooth, soft, and replenished - as if it is helping to lock in moisture and keep your skin plump. Also, my skin has evened out in texture, is not as red, and I no longer have a joint oily/dry problem. The smell is not so strong in my opinion, and it is pleasant and natural-smelling at least to me. The texture of the cream is very light and silky. Overall, a great product that I think everyone should try out at least once to see if it works for them. I am on my 4th bottle of cream and I don't plan on stopping. I only wish it were a bit cheaper.

I really, really, really can't stress how much I love this product. I bought it for the first time a few years ago because it was on sale and I love a good sale, and it wasn't until I got home and opened it that I actually realized it was an anti-wrinkle cream. When I opened it I also realized that it smelt... strongly, to say the least, but I decided to try it anyways, because nothing stresses me out more than returning products, and I'll go to pretty much any length to avoid doing that. When I first put this on, I really was worried that it would irritate my skin because it really does smell strongly, and I know I've already said that, but it's worth mentioning again. If you have any sensitivities towards artificial smells, you'll probably want to avoid this product. That being said, I was incredibly surprised to find that this didn't irritate my skin at all, and it actually made my face feel incredibly smooth (which makes sense in hindsight, because of the whole anti-wrinkle thing). I'm not prone to acne, but my skin is ridiculously oily and ridiculously red, and this product didn't worsen either of those problems. It didn't make my skin red and, in the mornings, my skin doesn't look oily at all. I've already repurchased this product a few times (though most recently I accidentally bought the version of this that's 'age defying' but not 'anti wrinkle, so that's what I'm currently using), and I'll likely continue to do so. I think it's reasonably priced (especially on sale), and it does what it says it will. It's definitely the best accidental purchase I've ever made, and I can't really recommend it enough!

I was a devoted Olay day cream user for like twenty years but had never tried the night cream. It’s fine, but I can’t stand the fragrance. Also I prefer a thicker cream. I’ll be going back to my Cerave skin renewing night cream.

This is a white cream that is light. Not as heavy as the Olay's Regenerist line. It has absolutely no smell to my nose. I even called Olay about it- the associate said it has a light fragrance-but again nothing to my sense of smell. It's not a heavy moisturizer. And it did not break me out. Having a jar does not bother me at all So inexpensive for a good ingredients- it has niacimide, tocopherol ( vitamin E), some retinol ( does not have the smell of usual retinol creams), panthenol ( Vitamin B5) and some beta hidorxy acid in the form of ethylhexyl salicylate and this is at the bottom of the list Did not have great expectations based on other reviews here, but for me it's great

I decided that at 44 a night cream was necessary. I have oily, acne prone skin, but this product has not caused any breakouts. I use Differin and Retin A on alternating nights, followed by this cream. My skin definitely looks smoother and brighter. I wish that it was unscented though. It doesn’t smell bad, it’s just totally unnecessary to add fragrance. It comes in a plastic jar, and I know that jars aren’t as hygienic as pumps, but there’s something luxurious to me about dipping my fingers in the cream. It also reminds me of watching my grandmother at her vanity performing her nightly beauty ritual. So many jars and bottles.

I picked this up after I finished my jar of Neutrogena deep moisture night cream, and I quickly remembered why I had not repurchased this before. Don't get me wrong, the cream feels wonderful, hydrating and absorbs quickly. However the scent is overwhelming to the point that I could not breath. I have asthma and this really triggered my asthma enough that I had to immediately wash it off. It's a nice scent but just too overwhelming. Unfortunately I will have to return this item and find something else.

This was an effective moisturizer, but I couldn't use it more than a few times. The fragrance is overwhelming, and it stings my skin bad enough that I wanted to wash it off.

Recently, I took a big hit in the finance department. I used to use high end moisturizers, but just couldn't afford it anymore. My skin tends to be very sensitive and breaks out easy, so I was nervous, but I tried this out. It is amazing. It moisturizes my skin so well. My skin is dry and this stuff is AWESOME. I put it on, go to sleep, and when I wake up my skin still feels moisturized. I love what this cream does for my skin. It has not broken me out. My skin looks better than ever! I am on my fourth tub of this night cream. I will continue to buy it over and over again. I feel like this cream does better than my high end creams that I used in the past. Also, the price point is WONDERFUL. For women on a budget, this lil' jar of awesome is at a GREAT price and yields GREAT results. I don't have anything bad to say about this night cream and will continue to buy over and over again!