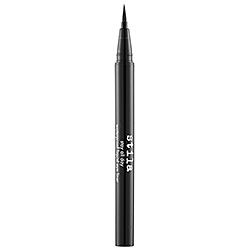 Fabuluous! Got this Intense Black in a mini size as a gift from Shopper's Drug Mart. I use it as a waterproof brow enhancer; I have very dark eyebrows (still, at age 70), but there are some pesky white ones growing in. I don't want to pluck them, as my eyebrows are thinning anyways. So the very fine brush is perfect for painting over the white brow hairs; I had no problem with it going over onto the skin. I think the colour is fine and glossy, maybe later I will go to a less intense colour, but for now it's very good! I'm not sure about the price because I got it for free, but I put mid-range, which is what Stila has been in my previous experience.

This eyeliner is great for my sensitive skin and eye area. No irritation whatsoever. Glides on smoothly without tugging or skipping. The color I'm using is "intense labradorite" which is sort of a dark grayish brown. With fair skin and blue eyes, I find black is too stark. This color is intense but not overpowering for daytime/office. I use this to line the top only-- I use a different product and color for the bottom lid. Stila stays in place all day, but DOES wash off easily with soap and warm water (which is good!).

This irritates my extremely sensitive eyes. I have both black and anthracite and while I do use it from time to time, usually I regret it as my eyes become slightly irritated. I have exceptionally sensitive eyes so this may not be a fault for most people but I did want to write a review for others with sensitive eyes. It does work but I also find the edges often wear off (probably since I rub my eyes from the irritation without realizing from time to time). I don't ever manage a smooth line with this. The length and hardness of the liner tip is makes it difficult. My eyes are quite a round almond shape so it may be that a shorter tip is easier to manœuvre for such eyes. Basic liquid liners like Rimmel give me the smooth line quickly and easily. La Rose Versailles (the Japanese brand) pen liner gives me that smooth line. I have bought that one many times over the years and adored it. However I find cake eyeliner is completely non-irritating to my eyes so I'm sticking to that from now on

I've had good luck with this liquid eyeliner, which retails at Sephora and Ulta for $22.00 a pop. I know we're supposed to toss makeup items like this after like 3-6 months of use, but I had one that I kept and used infrequently for over two years (and it did NOT dry out on me, which I was pleasantly surprised); the only reason I tossed it out was because I bought a new one and didn't want to continue using the old one in case it would mess with my eyes being that it was so old! I have purchased the Intense Black one countless times and I used to also own the Midnight (deep blue). This doesn't budge on my eyes all day, just as the name claims. I highly recommend this to anyone in the market for a waterproof liquid eyeliner. Now if only I can find a drugstore dupe for this, then I'd be 100% happy!

This has been a major game changer for me. I could never find an eyeliner that did not smudge, so I had pretty much given up on eyeliners - now and again, I would get fired up and buy something new, but always end up returning it because who wants to keep checking yourself in a hand mirror to make sure you don't have smudges under your eyes. The only eyeliners I used were some version of gold, because if that smudged, it was not a big deal. I tried a LOT of eyeliners (most are reviewed on Makeup Alley for the benefit of others like me.) This does not smudge. EVER. Easy to apply Options other than jet black -- in fact, a very good range of colors! I bought the chocolate brown, which works much better for me than black, which can be too harsh, and then, I went back and bought the lighter gray (alloy) - I love them both.

I truly can't say enough great things about this product. As a makeup artist with difficult skin, 9 out of 10 products recommended to me don’t work for my skin type or match my preferences, but a recommendation from a friend for this product if life changing. I have slightly hooded eyes which aren’t always the easiest when it comes to liquid liner. Between outer corner creasing and potential transfer to my lids, cream and gel liner has always been my go to, but it’s not as versatile as a liquid, especially when it comes to glitter shadows. Admittedly I stopped wearing winged liner a few years ago when my career path started bringing me into work early in the morning because liquid liner just became too much of a hassel when getting ready quickly and just simply didn’t have the patience for cream/gel formulas. This liner changed all of that. It’s the most fluid felt tip I’ve ever used, I don’t have to press for color, it just flows smoothly and it never skips. Much to my surprise it holds up to my 12 hour days and sensitive/watery eyes. I use this in black daily, but the smoky quartz is beautiful for a softer look and the white is a white liner that actually is true to color and shows up intensely, which is hard to find.

I have this in dark brown. It looks really natural. Can create very thin lines and is so easy to apply. Have not ever smudged on me before even when I cried.

Love this! I have oily lids....so I use Mac paint pot to help prime first...then eyeshadow and this stuff in midnight blue! Gorgeous on my brown eyes. The perfect Navy color....not bright blue. Very conservative and goes on very thin. And it lasts until you take it off!!!!! FACT! Edit - unfortunately, his dried out super quick. Bummer. The felt tip is way too long and the very tip gets dried out and almost fuzzy. Really won't work right after say 7 uses. For $22 idk. I'd rather Maybelline. Way easier to use and lasts much longer.

I love this. I use it in Jade which is not as harsh as black. If I put a little powder on eyelid before applying, this will stay put all day and not fade. I've repurchased several times. Love it.

This is an awesome eyeliner and I am so glad for Ulta’s 21 days of beauty because I never could bring myself to try it! I’ve been using this over a week and it is going to be my new go to. First off, I have very oily eyelids and this lasted the whole work day on me. The eye liner I had been using before would wear off about 30% and I thought that was good for a full work day. But what never clicked in my head is that sometimes I would have dark eyeliner gathering below my winged eyeliner. My former eye liner was basically wearing off and moving down. I had always blamed the eyeliner I used in my waterline for that, but I was blaming the wrong product! When I looked in the mirror after lunch and I didn’t have that issue with Stila - game changer. I’ve tried a bunch of eyeliners and never had this much success (thus why I was settling for something that wore off during my day). Recommend !