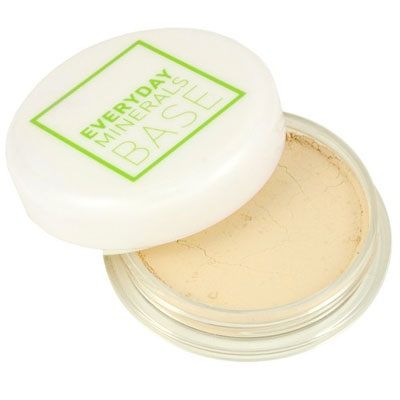 I have been using this forever. I love the product and the colors are great but the packaging is terrible and you get very little product for the price. All that being said, i love the ingredients and it’s a great daily foundation that’s all natural.

The coverage is not very strong but it evens out my skin. I spot conceal underneath though, so it is more like a setting powder than a foundation for me. It calms my skin though and doesn't cause further breakouts. The packaging could be a lot better. It's hard to get product out after a while. Shade range is very good and almost overwhelming. I have repurchased this a few times and I would recommend it if you don't mind having your skin peek through. If you need a perfect face I would not recommend it. Also in the summer it does run when you're sweating.

overall: 6/10 This is a nice setting powder, but it doesn't have enough coverage for me to want to use it as a standalone foundation. I have the shade Rosy Ivory which works well for my NW15 skin tone. This powder is well-priced which is good, but the packaging is not the best. I find it difficult to get product out of the sifter without screwing the lid on and shaking it vigorously. I have other powders I like more, like the Maybelline Shine-Free Loose Powder, which is cheaper and easier to obtain, so I wouldn't repurchase.

I’ve been a loyal bare minerals user for years. However, the lightest shade was always a shade too dark for me but I kinda just put up with it (whenever I looked around at other powder foundations I couldn’t find anything with the right combo of being a good shade and having good ingredients for my fussy skin). I stumbled upon everyday minerals while I was trying to find something with even simpler ingredients than bare minerals and better shade selection. I used the matte base in 0N today for the first time and it was sooo nice. Wore better than bare minerals, felt lighter, and finally, finally, actually matched my skin tone perfectly. I tried it from a sample kit and the blush and shimmer was also great. I have extra sensitive combination acne prone skin and so far, so good.

I struggle with finding powders with coverage that work for me. Talc makes me soooo itchy so that really limits which powders I can use. Laura Mercier sinks into my pores, Becca didn’t match my skin and looked makeupy, coverfx just hates me. Everything I try from coverfx has broken me out. I used to use the NYX stay more not flat, but this time when I got it, it didn’t have any coverage or mattifying powder. And don’t even get me started on bare mineral, it irritated the crap out of my face. I’ve used every day minerals off and on for about 10 years so I decided to give it another try. The formula. It’s a loose powder and it has pretty decent coverage. I use a MAC 109 to blen it in over bare mineral complexion perfect or and my skin looks so pretty. Just naturally flawless. This isn’t totally matte. More skin like. Some days, my skin ends up shiny within an hour and I have to layer a mattifying powder on top. Other days it holds up better. On a normal day, it last all day for me (ie no sneezing, wiping nose, naps). Shade. I have to mix two to get a good match. I mix rosy fair 0C and rosy ivory 1C and I’m around NC 15, revlon buff 150. Packaging. It has a twisty thing to cover the sifter. I have to pound it to get product out. So I think I’d like the holes to be bigger with the twisty cover. The packaging has become thinner and more flimsy feeling over the years which disappoints me. Price. I think it’s fair. They used to have better bundle deals but I’m not overly bothered by that. Overall, this is a great, non irritating mineral powder foundation. It’s the only one I have not only never returned, but also repurchased.

This is my mainstay foundation. Makes me up and evens out my skin tone, and still manages to look amazingly natural. A lot of people have mistakenly thought that I don't wear makeup! I have good skin, minimal blemishes, of a partially sensitive nature and this foundation does not make me itch. My choice brush to apply it is the Everyday Minerals flat top kabuki brush. Hard to get the foundation to tip out when it's full. It gets easier once the powder can move around in the packaging. Would like to try out the Semi-Matte formula!

The reason I gave 5 is Everyday Minerals is an excellent product. However, I will not purchase again because the number of color choices have been discontinued by 50%. I started purchasing their products in 2009 & loved the color's, perfect match for my skin tone. The current choices are so limited that I cannot find a suitable match. Very disappointed that the company has imposed limitations on long term customers, limitations are my worst pet peeve.

I have been using Em in shade 2N (fairly light neutral) for several years and it is the only shade that I've found to match my freckled, fair-olive weird skin tone. It doesn't contain bismuth, which is AWESOME, because so many mineral powders do and bismuth gives me an instantaneous itchy rash! This has great coverage for my sometimes flushed cheeks, and has never caused a breakout. After eight hours, I do need to blot my T-Zone and reapply. My only complaint is that the holes in the tub used to be bigger, but now they are so tiny that I have to bang the tub on the counter to get any powder to shake out into the lid- not cool when the husband is sleeping.

I bought this in the color 2w . perfect yellow based but I like the way the semi matte makes my face look way better . I also felt that the matte didn't do any better then then semi matte and controlling oil. I still got Shiney after 6 hours and it would wipe off so easily . good product but I feel like I could really do better for that price . cheaper then bare minerals yes but not the best out there. ( I'm currently experimenting with meow Cosmetics, Lucy minerals, and ulta minerals )

Of the three EDM base samples I tried in the free trial kit, this is the one I expected to like the least and actually ended up liking the most. However, I would not actually use it as a regular foundation, so did not mark that I would purchase it. While the semi-matte formula moved/shifted on my skin on a balmy day and left me a bit shiny/sparkly, the matte formula stayed in place and even through a one hour cardio workout. Although that's the hottest/sweatiest I was able to put this to the test in March on a sample pouch, I was still impressed by its staying power. The coverage is on the fuller side of medium, though it's not actually full and doesn't create a cakey, powdery or otherwise mask-like effect. It provides even coverage, blurring minor blemish remainder marks and neutralizing light redness. I still used liquid concealer for my dark circles. The shade 1W was a perfect match for my skin and the finely milled powder went on easily and blended nicely. It felt fairly light on, though not as weightless as the semi-matte. The reason I would not commit to this on the regular is because it did feel somewhat drying on my combination/dry skin. I think that may generally be the case with many powders (and I'm used to using a liquid CC), even if the mineral formulations are purported to be the lightest. So I wouldn't say wearing it was completely "comfortable"; I was still aware that I had makeup on. I will give it credit though, in that in the short trial I used it, it caused no itching, irritation or skin problems. Also, you needed the least amount of powder of the three bases to get the "right" amount of coverage. It's worth a try though - especially since you can try for free - if you're looking for medium, even coverage in an affordable mineral formula.