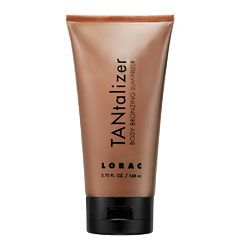 No I really loved the spray in a can and cannot find it made my legs look great plz help find it. That was my favorite tan spray on. I would buy a case but looked everywhere best blend in for legs arms and face the one in tube to shinny and not the sam????????????????

Beautiful color and smells like vanilla, does not fully dry and transfers to clothes very easily.

I can't believe no one else has mentioned this but this stuff never actually &quot;dries&quot; so it leaves a mess on your clothes! I'd recommend it if it was truly transfer free.

This gives great natural bronze color but I just don't know if I can cope with the smell. I can't even describe this... it's like pipe tobacco almost ... Mixed w that rank tanning smell ughhh I dunno. But I LOVE how it looks, just healthy color &amp; a gorgeous glow... and it didn't rub off on my clothes at all

I love this stuff! It's pricey but well worth it for special events when you need to look good. I used it for the first time on New Year's Eve and it made my skin look gorgeous and glowy with my sequin dress. I had tanned the night before with Fake Bake 5 Minute Mousse and used this to enhance the tan. It looked great! I don't apply this UNDER clothes because it would just get all over the inside of whatever I'm wearing. After I put on my dress, I apply this to the areas that are exposed, like my arms, legs, shoulders, and chest. It has a bronzer shimmer to it that you can see in pictures and looks amazing! It doesn't look tacky or glittery, just glowy. I def recommend this for going out at night when you want to look your best. Just let it dry first before you rub up on anything and be conscious getting it wet, because it washes off.

This is my first try with a body bronzer so I can't speak to whether this is better than anything else out there but it appears to be a good product for me to try out based on the overall good reviews. It did apply nicely and provided a nice glowy color to my lower legs -- but I had to blend it in really, really well due to my pastey white legs. Also, when I first squirted it out of the bottle it had separated, so that was kind of annoying. It is not transfer-free in any sense of the word but that actually worked in my favor and allowed me to blend it more evenly after it &quot;dried.&quot; It gave a nice glow even to my never-see-the-light legs. Despite its intense, glittery, pinky-brown-orangey illumination glow when I played with it in my fingers first, it settled down into a beautiful glow when applied and I was pretty happy with it before I left for work. But &quot;tan&quot; it is not, more illuminating glow than anything, but still provided a nice-mostly-natural-looking-oomph to my legs. Be warned, it washes off with WATER. I rinsed my hands off after application with nothing but water and it came right off to reveal a completely clean hand. I wore it on a warmer day and it burst into splotchy patches the first chance it got. I even used a setting powder, just in case. If I dragged my finger along where I applied it (several hours after application) my finger had a sheen of product on it. Even after it was dry it transfer lightly to my shorts. I don't know, alot of ladies seem to love this product, but to me it's just a messy fuss to deal with that isn't worth it. I'd rather mess around with a self tanner over this stuff because it won't transfer and lasts longer than a few hours even if the color isn't this nice glow. I'm glad this was only a deluxe sample free with purchase because I would have returned anything I had paid for with my own money.

I am a Bikini Barista, and it's very important that I am tan and even more important - EVENLY tan. I do use the tanning beds AND I get spray tans, but sometimes areas of my spray tans fade and it's pretty obvious when you're half naked. I was originally using the Sally Hansen spray can and it's very similar to this , it's body make up and it makes you more tan. The Sally Hansen stuff smells TERRIBLE though and it is pretty hard to spread and dries really fast. It's also very matte. The Lorac Tantilizer is shimmery but I'd say it's more luminizing than anything. It smells absolutely divine, it's like a vanilla cupcake. A little goes a long way, and it's kind of runny/liquidly which I really like because it makes it spread really nicely. It really does give you that J Lo glow! I loved it so much I had to go to Sephora right after work. It also looks GREAT in pictures. I'm an NC35 in MAC and my body is a lot darker than my face, so I need the Darker version but I bought them both to mix or just in case I get more pale. It's pricey, but a little goes a long way and it really hides any imperfections and makes you look airbrushed!

I put some of this on my arms and I look like a shiny disco ball. It has so much shimmer it is ridiculous. I'll try it at night, but in the daytime, it is just silly.

I received a deluxe sample of this in the Deep shade from Sephora. It's labeled for body use but I use a very small drop mixed with physical sunscreen or foundation that's too light. Of all of the bronzers I use for this purpose this gives the prettiest result and the best color for my skin tone which is medium/ olive with some redness. This is a pretty, luminizing bronze colored lotion with a nice vanilla scent. Not an overpowering smell and no teen sparkles. This has much more of a toasty golden brown tone than most bronzers. I find that this compliments the olive tones in my skin and really cancels out any redness even when I use just this mixed with sunscreen. This is pretty dark straight out of the tube as it's meant for deeper skin tones so if I ever use this on my body I'd mix it with lotion or sunscreen there as well. Because it's pretty luminous I tend to use this less for day to day and more for special occasions, dinners out or when my skin is just looking really dull. Since I have combo skin with an oily t-zone having this on all day with foundation requires blotting or powder touch ups every couple of hours to avoid looking shiny. Less maintenance is required when I just mix with sunscreen. I have zero transfer issues when mixed with sunscreen and only as much as the foundation I mix it with is prone to. This also works great straight out of the tube for contouring or on the cheek bones as a bronzer. This sample is going to last a long while since I only use a tiny bit at a time but I'll repurchase to keep this around for the summer. My mini tube looks like a small version of the full sized and so far my only gripe is that it's easy to squeeze way too much out with hardly any pressure wasting product and making a mess but at least they're generous with their samples.

I'm not sure if the product being reviewed is the self tanner or just the bronzing cream, but I purchased Lorac Tantalizer and the cream inside is a very shiny, pearlescent orangish color. When applied to the body, it looks ridiculous and washes off in one shower (luckily). However, I did find use for this product as a facial bronzer. I mix it with my tired moisturizer, apply it to my cheekbones, and behold, a sheen bronze look. I don't totally hate it, as like I said I did find a use for it, but I won't repurchase.