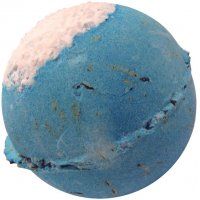 www.bombsoverbathtubs.com After an intense bidding war on Facebook Marketplace, I became the proud owner of a 45lb dumbbell. When I went to pick it up first thing in the morning, I found myself by the mall, in a Lush to be specific. Given the fact that I had parked in a handicap spot (I know, I know) I needed to make a decision fast. I asked the lady (who looked exactly like Silvermist from Tinker Bell and the Great Fairy Rescue) which bathbomb I should get. She pointed me to “Big Blue”. When I picked this bomb up I couldn’t help but reminisce about the sweet nectar from my childhood. And you can bet your pretty little boots that I’m talking about Big Red. If you have not heard of Big Red it means you haven’t heard of the original “red cream soda”. Big Red, or “the stain maker”, was originally marketed exclusively in Central and South Texas and around Louisville, Kentucky, including parts of Southern Indiana, aka “God’s Country”. The drink was insanely popular down south, and if you don’t like it you are crazier than a raccoon under a red wagon. Its stimulating zest is created by mixing orange and lemon oils with good old-fashioned vanilla used in cream sodas. After leaving Lush, I went to a nearby bowling alley and purchased a BR. Sip after sip, my mind drifted back to childhood memories, particularly hunting trips in Southern Indiana. As a young man, my uncle Mash (yep, that’s his real name) took me on deer-hunting trips in Gnaw Bone, Indiana (yep, that’s its real name). It worked out well because my parents could go line-dancing, and deer hunting was a two-man operation. More importantly, I loved deer hunting! Hunting with Mash was exciting for a young boy like me. First, I got to stay up real late. The Indiana sky never fades to black until around 9:00pm, but Mash always liked to wait until way past the witching hour to go hunting, since there would be fewer hunters on the road. Mash had purchased a burgundy Astro Van that left everyone else in the family green with envy. It was fully loaded… with trash that is! I remember it being littered with dozens upon dozens of empty Jolt soda cans and various Little Debbie wrappers. Complete with five seats, three doors, and a 4.3L engine, all the bells and whistles didn’t matter much to me. All I cared about was the TV/VCR combo entrapped in that wood casing between the front seats. One of the gnarliest things you can do as a seven-year-old is watch TV in a motor vehicle. As a simple farm boy, it was fun to pretend I was Ricky Stratton on those hunting trips. Unfortunately, Mash only had two VHS tapes: Ernest Scared Stupid and The Blue Lagoon. My father had banned Ernest P. Worrell movies after his injury, and I always respected his wishes both inside and outside the home. So, that left me with the 1980 romantic comedy centered around a shipwreck in the South Pacific. Imust have watched the Blue Lagoon fifty times in that van. I could never hear the dialogue over the Charlie Daniels music, but I memorized every scene on that lush tropical island. Even when I would hold the spotlight for Mash, I had one eye on those crazy kids awkwardly exploring themselves and that island! I would later re-sketch these scenes in the pages of my catechism. I found myself daydreaming at the “Living on a spare” Bowling Alley Bar, but I cherished that last sit. I ordered a BR to go, bowled a 210, and played a few rounds of House of the Dead 2 before leaving the bowling alley. Needless to say, I had worked up quite a sweat and was ready for a bath. When I got home I drew my bath, put on my trunks , prepared my music, and poured that bowling alley BR over ice. I dropped Big Blue in let it transport me to a tropical paradise. The bomb contained arame seaweed, which slowly released as the sweet sounds of James William Buffett engulfed the room. The bomb turned out to be a very quick fizzer, turning the bathwater into a turquoise shade that would hide the sight and smell of even the strongest, most pungent urine. As I gulped down my Big Red, the water was whisked into a vibrant shade of cobalt which, with the seaweed, invoked thoughts of being awkwardly and dumbly unfolded between the two sex-starved, ship-wrecked teens on a South Pacific Island. The sea salt added longevity to the “Big Blue” experience as well and exfoliated my skin for the full two-hour bath time. The one negative about Big Blue is that the seaweed sinks to the bottom and was brushing up against my Psoriasis during the bath and stuck to my scabs after. I loved the experience this bath bomb delivered on my beautiful body. Parlay that with the memories it conjured up in the ol’ noggin and it was quite the delight! Later that night I found a website to illegally stream The Blue Lagoon, and after doing some research I found that there was a sequel called Return to the Blue Lagoon. I also reached out to Uncle Mash in Lexington, KY. I am happy to report he still enjoys deer hunting and does it as much as he can when he’s not in surgery or on call. Overall, I give this 7.5 bangs out of 10. Rating - 7.5 Bubbles Music Pairing - Jimmy Buffett Drink Pairing - Big Red for me/Margarita for you Written by Chuck C. Longley

How am I supposed to clean these little crown sticks out of my bathtub??? Will never buy again.

Loved how this smelled and the turquoise shade it turned the water, but the seaweed was a huge turnoff. I got this in a gift set and had no idea about the seaweed, which seemed both unnecessary and slimy in retrospect. Really didn’t like having to clean the tub right afterward!

I bought Big Blue as I was looking for a relaxing bath bomb with some citrus in it, and as Big Blue is scented with lavender and lemon oil, it fit the bill. The sales associate also advised that Big Blue was good for relieving muscle aches and tension. It is a large bath bomb so I cut it in half to get two baths out of it. It turns the water a bright shade of blue and is full of seaweed. It doesn’t stain the bath or clog the drain which is a bonus. I found the scent very relaxing and it did help relieve some tension. This bath bomb leaves the skin feeling quite moisturised and not at all dry. I really like this one and would definitely repurchase it. It is also one of Lush’s more inexpensive bath bombs which is great considering its size.

I liked this bath bomb enough to buy it again, but not enough to make it my &quot;go to&quot; for bath bombs. I definitely liked the scent, but I can see how it wouldn't be for everyone. A little bit of lavender and other florals, citrus, and some earthy type scent as well. It didn't leave me smelling super strong, which I appreciated, but left a kind of film (?) or sticky feeling when I got out, and I ended up rinsing off after like I do with most baths. I assume that was because of the seaweed. My bath bomb had nowhere near as much seaweed as some people's pictures, so I let it drain out with the water and didn't have issues with it clogging the pipes. It turned the bath tub deep blue green, but didn't stain me or the tub.

I like this bath bomb. It's really nice and moisturizing, leaves the bath water a nice bright blue shade. What I absolutely hate is my tub being full of seaweed and having to spend 15 minutes after my bath collecting all the seaweed as I do not want to risk clogging up my pipes and having to contact a plumber. Doesn't stain the tub.

This warrants a huge 'meh' response for me. Many 'Lushies' (I really dislike that term..), the usual suspects on the youtube scene and so on swear by this bath bomb so I had good expectations. Lush staff and literature often refer to the ocean when marketing this, which again, kind of sold me. Why was I so underwhelmed? The scent, while not offensive, is not reminiscent of being by the sea.. more an odd citrus scent with a bit of lavender. Calming yes, but not something I'd associate with the ocean. I enjoyed the light blue colour of the bomb created but I was mildly irritated by the mass of seaweed floating around my bathtub. Again, I say &quot;mildly irritated&quot; because I was somewhat relaxed. It didn't stain my bathtub though which is always a plus. I may repurchase this again, just to give it another go and see if I can fulfill my mermaid aesthetic dreams but again, I wasn't blown away by this bomb (pun intended, sorry not sorry). If you are looking for alternatives, I would get Lush's Blue Skies and Fluffy Clouds bubble bar. It's easier to distribute into smaller pieces and it produces a deeper blue bath colour (minus the mildly irritating, drain clogging seaweed). Yeah ok, it's not a bath bomb but it produces bubbles. Bubbles!

I loved the scent of this bath bomb, it was one of my first. However, I was partly disappointed as I wasn't a big fan of the seaweed in the bath which stained my bath and was a struggle to clean out. But it was nice!

This was my first bath bomb. I loved how pretty and blue it turned the water. I did feel really relaxed. There was a ton of seaweed in it though. For me it wasn't a huge problem cleaning it out but I could see how some might not like it. It's not a over the top amazing bomb that wows you. It's nice though after a long day for a bath to relax. My skin did feel very soft afterwards as well. Smell wise it didn't have a smell really. If it did it was very dull and I didn't smell it. Didn't stain my tub or anything.

This was my first bath bomb I ever tried by lush. Pros: -Can be split for multiple uses (considering how much bath bombs are, this is quite nice) -Gentle, simple smell -Didn't break me out -Water turned super blue...looks like the ocean ! (I think that's cool anyway) Cons: -The seaweed (it got stuck in my drain and had to be tediously fished out) Overall, I really enjoyed this. I think next time if I buy this, I'll wrap it in nylon or something to catch the seaweed but if you need a good bath bomb to try, go for this one !