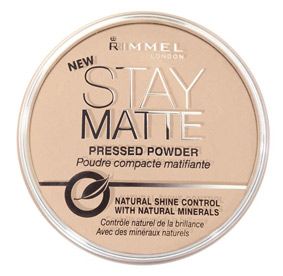 This was my first powder ever when I decided to start wearing makeup 2 years ago and I still have this today. It's so cheap and it's one of the best powders I've tried and I've switched back and forth a couple of times. It's so soft and blends right into your skin there's really not any cons about it. The only thing I wish would change is the packaging, I wish it was more compact like but it doesn't really matter I love this powder and it's basically my ride or die.

I don't know why I didn't review this product earlier because it's my all time favorite powder, I've been using it for 5 years and I went through dozens of them. I always have backup in my drawer. I use it in the lightest shade. I always apply my powder with a puff. I dab gently on the product, then press on my skin (forehead, nose). It keeps my face matte all day long, doesn't oxidize. I'm not a fan of loose powders because they're generally messy and aren't practical. I've tried high end powders and most of them, especially for the price, didn't do nearly as good job as Stay Matte. The only thing I don't like about this product is the packaging- I know, it's a cheap product, but it would be a lot easier to use if it came in a compact, like most powders.

This powder does work well I'm just not a fan off the parabens and chemicals that it has. I also don't like that it doesn't come w a puff. I personally don't use a puff but some people do so there should be the option

I think this is a good powder from the drugstore. I wish that it had more oil control because I have really oily skin and my oil starts to show on my face after 5-6 hours. I like how the powder sits on the skin after I apply it and I like to use it to set my eye primer before applying shadow. The packaging really sucks though. The lid shatters easily and it's just not efficient. Overall, this is a good powder, but not outstanding.

I don't get the hype behind this product.I think one of the main pros for this powder is the price point, £3.99 for 14g of product is great value. But that is where my praise stops. I have used this for a while on top of 3 or 4 different foundations and swapping between this powder, Hourglass Ambient Lighting powder and L'Oreal True Match powder, so feel I can give this a fair review and comparison. First off this is a hard powder, it is not soft, silky of finely milled like my other powders. I use the RT large powder brush to apply my setting powders. It doesn't blend well on top of my skin and I can feel it sitting there (urgh!) and it sinks in and exaggerates any pores or fine lines. As for oil control, there is none. I get oily through out the day on my nose and chin but have never considered myself a particularly oily person. However when I wear this powder I can feel the oil coming through and the powder ends up looking and feeling cakey and shiny all at the same time. I personally think this is a horrible powder. There are better high street powders out there like the L'Oreal True Match powder. I wouldn't bother with this one.

This is a nice drugstore powder regarding the quality and price. I have it in transparent shade. I can apply it in a thin layer under my eyes and on my T-zone. It is not long-staying, unfortunately. My nose gets oily after 2 hours later so not very good at mattifying as its name claims. I use this powder under the eyes to set the concealer because it has no shimmer so it looks very natural. The packaging is not good, really. It seems cheesy and easy to break. If you don't want to splurge for a transparent powder, then you can buy it. I prefer to try other powders instead of buying this one again.

Um YEA, Wow I am seriously impressed. I didn't expect to be, or expect much from this powder since it's just a cheap drugstore brand and they're all around the same, right? WRONG. I had tried the Physicians Formula right before this one and omg it was chalky and just really bad. And much more expensive. Even though I got it on a major deal, I still returned it. Usually, I like things like The Body Shop All in One Face Base (which is like a pressed powder foundation) and when that got hard to find I switched to Tarte Double Duty Creamy Confidence pressed powder foundation, which I really, really love. I use those after/on top of serum/bb water-y foundations to set it and add some more coverage. (Side note, but I can't use regular liquid foundation and while I like the more mineral powder ones too, they get a little heavy.) So I wanted a regular powder just for really light days, maybe when my skin is better, just to set what I have on. Basically, I wanted a regular setting powder that would work on top of any liquid type foundation without too much of it's own color or whiteness but maybe a tad natural color to match. I had also tried things like E.l.f. loose powder and Essence and nothing was noticeably great. So I didn't expect too much with this and even considered getting translucent. I ended up with Sandstorm and I'm really impressed with the finish and color. It's not like a powder foundation so I am not expecting full coverage, just some mattifying and setting. I also don't want too much mattifying because I don't want to look cakey. But this really does perform well. I feel like it matches me in color more than the Tarte even though the Sandstorm is a little teeny bit cooler in undertone and I'm not. And though the Tarte is a bit more luxe and creamy feeling, and doesn't settle into lines as much in a swatch, but you really can't tell in the end result, which is crazy. This feels much more powdery and hard in the pan, and seems harder to pick up with a brush or even in a swatch, but it's obviously working. It lasts so long, which with a serum foundation/summer heat they really do melt often times. But I feel like I still look good at the end of the day so I'm really happy about that. I don't think it would show on bare skin so much, but again, as a powder I don't expect that. I love that the pan is so big even though it does seem likely to break. I will absolutely get this again....what a great deal. Update: After using this for a while, I realized a few things. First off, I can't wear it too heavy, it will get cakey and break apart throughout the day. I think a lot of that depends on my foundation, because over my Smashbox bb water it's OK, but over a stick foundation it's less impressive and I see it breaking down at the end of the day. That might be a foundation issue, but I sort of wanted this for "drugstore" days as I have a higher end powder for nicer days and all I wanted from it was to buff and set my makeup. Secondly, the color is a tad off. It's not noticable on, but in swatches it's slightly more orange than I am. I still think it's OK and better than others but idk if I'd bother with this again.

Okay I DO NOT get the hype around this powder. Can we even call it that? I have to not just swirl but rub my brush in it multiple times to get any sort of product to be deposited unto my brush. It is also not easy to open the packaging, I'd prefer a flip-open compact. In any case, this is getting only 1 lippie because of the product quality itself. I much much prefer the Bourjoise healthy mix powder- that's silky to the touch! I've purchased that one at least 4 times in the past 2 years.

this powder is great, and i've been using it for a few years now. it does have more color than you'd expect from a translucent powder, however i'm extremely pale so the color of it works for me. i don't know how well the tinted ones work, but the translucent one does even my skintone a bit, it tones down the redness in my cheeks but doesn't cover blemishes or anything of course. the texture is very smooth and soft, and even when i've put a lot on you can't tell i'm wearing anything. i don't wear foundation at all because i hate heavy makeup, (i very begrudgingly wore a bb cream for my wedding this year but aside from that have only worn powder for a few years) so if i say this powder is invisible, it really is. i use a large fluffy brush to apply it after moisturizing, it gives a stronger coverage if you put it on while the moisturizer is still tacky. i generally need to reapply twice throughout the day. that's more frequently than some other powders i've tried, but it doesn't cake up or feel heavy no matter how much i reapply it, plus with the insanely low price i don't mind using more. i took a point off for not being cruelty free and the packaging being terrible, like others said the plastic lid absolutely always cracks and breaks, and i'm on my third or fourth one of these. but hey! you can always cover the lid in duct tape as a reinforcement like i do, if you want to give off the very cool lazy clumsy poor girl vibe. ANYWAY i'd definitely rate it 5 if i was rating entirely based on how the product functions. i recommend this, especially if you're ultra-pale, but once i can find a cruelty-free powder that i like as much and can afford, i won't be using this anymore!

All About Matt Fixing Compact Powder