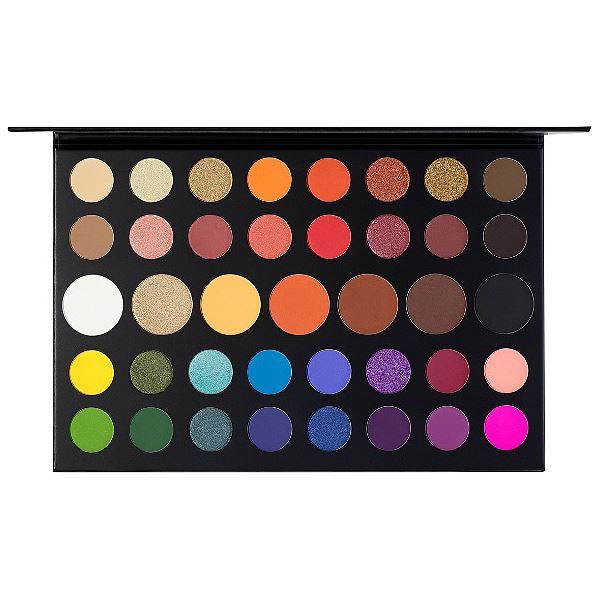 I love this palette and if you are looking for a product to be able to do every look you will ever create in your life, these eyeshadows are a necessity. There are a lot of great, beautiful, pigmented shades for a very reasonable price point and you will never need another pallete ever again if you don't want to purchase one. The package came in very well packed, bubble wrap and all, and there were no damages. So, if you are looking for a lot of variety in an eyeshadow palette for a low price and have it still be good quality, I highly believe that this is the product for you.

I've had the James Charles Palette for a while, and waited to really give it a few tries before writing a review. Like other Morphe palettes it's a good value, they a priced much lower than mid end brands but the majority of the eyeshadows are well pigmented. I haven't used lower end shadows in several years just because the color payoff was usually terrible. this is my second Morphe palette. I like that there are a variety of colors from brights, to naturals so it can be used for almost any kind of look. I also like that again as with other Morphe palettes all of the colors have at least one coordinating shade. I hate buying palettes that have those dud shades that don't really work with anything else and typically are difficult to use. My only complaint is that the pigmentation is not consistent, most are good but a few could use some help. The matte shades seem to be the most pigmented, followed by the shimmers second, than the glitters being the least pigmented. Take the shade Artistry for example, it's a beautiful perfect purple glitter. Shade wise it's may favorite in the entire palette. However the color payoff is not that great and needs to be layered to achieve a nice level of color. The shade Hello is a nice light blue shimmer, but takes a couple layers to look nice, but it does pair well with Playground which is a nice bright blue matte. Years ago UD had a palette with a shade similar to Hello. I never wore that shade in the UD palette because it didn't really go with anything else in the palette. I also really enjoy the shades Sister, Mary, and Literally. They work well as a trio, or pairing two of the three for a nice summery look. Blendability is very similar to to pigmentation, though the shimmers seem to blend the best, Mattes in the middle, and glitters again last. With primer these do last and the colors stay vibrant without creasing or fading.

I love this product so much. I love the color blends and the pigments. This is awesome that James loves makeup so he made a pallet, thats just awesome. There are very bright colors and very toned down colors. Also, the colors have such nice and cool names that refer to James. I rate this product a 9/10 because it is very nice and pretty. The shipping was great and it came fully packaged in bubble rap and a box. The makeup washed off really nicely and I didn’t have makeup still on my face after cleaning it. I love this product and I recommend to get it if you’re a James fan. Thank You

james charles x morphe unleash your inner artist pallete! Shocked that i couldn’t find any reviews on this pallete as its soooo great but here goes!???? Ok so, i got this pallete a few weeks ago and its all ive used since i got it, i cant put this pallete down its so versatile???? It has 39 shades ranging from Colorful to everyday wearable colors. Even a highlighter that can be used on the eyes or the face???? the layout of the pallete is the same as the 39A which has bigger pans in the middle of colours that would most likely get used the most (transition colors, black shadow, white shadow, highlight) the rest are smaller shadows. I find these shadows are super creamy buttery and blend out like a dream! They layer on top of eachother so well and dont look muddy atall , i want to say i do use my P louise base so that might factor into how well the shadows perform. The shadows do not swatch the best on the arm. However they perform fantastically on the eye so please ignore arm swatches as they do not do it justice. The black in this pallete is bomb !!! ???????? 100% worth the money and a must have for any makeup lover or even a beginner ( as theres neutrals and pops of color when you fancy ) I wanted to include that because some of the shades are straight up ‘pigment’ ( so the colour is more intense than some of the other normal shadows ) i have seen some people complaining about staining of the eyes from shades like Skip (the pink) which i tested on my self and worn for about 7-8 hours i had no staining when i removed my makeup. Dont forget to use code JAMES for 10% off #sisters!