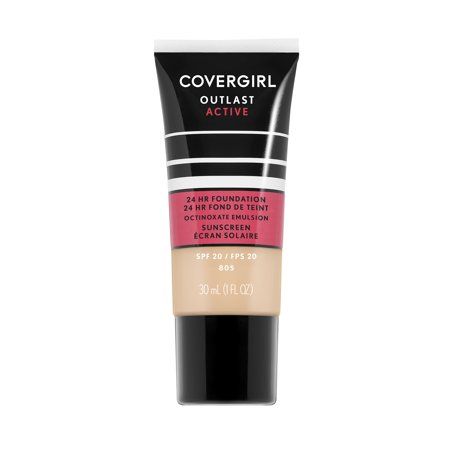 For me, this foundation is just okay. It takes awhile to blend and has a slight waxy feel to it (sort of mask-like). The coverage is about average and I’m not crazy about the color selection either. Once blended it does stay on well. Clings to dry patches. Just not great for me.

Initially I didn’t like this foundation. I bought this in the hopes I’d have something that is easy to travel with (squeezy tube) and would be a quick slap on and go foundation, especially because it is transfer-proof. Upon first application it completely accentuated my dry skin, giving me the dreaded polka dot face on my chin, and I don’t even have large pores! The color is a good match for me but the formula was questionable on my skin. I really wanted to like this so I tried applying it with a pump of Vichy Mineral 89 mixed with it and let me tell you, this was exactly what my skin needed. The finish was gorgeous, luminous, and my skin looked healthy and more even in tone. Mixing in the Vichy did not change the foundation’s claim to be sweat-proof and transfer-proof, it remained so. I learned a valuable lesson- do not immediately reject a foundation if the shade matches but the texture isn’t perfect right away. Sometimes, a very small change can make it magical. It won’t always be the case but it’s worth considering, it could make all the difference.

Best foundation I've used... maybe ever. Here's the thing: I sweat. A lot. On my face. I usually use a product called SweatBlock to control it, which works great for about a week, stopping sweat as well as controlling oil. I can use just about any foundation when my face is under the influence of Sweatblock without fear of runs or patchiness. However. I do not always use SweatBlock. And when I'm not using it, my face always sweats. Walking my dog in 70 degree weather. Sweat. Inside the grocery store. Sweat. Doing laundry in the apartment I always keep too cold. Sweat. And of course, doing anything even remotely more physical than those things, such as dancing, running, vacuuming, digging a grave. Sweat. Sweat. Sweat. It's a hyperhydrosis thing. Excessive sweating. Most people who suffer from this have it under the arms. Some people have it on their hands and/or feet. Even fewer people have the delightfully embarrassing cranial facial variety. Of course, I've always been a bit different. Lucky me. As a makeup lover, I have struggled so much with finding foundations that can stand up to the combination of humid, southern, coastal heat &amp; my face sweating problem. It's a battle I've fought bravely &amp; valiantly, yet never won. Until now. I can't remember the last time I used a Covergirl foundation. I think it was the original 3 in 1 Outlast. It applied nicely, but the second I took the stairs my upper lip became a weird waterfall of beige colored streaks. A beautiful image, I know. I usually use Revlon Colorstay because at least it stays on my cheeks a bit longer than every other foundation &amp; it doesn't break the bank. I've used Estee Lauder Doublewear with similar results, but a much more expensive price tag. I've tried every long-wearing foundation I've ever heard of, &amp; I've never been happy with any of them. When I saw Covergirl had a new foundation that claimed to be waterproof &amp; sweatproof, I didn't expect much. I actually used Walgreens points to buy it. I tried it the next morning along with my usual moisturizer, powder, blush, without primer or setting spray. I went about my day, grocery shopping, walking my pup, doing women's work around my apartment, &amp; could not believe my foundation hadn't dripped even though I had been sweating. The next day, I danced for 2 or 3 hours, as I am part of a dance group. This dancing is aerobic intensity, with swing dancing playing a large part. I was sweating from my brow, my forehead, chin, cheeks, nose, upper lip, &amp; dabbing my face with paper towels, but by god, my makeup stayed put. All of it. Foundation, blush, powder. Everything. This is magic. Madness. I love it. I've been using this stuff for about 2 weeks now &amp; praying it will never be discontinued &amp; that more brands will take note &amp; start making foundation of this caliber. Not only does it stay put, it feels light on the skin &amp; covers very well. Not full coverage, but I don't like my makeup to be a total mask anyway. The shade Buff Beige is just right for me, &amp; for reference, I wear 180 in Revlon Colorstay. I can't remember any shades in other foundations off the top of my head, because as I said, Colorstay was the best I've been able to find, thus is the foundation I've used most often. If this stuff can stick to MY face &amp; look pretty, I can almost guarantee it will stay put on yours. Great job, Covergirl. I lost faith in you a long, long time ago, but it has now been restored by this wonderful foundation.

A surprising, underrated foundation! By no means does this last 24 hours, though. But that's fine, because I just needed this to hold up over an 8-hour work shift and it does, and wears off rather gracefully. The longest I've stretched it is work plus half an hour at the gym and . . . I guess it survives a vigorous workout, but if you prefer wearing makeup to the gym, you're probably better off with something either lighter or more matte than this. That being said, I love the satin finish of this foundation. It has medium coverage and looks really skin-like when set with powder. It blends out well and has a mild, clean scent that wears off quickly after application. The plastic tube packaging means not only do you not waste product, but you can cut it open and easily scoop out the dregs. While the lightest shade is slightly darker than my skin tone, I can still make it work and intend to fall back on this foundation when I inevitably get frustrated trying to find my match in another product.

I love this foundation! I have fair, dry, sensitive, maturing skin. It has good coverage, a light skin like finish, non-drying (I always moisturize), good wearability, good color for cool tones (Fair Ivory), and a bonus of sunscreen. The packaging is convenient and the price is good! The slight smell when first put on (which dissipates quickly) reminds me of a high end foundation I liked but this is far superior to that one and six times cheaper! I’ve think I’ve tried about a hundred foundations and this is the most all over perfect one I’ve used in a long time!

I loved the CG Clean BB Cream so I thought I should try this as well. Nothing like my beloved BB Cream. This is like a mask. I couldn’t find the right shade either. Being NC30, Buff Beige was too ashy. Medium Beige was too dark and pinkish. The rest in between had pinkish hues as well. Not for me.

I did not expect to, but I absolutely LOVE this foundation! I've been interested in Covergirl since they went cruelty-free, and also have been looking for a non-Instagram-full-coverage foundation, as they look great in photos but SO fake and cakey in real life. I've also been taking really good care of my skin (thanks to K-beauty) so I don't need as much coverage. This stuff is fabulous! I use it with Fenty primer and Soap &amp; Glory Kick A$$ powder. The color I chose matches me just right and the coverage is natural. It lasts into the afternoon after being applied at 7am. Beautiful formula and I will continue to repurchase. This is better than other products I paid a lot more for.

I’m surprised how well this worked for my oily acne prone 49 yo skin! I’ve been trying to find a foundation with higher than spf 15. This one has spf 20 so I thought I’d give it a try. The color is great, the staying power is great, and it held up to heat, humidity and sweating. It’s a “24 hour wear” makeup, which I never wear mine overnight. But 12 hours later and it still looks pretty good! It’s fragrance free which is always a bonus for me. I’m loving this foundation.

Love this as an everyday foundation! It stays pretty matte on my very oily skin, only patting once or twice a day. Coverage could be a little thicker though. I wear a pore filling primer underneath and the foundation goes on very smooth with a wet sponge. Once dry, it doesn’t transfer until I get oily. Very light, I usually find with drug store brand that they oxidize a lot with the humidity where I live and my oily skin (or PH of my skin) but I haven’t found that this one does that! I love my Fenty foundation more, but for everyday + sun protection, I’ll take it.

This looks lovely on my skin and lasts a really long time. I have mature, oily but dehydrated (retin A) skin and this really works for me. It was much better on my skin than the Chanel foundation I was trying to make work. Way to go Covergirl.