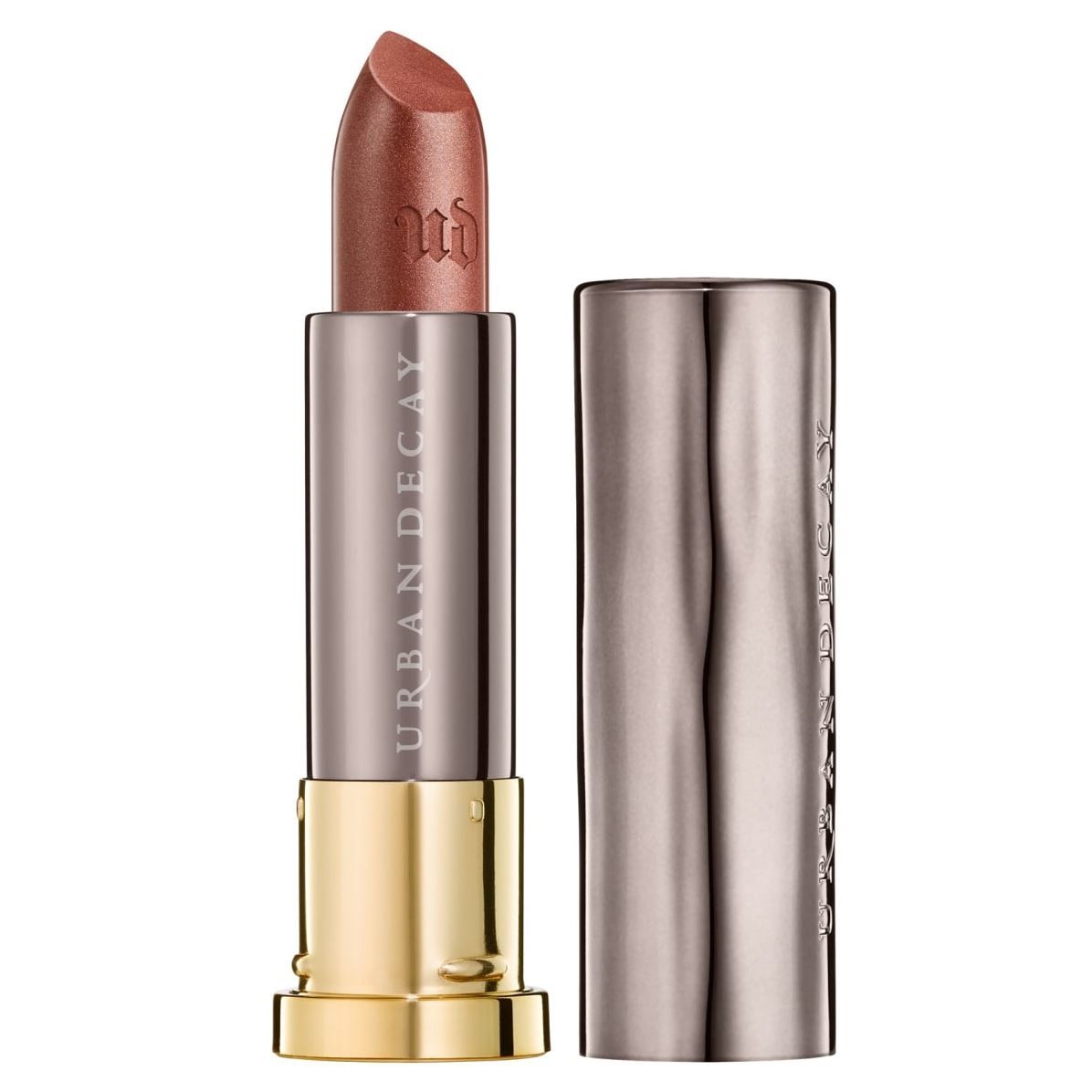 Colors: Rush and Rapture Price: I was able to get these at Ulta for $9.50 on sale, but full retail is expensive. I love the container for these lipsticks. They are gorgeous to look at. You can set them up on your container. The metal is heavy which I prefer. The lid is very tightly locked into the body of the tube. I hate cheap container because sometimes the lid comes off and you end up with broken lipstick. I love the creaminess of the formula. It is very moist on the lips and has a slight plumping effect. It does not last all day, but I don't expect that. My other lipsticks from Lancome and Estee Lauder will survive eating, this lipstick does not. RUsh is a beautiful pinky nude. Rapture is a mauve pink brown lipstick. My favorite. PRO: Creamy, highly pigmented CON: decent wear time, but not as long wearing as my other holy grail lipsticks even with lipliner For the sale price, I could not beat it. Get them, there are better lipsticks on the market for longevity. But these are by far the creamiest lipsticks I have ever worn. So if you don't care about longevity, you will love these.

I've had 4 of these lipsticks, one of them was in the old packaging. The ones that I do have now are hitchhike, backseat, and carnal. I have to say out of the three, I prefer the formula for backseat the most (cream). While the comfort mattes aren't terribly drying, they do settle into lines and emphasise the texture of my lips after a few hours. With the cream formula, there's no such problem. The pigmentation is stellar, and the lasting power is average. I definitely have to reapply after eating, but that's to be expected of a bullet lipstick in my opinion. It does fade a little on the inner corners of the lips throughout the day but nothing major. My biggest gripe is that I dropped my comfort matte lipstick in the shade carnal the other day, and the packaging broke a little, meaning that the cap would fall off easily. From a high street brand, I don't expect the most luxurious packaging but I would at least expect a more durable one. It isn't cheap, after all.

Well, this lipstick's packaging is less stellar than their old lipsticks (Revolution) which were quite hefty and weighted. The Vice Lipsticks are in a more traditional bullet style, and literal bullet casing (in my opinion) lipstick that I have gotten used to. There's no discernible taste or scent. Many different finishes which may or may not work for you. It seems they released an entire collection large enough to rival Mac's lipstick collection. I have not tried the Mega Matte, so I cannot comment on this one, but the sheer shimmer, shimmer, and cream formulas are moisturizing and last decently well, and do not make my lips peel. There seems to be a lot of similar colours in different finishes, so it does get a bit confusing at times. Some of my favourites are: Comfort Mattes [ not really matte, sort of like a satin finish ] - Hitch Hike, Uptight, Safe Word Cream - Ravenswood, Fuel, Fuel 2.0 Some of their names are a bit raunchy or derogatory but then again, it is Urban Decay.

overall: 7.5/10 I love the Cream finish of these lipsticks, but I'm not a fan of the Metallized or the Sheer. I haven't tried the mattes or shimmers. I found the Metallized to be drying, and the Sheer to be too waxy. The Cream finish is lovely, though. It's similar to Maybelline's formula, but Urban Decay has a much larger shade range. I have the shades EZ, Mrs Mia Wallace, Firebird and Manic. Would purchase more.

I've purchased two shades from this line so far, in crème formulas. Both glide on easily with your typical crème shine that wears down within about an hour to a matte look. Long lasting enough, leaves a slight color stain if you don't have a chance to reapply. Not drying to the lips, but stays put, no feathering. To the colors... 1) Ravenswood. Are you looking for a mid-toned MLBB shade? Neither too dark nor light, the beauty of this particular shade is hard to pin down, I can only compare to other crème lipsticks with a similar depth of color. It's not nearly as mauve as Revlon's Mauvy Night, not as reddish as Maybelline's Rum Raisin, not as brown as Revlon's smoky rose. It's described as a warm plum. Whatever - the shade is frickin' perfection, really pretty and wearable day or night. Great color payoff in one swipe. 2) Tryst. A hot coral upon application, it dries down pretty quickly to one of those super bright happy summer pinkish reddish orangey shades. LOVE. I had a similar color in a Lancôme lipstick which I immediately tossed, this formula is so much better. Not an everyday shade, but super vibrant and fun. EDIT: close to a year after purchase I had to toss Tryst. Became dryish, started to wear off very patchy, AND feathered a bit too. Yuck. On a bright note the other shade Ravenswood, is still perfect and one of my top five favs. So perhaps the formulas are inconsistent according to shade.

I've bought several Cream lipsticks, but unfortunately the quality differs between individual colors a lot. &quot;F-Bomb&quot; is great, sharp red shade for &quot;I'm the bitch manager&quot;-days. The color is perfect for my NC15 skin. It's a warm red but without a hint of orange. It's also the shade which made me sour towards buying new UD colors, because F-Bomb bleeds. It bleeds a lot. Even if I didn't eat or drink while wearing it and used a good lipliner, the lipstick transferred over the lines and colored my chin below lower lip. Not the look I was going for! I can't return makeup in my country, so I had to trash it on the second day. I'd give it two lippies, just for color. Won't repurchase. &quot;Ez&quot; is orange.based cousin of &quot;F-Bomb&quot;. It doesn't bleed, but vanishes as soon as I eat anything. It doesn't leave a stain behind, which is a pity because my lips look stupid lined with bright red when there is no lipstick left. Three lippies, won't repurchase. &quot;Crisis&quot; is rusty, dark, brown red. The color doesn't budge, it doesn't bleed, and it stays stuck from dusk to dawn no matter what I eat.The only reason why I have so many Vice lipsticks in Cream is because I thought they all would be as good as Crisis! It's my reliable workhorse lipstick and the one I choose when I don't want to touch up my makeup during the day. Five lippies. I will probably repurchase this. &quot;Naked&quot; is pale, nude, peachy shade. It's reliable like 'Crisis', and the color is ok, but it lacks something I can't quite point at. The shade is boring and plain, but it works for nude lip. Four lippies, wouldn't repurchase because I think I can find more flattering shade for same purpose.

I bought UD Vice lipstick in Wrong Number and Liar. Although the texture is very creamy and comfortable, unfortunately neither of them are very flattering on my lips because both of them settle into fine lines. As a result, my lips look dry and old.

I feel like the formula for the Vice lipsticks varies greatly not only from texture to texture, but also from shade to shade. That being said, I do feel that these are consistently good across the board. I most recently picked up &quot;Faith&quot;, which is what I'll be focusing on today. This is a gorgeous metallic bronze with a slightly coppery look to it, and it's perfect for a summery, glowy glam look. I absolutely adore this shade, as it doesn't wash me out like a lot of bronze lip colors can. It's not too light, but it's also not dark enough to make it look stark against my light olive complexion. It also doesn't create any kind of yellow cast on my teeth, which I appreciate. In fact, my teeth look a little whiter when I wear this! The formula is in the &quot;Metallized&quot; range, which is my favorite of the Vice lipsticks. It's creamy, yet stiff enough to last for a good long while on the lips without sliding around or migrating outside my lip line. I get five hours easy out of this shade if I'm not eating. It withstands drinking coffee and water and the occasional snack. I can't really expect any lip color to last through lunch or dinner, so no points off for that. It's also lightly hydrating, which is wonderful coming from a metallic shade, as I usually find lipsticks of this ilk to be rather drying. The price at $18 is high if you're used to drugstore prices, but it's lower than most other high-end lipsticks while performing just as beautifully. The packaging is attractive, simple, and very sturdy. I'm likely going to explore the sheer and sheer shimmer shades next, but I'll definitely continue to purchase from the Metallized range.

I don't like cream lipsticks.4-5 years ago I bought a cream lipstick of Lancome and and it had gone immediately.After that I bought lipsticks from Golden Rose,which were matte but dry.So I was searching for a matte and hydrating.I bought today a matte lipstick from Urban Decay and I can't believe it.It is cream and matte.Amazing.I am very satisfied.The price is good.Unfortunately there are not many colors in matte.I forgot to mention there are two formulas.Mega matte and comfort matte.Mega matte are very drying,while comfort are hydrating.The only color i liked was bad blood.So i won't buy again.Mac lipsticks have better colors

SkinVery Oily, Fair-Medium, Not Sure

The metallized versions are bomb with a great feel and relatively good staying power. The bullet is a little hard to open at first, hoping that with greater use, it gets easier. I would definitely repurchase.