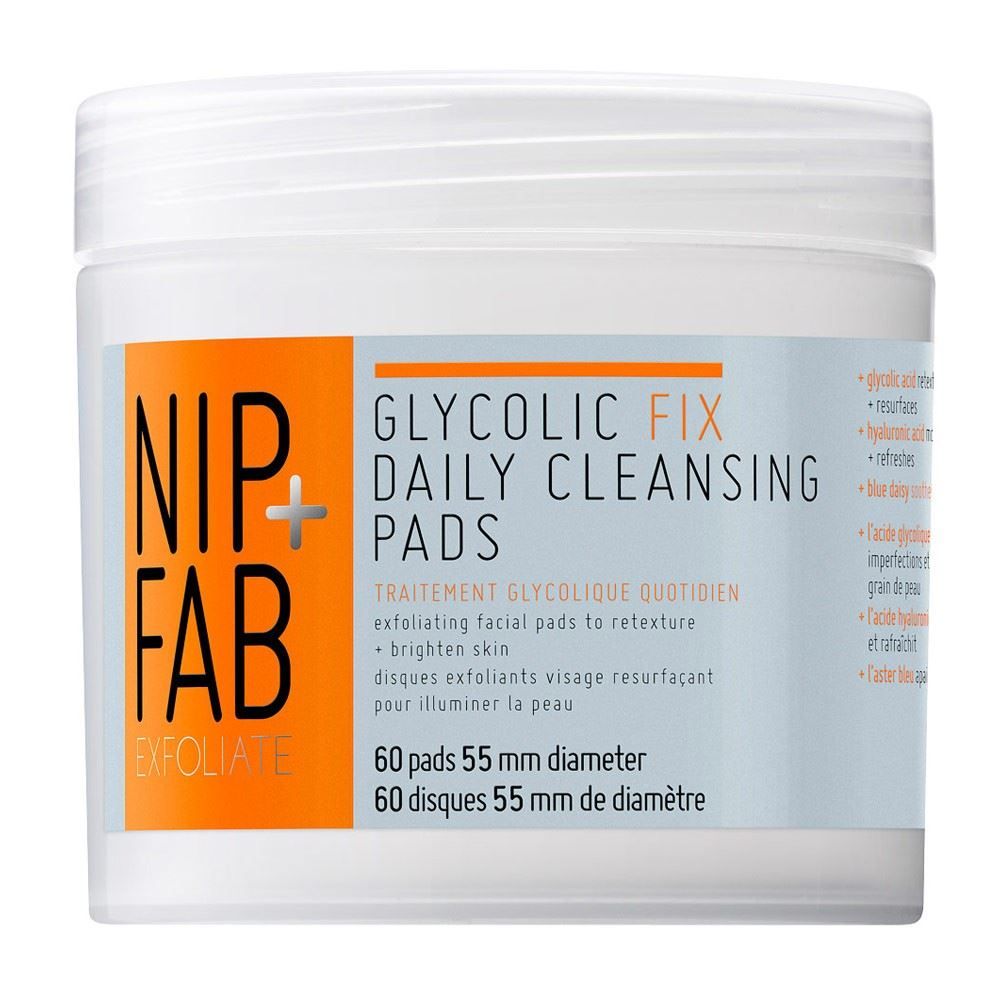 In my old age, I've become an exfoliating freak. The first step in my morning routine is wiping my face with a glycolic pad of some sort. I've tried a few brands, and this is among the best and cheapest. it is fairly gentle on my middle-aged skin. One pad is enough for my face and the backs of my hands. I put the juice on, let it sit for a minute while I take my daily medications, then wash it off with DHC soap and water. I follow this with a vitamin C serum of some sort, and my skin is smooth, soft, and almost completely zit-free. The tricky part for me is finding this product in B&amp;M stores. This brand is not commonly carried in any store near me, and I lucked out by finding it at Marshall's.

I've repurchased these several times already. I think exfoliation is KEY to keeping your skin looking nice, and these provide gentle peeling on a daily or twice-weekly basis (whatever works for you). It's better to work your way up in frequency, as with any acid or exfoliating product. They're pretty reasonably priced at about $12-13. I may end up shifting over to First Aid Beauty pads, which do cost more, because they're lactic acid. For whatever reason, my skin prefers lactic acid to glycolic. But these are great.

This is probably my favorite skincare product. I can use it every night before bed and it never irritates my skin or makes me break out. My skin actually looks improved every morning. It does leave a bit of a sticky residue. I stopped using it recently only because I can't find it sold anywhere! It used to be at CVS and Ulta, but they don't have it stocked when I check.

My friend suggested Dr. Dennis Gross AHA pads when I had a GC to Sephora. They were amazing but I couldn't imagine spending $60 on 4 cotton pads ever again. Fast forward a month later, and I found the Nip+Fab pads on sale at CVS. I love these so much more, because they are intended for daily use and therefore more gentle. After I remove my makeup with grape seed oil, I swipe ones of these only face. They keep my skin looking glowing and milia at bay. And if nothing else, the price can't be beat!

I have highly reactive facial skin and chest skin and tried these with some trepidation. I bought the little travel size first from Superdrug for £1.50 to test it out. It has five pads and within two I was confident I'd be buying these again. As it turns out, they have performed marvelously on my skin (generally oily, dehydrated, prone to patches of eczema when over-stressed or upset by irritant products) with no bad reactions at all. I ordered the full-size tub before the travel size had run out and will use the travel size to take pads with me when I go away on holiday. After 3 weeks of use just at night (I swipe on face, neck and chest after removing make-up thoroughly and leave for a few minutes before rinsing in the shower as residues tend to upset my skin) the longstanding rough and flaking areas between my eyebrows and on my upper lip - which are usually highly upset and left raw by any attempt at manual exfoliation - are smooth and non-flakey and look better than they have in years. The rest of my skin looks more refined, more even in texture and less red (I have rosacea, though mostly under control I have persistant 'diffuse redness' as my dermatologist says). I would advise a patch test at first to check you are not sensitive to any of the ingredients but am fairly confident in saying that if I, with my lifelong thin, reactive skin can use these things and experience success, most people probably can.

I've been using these pads for about 6 months now. I patch test everything and though I had an initial break out from them i kept going just to give it it's due. Turns out the small break out was a purge. I began using them in the pm after cleansing after patch testing for about a month. I purged again mostly around the chin and jaw area. It was a little disheartening but I decided to push through because I figured the mini purge didn't last long so why not. I'm so glad I did, my skin cleared up beautifully, after a few weeks, even acne scars I had from previous breakouts began to disappear, my skins textures evened out and I even began to glow a little. I had so many compliments about my skin after using these. They are a little tacky on the skin, but I only use them in the pm and let them dry in for 20 minutes before going in with any other products so that doesn't really bother me. This review is only my experience with the product, if you want to try these expect a breakout or two as your skin gets used to them, they are an active and can cause purging. And as with every product patch test, patch test, patch test, you never know what your going to react to.

I use these pads daily they are fairly mild but great for melting and removing makeup, keep my skin fresh in between professional peels but I still need to use a high concentrate glycolic serum a couple of times a week for my skin to be glowing!

I'm on my third jar and will continue. My skin is much smoother in texture and appearance.

Love this product. It’s affordable and convenient to purchase (Target, Big W, ASOS). I find it works well on both aging skin and acne prone, oily skin. Leaves your face feeling fresh without the dryness

I've been using both the normal daily pads and extreme pads (every other night) and I have found great improvement in my skin after a few days. This is my first time introducing glycolic products to my skin regime and it's the best thing I've done. My skin is usually oily, and tend to always get black heads. I have found black heads have reduced alot, my overall skin appears alot more smooth and glowy. Im always surprised how much dirt/left over makeup is removed by the pads, after my usual cleanser. It shows that I've not been cleaning my face as clean as I'd thought. Makeup applies alot more smoother, due to less dry patches and smoother surface. It's important to use sunscreen daily. I can't imagine going back from not using these pads, they're easy and convenient.