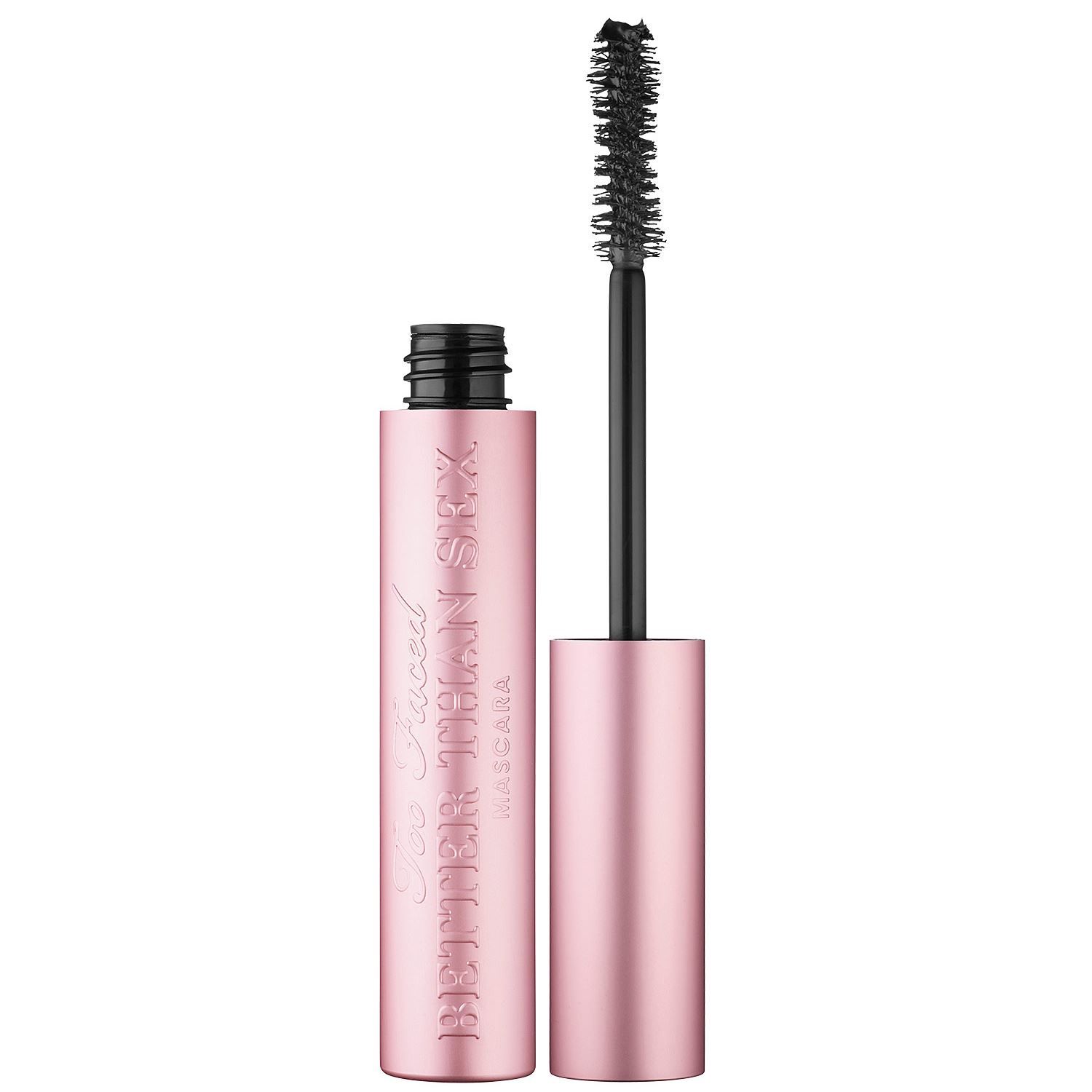 I did receive this as free gift with purchase. Loreal Lash Paradise is supposed to be the dupe for this mascara, so I was excited to try this! I love the containers, so pretty. I curled my lashes like I normally do. I applied and I was so excited, it was so easy to apply, did not transfer to my lid, and it make my lashes not clumpy. It separated and made them full. I was so happy, then my eyelashes fell. I will not repurchase. Loreal is way better and cheaper. CON: does nothing for my lashes PRO: does not flake off

I’m so torn on this mascara. It looks great on my lashes, not too clumpy or too long which can be annoying since I wear glasses. It’s great for a full face, maybe a little too dramatic for me for a natural everyday makeup look. The problem is that it flakes around my eyes and gives me raccoon eyes. I have somewhat oily skin and almost every non-tubing mascara does this for me, so on the one hand I don’t want to hold it against the product, but on the other hand, I don’t want black rings around my eyes. If it’s a short-term thing like a few hours of dinner/drinks or an event, this is great. Not for all-day makeup.

I really liked this mascara--it applied beautifully, didn't clump, isn't too wet or too dry of a formula, the brush grabs most of my lashes. I have two gripes that makes me not reach for this mascara anymore. 1. The brush doesn't grip the lash all the way through, if that makes sense. It grips it and then when I swipe up, I feel like the ends of my lashes aren't coated very well. 2. This stuff flakes. I had originally thought my under eye concealer was fading very quickly because my under eyes were really dark but the mascara was just flaking off and settling under my eyes, making everything darker that it had any business being. There's a lot of hype with this mascara and honestly it's not that great.

This mascara would've been really good if it didn't smudge on me. I have oily lids and at the end of the day, some of the product migrates to the bottom lashes. With that said, I can see its appeal and why it's so popular with some people. I already have long lashes and OK volume and this mascara seems to get every single lash, even the tiny and shorter ones. The result (on me) is pretty dramatic and all it takes is one coat. Two coats on my lashes look almost ridiculous for daytime and tends to clump a bit. The pigment is very black which I'm sure adds to the "drama". It does add a bit more volume to my lashes which is what I prefer since my lashes are already long. I took off a lippy for the smudging I get from this. I'm sure this doesn't happen to everyone but on me it does. For that reason, I only wear it at night when I don't have to have it on the whole day. It also doesn't hold my curl very well so after several hours, my curl is not as elevated as when I first apply it. Since this isn't waterproof, I find it easy to remove with makeup remover. Would I purchase it again? I don't know. At $25 each, it isn't exactly cheap. Additionally, I've used other brands that were cheaper that provided similar results without the smudging factor so as it stands, I'm on the fence with this one.

Obviously not all skincare/makeup products work the same for everyone - but when it comes to this mascara, the dupe - L'Oréal Voluminous Lash Paradise Mascara - is PHENOMENAL.. in fact, I like it better than the Two Faced. They're almost identical - packaging, colour, smell, formula/texture, thickness. Only difference is the price. So if there's a dupe, as good as the L'Oréal Voluminous Lash Paradise Mascara - why not just get that one?

I keep going back to this mascara, though I've tried lots of other drugstore brands that have been said to be similar. Nothing does it for me like this one. It lengthens, volumizes, and stays put for as long as I need it to. It's quite dark, and I find it best to use when I'm doing a full glam look, otherwise it can be a bit much on it's own. A thick winged liner look pairs lovely with this formula. It's my ultimate favourite, even though it's on the pricey side. I love the wand shape, and the weightiness of the packaging in my hand.

Terrible. Smudges like crazy, even with multiple coats, the result is meh.. I'm not even going to use it up. Too faced has obviously been having some lower then average sex hahah waste of money.

In my opinion, whether you would like this mascara or not depends on your lashes. If they are long, you would love it. If they are short, you may not like it at all. We all have different needs and look for different results from mascaras; that's​ why it's the product with usually the most controversial reviews. This mascara gives an impressive volume. It covers every tiny lash making it visible but doesn't increase much the length. For the short lashes, the wand is a bit bulky, and it's easy to smudge mascara on the lids. It can't survive a nap - you'll end up with panda eyes, and it isn't resistant to humidity. Depends on your goals and the climate you live in, it could be a Holy Grail or not an impressive product.

The actual tube is a nice shade of pink and it’s hard material which is a plus for me. The brush itself it’s everything I look for when I think of a product that can provide volume. The only issue I always seem to have is that the product ALWAYS winds up on the top of my eyelids. Even if I wait in between coats. Granted, it may be because my skin tends to get oily, and I have switched between this product and Lancôme several times but it does only seem to be this mascara. I still use it. It’s just a hassle to constantly check on my lids and brow bone throughout the day

Purchased this after another lady in my office raved about it, read the reviews and most seemed to really like it. I have to disagree! The formula is really clumpy, I struggle to separate my lashes with this. It gives amazing volume but nothing in the way of length (which I also need). The brush shape is a little awkward. I don't think I will even bother continuing to try to make it work, its just not.. will go back to Smash Box Full Exposure