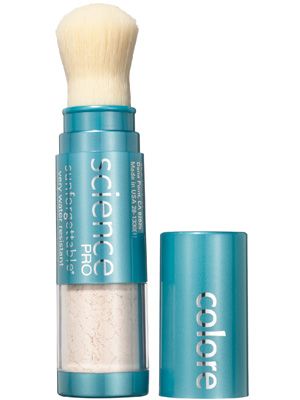 Great extra protection for Melasma, but i bought the medium and it was too dark even though the brand says that it matches most of its clients, and im not that light.... Its hard to tell how even the coverage is when you are putting it on.

I find this to be an excellent sunscreen. I have never gotten a sunburn while using it, and I appreciate that it can be applied over my makeup without messing up my foundation. It is quite expensive, but it lasts quite a while and I think the value is good given how well it protects me.

I love this product! Ive read all of the negative reviews and cant understand them.. I have been using this for years and I have never once gotten a burn or had any issues with it. Its super easy to apply, the brush is soft, the formula is silky and finely milled. I can carry it in my purse and apply it anywhere.. If im driving I put it on my hands to avoid getting any sun on them and my kids use it as well. Ive tried cheaper ones and the formula was totally different, and the brush was very scratchy. So for me its worth the $$ plus it lasts forever

This is an expensive, "luxury" powder "sunscreen" sold at the offices of many dermatologists, especially ones who treat women concerned with anti-aging and dark spots/melasma. Everyone agrees that despite the company's claims that you can use this as a standalone sunscreen, you should apply a liquid or cream broad-spectrum sunscreen SPF30 or higher in the morning, and possibly use the powder for subsequent reapplications throughout the day. I am returning this product because it made me break out, which is a deal breaker, and I will detail more below. I have used a slightly less expensive dupe called Brush On Block before, and I think that it was better than Colorescience. The Brush On Block had a nicer, softer brush and I had a much better experience with it, ie no breakouts. FYI, one Brush on Block ($32 for .12 oz) contains half the product and charges about half the price of Colorescience ($65 for .21 oz). But if you buy the set of 2 BoB ("Duo" is $54 for .24 oz), it ends up being over $10 less than CS. And I thought BoB only came in one shade but I just checked and see it comes in 2. I'm adding a separate review on the Brush on Block right now. Here are the pros and cons of CS: pros: convenient; pretty packaging; may appeal to folks who hate most liquid/cream sunscreens because those break them out. cons: brush bristles are cheap and scratchy; bristles shed (UGH); price is RIDICULOUS; algae extract may break them out. I think this broke me out because it contains algae extract. I have used Brush On Block SPF30 with no problems, but when I used Colorescience Sunforgettable SPF50 in Medium for 2 days, I ended up with large cystic acne -- one on my cheek and one on my nose -- at the end of the first day, which calmed down overnight, and then got bad again after using this the next day. I rarely break out anymore; although I have had breakout-prone skin for most of my life, I only rarely get a hormonal breakout on my chin now. I think that the tretinoin I have been using for over a year is really working. I know the whole "comedogenic ingredients list" is dismissed by some dermatologists, but Lithothamnion Calcareum Extract is an algae extract that is used in cosmetics as a binder, meaning it makes things stick together. Acne is caused by dead skin cells in our pores, and when these dead skin cells stick to each other instead of sloughing off, bacteria feed on these dead skin cells and grow. Anyway, when I checked the ingredients list before purchasing, I didn't see this ingredient or algae extract; HOWEVER, it is on the box of the Sunforgettable SPF50 in Medium that I purchased and have in front of me. It is the 3rd highest in the list of 15 inactive ingredients, meaning there is relatively a lot of this ingredient in the product. (Active ingredients are Zinc and Titanium Dioxide.) I guess I'm going to have to return this. Update 9/27/18: I wanted to add that since posting my review above I have been noticing that this product has been sent as free PR and in SPONSORED videos to a lot of social media folks, like youtubers with a very high subscriber counts. And supposedly companies pay an average of $60,000 for a sponsored video -- WOW. Clearly the company has a powerhouse marketing department, getting the product into thousands of dermatologists' offices throughout the country as well as paying youtubers to produce advertorials on social media. I think the high AF price of this product is to pay for the company's marketing & sales staff and activities. I did end up returning this, by the way, since the breakouts were deal breakers. And I didn't break out again after I stopped using it.

Product was pricey. 55.00us dollars. I couldn’t get the product to dispense. Placed in in tub with a puff but was too messy to use on the go

My problems with this product are the following: 1. over priced af - i've used other similar products that worked better 2. the brush doesn't dispense enough product to see it at all, either coming out of the brush, or on the skin 3. brush is scratchy on the skin and you have to press hard (I know because I used it on a black piece of paper to check if it was working. A small amount of powder only dispenses every 3 large swirls or so and you have to really press down. My response to this product was to buy a giant tub of uncoated non-nano zinc powder for super cheap, pour it in a little in a bowl and swirl the alimapure kitten face brush in there before buffing it on and misting it down with rose water (I can do this all while holding one breath so as not to breathe in the zinc). It looks really good on me and doesn't make a greasy mess like most sunscreens. I can also see how much is making it on my face by how much zinc is left in the bowl. If this product is spf 50 with this relatively small percentage of zinc and titanium dioxide, then 100 percent zinc can't be lower right? The zinc has a quality of really adhering to the skin in the same way as this powder. I bought the laluna brand of zinc off amazon. Bear in mind, I have quite pale skin so any white cast isn't super apparent. If you have a deeper skin tone there are various things you can add to the mix to create a sort of foundation sunscreen formulation. I've seen recipes online which include cocoa powder and cinnamon or mica powder. I'll use the rest of this product for my hands in the car but I wouldn't risk it in on my face, nor would I subject my face again to the unpleasant experience of this pokey brush

I'm sunscreen obsessed - and it's been a journey to find the right sunscreen for my skin: what works well with my skin tone, what can manage my combination/occasionally dehydrated and sensitised skin, what works nicely under makeup but equally, what makes my skin look pretty good without makeup. This is not it - I mean Ultraceuticals is my go to for everyday without fail, don't leave the house without it, sunscreen. HOWEVER - this goes everywhere with me for sunscreen boosting and general mattifying during the day. For some reason I cannot find a powder makeup (or primer for that matter) that can keep my shiny at bay. Every powder and primer product I have ever used (I'm 40, there's been a lot) has made me look a-pore-ling (yep, I punned it): my generally clear and unlined skin looks haggard, full of crater like pores, dull, orange - terrible basically. This powder, for some magical reason, simply enhances my skin, like it looks even, clearer than normal, it doesn't oxidise, I don't break out; truly, I love to use it. The fact that it boosts up my sun protection is basically the icing on the cake. It comes everywhere with my, the portability is unreal. I've never had an issue with the packaging, the lid has never come off, the product has never gone all through my bag (I mean, we've ALL had this happen, right?), I like the brush - I actually find it quote soft - I just use a makeup wipe or micellar water on a cotton pad to clean on a regular basis. My only issue is that I feel it is on the pricey side, but it does last a long time due to the small amount that you use each application. This is another caveat I must add......... PLEASE DO NOT USE THIS AS YOUR SOLE SUN PROTECTION - IT IS NOT ENOUGH - PLEASE SWEET BABY JESUS, USE A CREAM/LOTION FIRST. EVERYDAY!!!!!!!! EVEN WHEN IT'S CLOUDY!!!! Other than that - I love this product and will definitely re-purchase it

Beware to the super pale, it will look orange on you. The brush is too rough so I ended up emptying the powder and using my own brush and applying sparingly. Seems unlikely that much Sun Protection is added unless you use quite a bit.

It's great to find high spf product especially on powder form. I ordered mine (shade medium) on Amazon and have it shipped to singapore. The shade is a good match for my NC30 skin. But you have to hold the tube with the brush down for the powder to come out, it's not easy to apply on your face . In order to circumvent this issue, I placed the producton the hand first and then pick up the product and place it on the face... the product looks natural and not cakey which is good. But the brush is not good, it's rough and too long that the application is not precise. The dispensing mechanism doesn't work so that you can't really use the brush on the face directly. So I will keep looking for a better packaging.

I struggle with melasma so this year I set out to find all sorts of sunblocks. As many of you know, applying sunblock only in the AM is not enough! You have to reapply every x minutes or so. The thought of applying my sunblock over my makeup did not sound like something I wanted to do. Enter this awesome product! It's easy to fit in my purse, so whenever I need to reapply I just apply some over my make up. Powder goes on flawlessly and even gets rid of any shine. I see everyone complaining about the packaging. I must agree... it sucks!! I have to shake it really hard to get any product out which has caused me to over do it and waste some product. The other complaint has been the price! I do think it is over priced BUT the product has lasted me quite a while so I think it turns out to be a fair value.