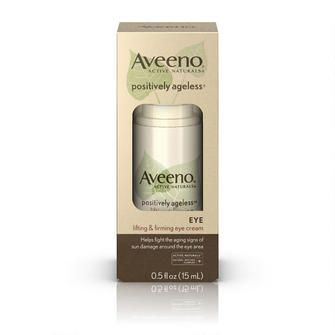 This is a useless eye cream. Perhaps the least of the problems with it, it stung the skin around my eyes for a few seconds after applying it. In the first couple days it dried the skin around my eyes out, and the skin was peeling pretty bad. When the peeling was finished, the cream still was able to make a mess on its own. When touched, it pilled and balled up on the skin. I put my eye cream on first, and when it came time to put on my face moisturizer, there was a line between the eye cream and the face moisturizer, and when I went to smooth it out, it would ball up and peel away. Then when I was trying to get the little bits off, I would inevitably end up creating more! And it's not as though there's a ton of dead skin on my face, I exfoliate with my Clarisonic almost daily. I don't feel as though this moisturized very well. It cost about $20 at Walmart, and after about a week, I returned it.

Ughhh! Totally disgusted with this product It did nothing but give my understeer a slight burning sensation ! After reading the rest of the reviews.. I now know I'm not the only one ! Wish I had joined this site along time ago. Because I surely wouldn't have purchased this product ! I still am a loyal Aveeno customer but I won't be buying this product again! Still searching for that right eye cream.

I really wanted to like this eye creme because I love aveeno products....but it really sucked It didn't improve my skin under my eyes and I don't know if anyone else experienced this but this creme peels off I've never had that I don't know if its suppose to do that ........its expensive and useless totally disappointed

SkinOily, Medium Brown, Not Sure

When I use this product it has a burning sensation on my face. Then after a few minutes I rub my face.. it takes all of the dead skin off. It is the best face exfoliator that I've ever had.. it does not work as a moisturizer. for me . I would highly recommend it for this purpose only.

I've been using it for a month now and seen no improvements..not a bad product but I wouldn't repurchase it.

I really wanted to like this because Aveeno has great cleansers and moisturizers, but I just didn't. I like the creamy texture and even the packaging made it easy to use and store. It burned the whole area around my eyes making my skin red. Once it dried my skin felt dry, not smooth. It's deffinately not greasy and dries quickly, so perhaps it might work for someone with less picky skin.

I'm on the search for an eye cream or eye serum for nighttime use in order to prevent wrinkles and fight off fine lines and discoloration. Unfortunately, I'm not sure if this product does anything. Pros: Creamy Blends well Contains some Natural ingredients Smells nice Doesn't irritate eyes Cons: Contains parabens Expensive for drugstore brand $19.99 When dried, it can peel off o_O Not sure if it does anything long term

This stuff is okay. I'm only 21 but I do have some under eye puffiness and some wrinkles there. I got this on a whim and it's just okay. It's alright at moisturizing but it does nothing for firming or lifting in my opinion. I see a bit of a difference immediately but that's it. There's no long term affect and that's what I'm looking for. This is alright under make up too but it will cause mascara to run a little bit and eyeshadows to go on uneven. This was a very blah product for me.

I have very sensitive skin that is prone to redness and allergic reactions, I have been using the ultra calming line from aveeno and wanted to try an eye cream, this stuff caused me to have a major reaction not sure what was in it that i was allergic to but it stung my eyelids when i first put it on and when i woke up the next morning my eyelids were bright red and peeling as if i had a terrible sunburn just there. I have been treating them with aquafor for the time being but am very unhappy with this product $17 for a drugstore eyecream that ravaged my eyelids. Kind of nervous to try another eye treatment for now will be doing research until i am sure that i wont get burned again.

I'm such a loyal customer of Aveeno, so I was hoping the best for this eye cream while on the hunt for my HG eye cream...unfortunately I have yet to find it. This eye cream seems to do nothing for me, its a gel consistency so its very cooling on the eyes. I also am not very fond of the way it tends to flake after its supposed to have absorbed to my skin. I still have quite a bit...not too excited about that : on the plus side, I love the packaging.

All About Eyes924 reviews