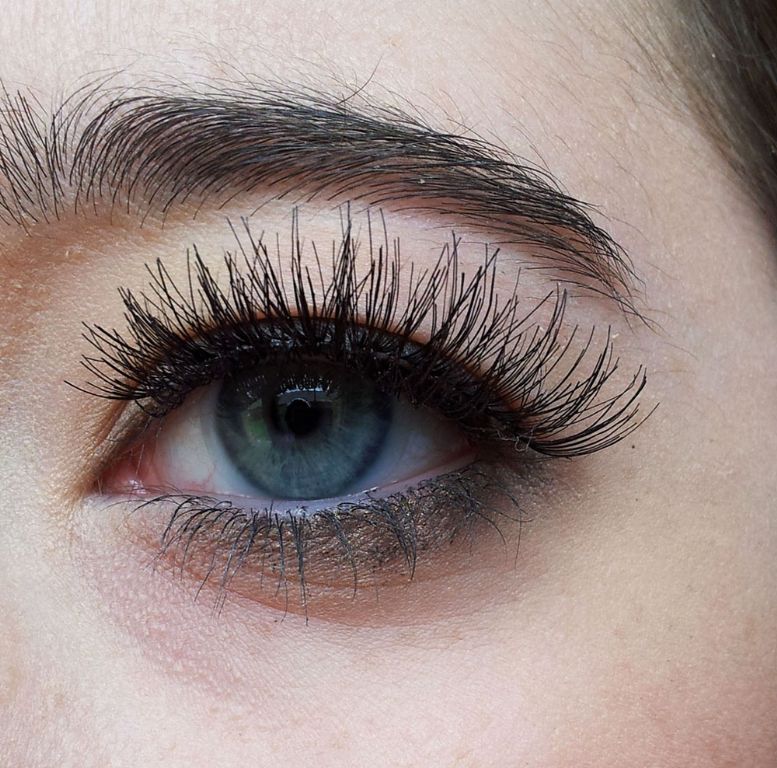 Of the false lashes I've tried thus far, the Ardell Demi Wispies are by far my favorite. They are easy to apply and stay on really well, giving you a very natural look of longer lashes. Also they are super comfortable to wear that I almost forget having them on. I purchased the Deluxe Pack for $5.99 at Ulta back in 2018, and although I do not wear false lashes often because I wear glasses on the daily (only use false lashes for special occasions where I know I'll be taking photos) I have been able to reuse these for quite some time without having to purchase more. For those new to false lashes, I would recommend the Demi Wispies for sure.

These are the most amazing lashes. They compliment every eye shape and they’re not too dense as to ‘close the eye’ up. The band is thin and keeps its rounder shape so that it doesn’t peel up at the edges once they’re stuck down. Can’t fault them!

<object onclick="ga('send', {hitType: 'event',eventCategory: 'Ajax Interaction',eventAction: 'PlayVideo',eventLabel: ''});" width="360" height="320"><param name="movie" value="https://www.youtube.com/v/ImHG2_RIuho"><param name="wmode" value="transparent"><embed src="https://www.youtube.com/v/ImHG2_RIuho" type="application/x-shockwave-flash" wmode="transparent" width="360" height="320"></object> These are very beautiful, full but natural looking lashes. They are easy to apply and easy to reuse for a novice like me. They aren't super long so I can wear them comfortably with my glasses. THey also don't add any vignetting to my sight. These are very affordable and you can buy them in multipacks from the drugstore.

I use these everyday. They last a long time. Walgreens usually has them on sale. One of the things that makes them better than others is the fact that they are pliable and you are able to adhere them to your lash line easier. I definitely think that these are by far the best false lashes out there!

My absolute favorite lashes thus far. The band is very thin and flexible making them super easy to pop on. I'm not the best at applying lashes and before these I would have to at least cut them in half which I wasn't a fan of. They are very comftorable. I don't even really feel them. I have zero issues with the ends popping up. They are about $3.50 USD per pair and you get roughy half a dozen applications per pair with daily care.

I have to admit that Ardell’s falsies is what got me hooked on fake lashes. These aren’t the kinds of lashes that will last many wears, though. I can get up to 6 wears with each pair as long as I remove and clean them carefully. I think for budget brand lashes that are readily available in the US, Ardells are the ones to get. The band on the Ardells (for the most part) are thin, yet stay curved when you take them out of the package. It makes for an easy, comfortable application. I’ve hardly felt the need to pluck out any Ardell falsies before the end of the day because they’re THAT comfortable. This holds true for the Demi Wispies. The Demi Wispies are my go to lashes. I really like how they can be used for either natural or slightly dramatic looks, which makes them so versatile for me. I think one thing for me to note is that I have large eyes but not a lot of lid space. Because of that, it’s been a challenge for me, personally, to find lashes that don’t touch my brows but are long enough to give the definition that I want. These fit the bill perfectly. I really like the style of the Demi Wispies for these reasons. Also, I feel that the cat eye shape (shorter on the inner corners, longest on the outer corners) is very flattering for my round-ish eyes. These lashes are fluttery, yet they give a good amount of volume without looking super fake or heavy. Needless to say, I can see why these are very popular lashes! I’ve tried the different variations of the Demi Wispies, and I thought it’d be helpful to compare the OG Demi Wispies to the newer variations. Also, I am almost certain that the Demi Wispies in the multipacks and the ones labeled “Wispies” in red lettering are the exact same styles as one another. Baby Demi Wispies – the actual lashes on these are shorter than the DWs, though they retain the same cut and band width as the DWs. I think this would be a great option for those with smaller eyes. I do think, for me, the lashes themselves were too “stumpy” that it just looked odd on me. Studio Effects Demi Wispies – Still pretty similar to the DWs, but there is an added thickness and length to the outer corners. I like these as equally as the original DWs. This one is more for photoshoots and other occasions that call for a bunch of photos. IMO, they do veer on being too unnatural for a “normal” day. Double Up Demi Wispies – Literally, it’s two of the original DWs fused together in one. The band is significantly thicker than the original DWs and the other variations, so this is the most uncomfortable pair of the DW variants. I’m not sure if I’ll get to wear these, maybe for a very smoky eye or a photoshoot. These are definitely the most dramatic pair that I own! EDIT (12/01/2017) to compare other styles with the DWs: Wispies - I feel like the lashes themselves are a bit longer in general, and the longest point is towards the center as opposed to the outer corners like the DWs are. Another one of my favorites! 113 - A much longer style than the original DWs. Definitely for those who have a LOT of lid space. These are the same cut as the DWs but just much longer. These didn't work out for me. 120 - Lashes are around the same length as the DWs, if not a bit shorter. But IMO they look more unnatural because the ends of the lashes seem to be cut more evenly than the DWs. Also doesn't &quot;criss-cross&quot; as much as the DWs. Kiss 11 - Very similar style but with a super effing fragile band! I messed these up when taking them out of the package each time. Don't get why these are so popular TBH. Salon Perfect Demi Wispies - As far as I can tell, these are the exact same as the Ardell Demi Wispies. However, the cardboard box that it comes with can bend the lashes. Just something to keep in mind! If you’re new to lashes, definitely give the Demi Wispies a shot. Hell, even if you’re a seasoned falsies wearer, try these if you haven’t already!

As I've gotten older (47) I've noticed my hair, eyebrows and now eyelashes have gotten thinner and mascaras just don't seem to give me the extra length and volume they used to.. So I decided to give false eyelashes a try, to my satisfaction and surprise I'm very pleased with the results so far ???? I've only tried the Ardell Demi wispies and also the Ardell accent 318 wispies, I use kiss I envy glue to apply them and this is now a regular practice in my beauty routine, the wispies give a very natural look just like my real lashes but a step up on the length, volume and color.. I always blend them in with mascara (MaryKay Lash Intensity) or Too Faced Better Than False) and it comes out perfect every time also use Urban Decay Naked Basics 2 eyeshadow palette, this look turns back the clock as that's what I'm after these days! I really love these lashes and would recommend to anyone over 40 give them a try if you're having problems with mascaras not doing their job! They are also easy to apply and reasonably priced, I buy mine from eBay and that seems a bit cheaper and you can get multi packs ????????????

My all time favourite lashes. Affordable pricing and good quality . It fits my lashline perfectly and i do not have to shorten it. same goes to the other ardell lashes! COMFORTABLE TO USE TOO. xoxo

I was never into false lashes because my own we're always long and thick ...until I hit 40. No one tells you that your lashes will thin right out :( I started buying other brands , just searching for lashes of any kind ! Something to help mask my sparse lashes. I hit gold when I found these. They are perfect. Great look without being ' over the top' and super comfortable. Trust me, not all lashes are. Plus they are easy to get on. Really flexible. You can't go wrong with these.

I have these in the Studio Effects version, which is where a few individual lashes were added to the Demi Wispies on the end to give a slightly more dramatic look. However, there isn't a spot for it and I'm not sure it matters too much because they still are demi wispies so I can put my thoughts here. But if you're at the store and unsure which to choose, I say go for the Studio Effects. It's slight, but really pretty. Some of the images online make it look super full on the tail ends, and I find it's not THAT dramatic, but it's still something that kinda bumps them up from regular. These are probably my favorite lashes. I don't wear lashes too often, but I've tried a few that I thought would look good and it's never quite what I want once they're on. I was always hearing good things about &quot;wispies&quot; so I got them when I saw the SE. I also bought the double up regular wispies but haven't tried those yet. These look the most natural and when I say that, like everyone else, they aren't &quot;natural&quot; but they aren't bulked up and &quot;fake lashes&quot; looking either. They have a clear band instead of a thick black base and flex well. Mine still pop off my inner corner because I suck at appling them but they are far more comfortable with the thin band than the 'dramatic' and stiff type of lashes (which, now, I can't imagine using again, uuugghh). Pretty boring review but def another vote yes from me. And try the SE ;)