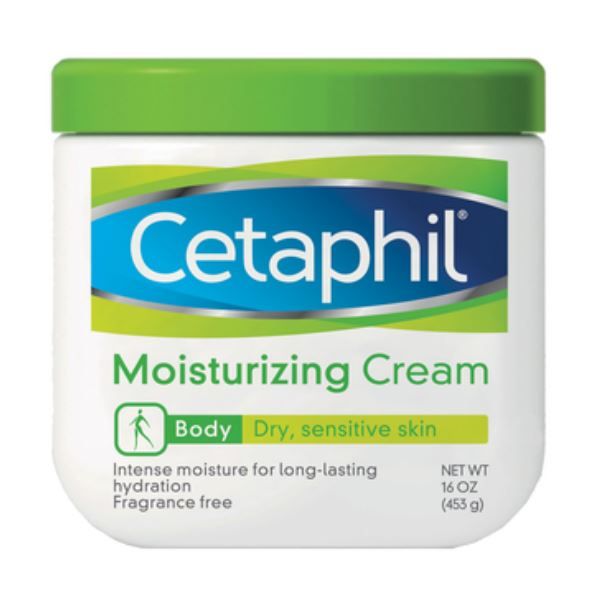 Yes! Good, basic, moisturizer. Sinks in well, no discernible scent, feels like a good non-fussy cream that does what it's supposed to do. No frills, just works nicely! They come in a few different packaging sizes as well which is handy depending on how much you tend to use. I like it.

I wasn't sure if I should use this on my face but after reading the reviews I took the chance. Didn't make me break out or greasy...thumbs up

I brought up, that it was very hard for me personally to choose a suitable cream, as most of them gave my skin red patches , and I have very dehydrated skin. and after trying this brand I was very surprised that my skin took it very well. no redness, skin looked moist and comfortable. It hydrates well and soothes the skin, also big pro that is not scented! Before night I mix the gentle cleanser with coconut oil and my skin looks amazing and feels like a baby's bottom.

Zero complaints - I've used this moisturiser for a good five years now (changed from the Kiehl's one!) Keeps my sensitive/dry skin nice and soft. Love how it's not scented. Sinks into my skin and works well as a primer for any make up that I apply. I get it in the tube so I'm not having to dip my fingers into the tub. Pretty much my HG moisturiser!

King of all moisturizers. The best moisturizer. I like Aveeno products too but since using this I now stopped. I look amazing. I don’t need makeup at all. I won’t even look at another moisturizer. I believe the Clinique cream in a tub not lotion that’s yellow is very similar to this but this is still the king. Has four important parts of a moisturizer. I pretty much look like a goddess now. Update: itchy skin!!! I’ll stick to Aveeno or Clinique. It was nice for a few days, back to my baby Aveeno. I just put it on and now I can go back to looking good again, my bf said I don’t look red anymore lol. I should have never strayed from Aveeno or Clinique bc they are the products that got rid of my psoriasis and eczema. Vanicream is good too but Aveeno and Clinique are still my faves. Update Again: HG! I will always love cetaphil products lol. They just have the right ingredients. I began using this with a wash cloth and cleanser and now my problems went BYE BYE. I wasn't properly cleansing, that's why I got itchy skin, I blamed it on my favorite moisturizer of all time, that actually moisturizes. If you don't find this enough, all you need to do is get a tub of eucerin that says original healing. I'm pretty sure your dry skin will vanish. It's super heavy duty, I dont use it bc I don't like looking like grease face at night, but if you don't mind that get it. This one is the perfect balance of oils and lipids. love it.

https://youtu.be/ksOck7pY7Zs I’ve made a review video about the Cetaphil moisturizing cream because it looks like a basic face moisturizer and it honestly is so simple (packaging, ingredients, no fragrance) that I thought, I had to give it a go. Sometimes the simple products are the best products to use. I tested the moisturizer on myself and on my husband (because he has sensitive skin) for some time to have an opinion about it and to create this video for you. I hope that this video will help you to make the decision, if you should buy it or not.

My holy grail moisturizer. I have been using this product for more than 2 years now and cannot find a better product. I have dry/sensitive skin and this cream always gives my skin a large glass of water. It makes my skin look plump and prepped for my makeup application. It's affordable and does not clog pores.

This is a fantastic cream. I've only been using this for a month but after hearing rave reviews for years, I decided to give my usual Nivea creme a break and give this one a shot. Right off the bat, this is an amazing makeup primer. Nivea is so greasy, I don't dare use it during the day. I have combo-dry skin in the winter and I am definitely acne prone - so far, no breakouts. This product has no scent, which is a definite plus, and it sinks right in. At night I mix this with a few drops of argan oil and wake up to baby soft, supple skin. I am also a free lance makeup artist and this is my staple for prepping the skin, clients love it too! Costco has gigantic 20oz sizes of this, when you see it on sale, I suggest you snag it! I will probably not go back to Nivea anytime soon and give this one a good run as this is just what my skin needs in the late fall/winter months here in the harsh Canadian climate. I say to anyone out there on the fence about this product, give it a go. Worst case? If it doesn't work out as a face cream for you, it's a heavenly body cream. I just wish they still sold this cream in the tube. Other than that, definite re-purchase. Use this in conjunction with the Cetaphil Gentle Skin Cleanser, it's a dream come true for dehydrated, dry and sensitive skin. :)

This is simply put the best body moisturizer on the market that I've found in all my years. And I'm even happier with it now that they got rid of parabens. Though I will say, as they don't seem to have added any other preservatives (and this jar clearly seems to need something, since the product has plenty of exposure to air and potential germs in this packaging) and they don't claim to be paraben-free, part of me wonders if it really is paraben-free / what gives now that they're gone. In any case, I started using this after it was recommended to me by a dermatologist for dry skin issues, and since then, I've consistently gotten tons of comments on how soft my skin is. In fact, all of my family and ex boyfriends and many of their family members now use this too, as this simply works better than any other and WITHOUT CLOGGING PORES or causing body acne/bumps. It's also fragrance free. I really cannot highly recommend enough for BODY use. For face use, it does seem to break me out, so I sometimes use around the eyes but that's it. The only thing that would make this better is if it were lower on EWG's scale (gets a 3-4 due to ingredients like Benzyl Alcohol), but I'm not going to deduct a lippie for that, as that isn't terrible and there really isn't anything else lower on the scale that I have ever found that I think is better as far as moisturization without body acne. TIP: As with any moisturizer, ALWAYS use on slightly damp skin to lock in moisture. You miss half the benefit of rich moisturizers like this if you don't do that. I always use right after my shower, after toweling off very lightly. Note on old vs new formula: Partly because of this product's EWG rating, I've been trying to go more natural and use various oils (jojoba, or sunflower mixed with a bit of squalane) more often and only use this once or twice a week these days (may use more in winter), so for now I can't say I've noticed a significant difference between the old formula and new. I think I noticed a bit of a difference on first impression, but not enough to even remember now - and I'll take the difference if it really does mean no parabens, which would have caused me to give up on this great product altogether. I do think maybe the old formula might have been better in terms of not clogging facial pores, but I can't say for sure. This one does say "Body" only on the front, while the old one said "Face and Body." Once I start using more often in cooler weather, if I feel like it works differently than it used to, I will update my review.