Advanced Snail 92 All in One Cream 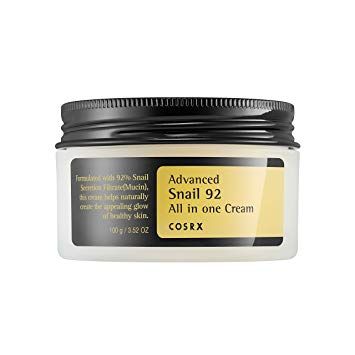 13 reviews
62%would repurchase
2.8/5package quality
price range
Write Review
$21.00 on iHerb
Shop Now
*3 other buying options
Buy from YesStyle for $22.90 Buy from Ulta Beauty for $24.00 Buy from Dermstore for $24.00
More reviews, photos and discussions for COSRX

The Cosrx Advanced Snail 92 All In One Cream is my go-to whenever I have any skin issues, and even when I don't have any issues.  The Snail 92 All In One Cream really shines when skin is irritated, dry, or broken out.  If you deal with acne and breakouts I suggest giving the Cosrx Snail Cream a try- many people have noticed that this cream has helped heal, prevent, and treat breakouts due to the mucin's natural makeup of glycolic acid. Snail Mucin is naturally comprised of glycolic acid, and enzymes which naturally heals skin, treats and prevents breakouts.  The Snail 92 All In One Cream and the Snail Essence from Cosrx are two products which I frequently use in my evening routine.  If you have any type of skin issue, whether it is acne, dry skin, or even fine lines and wrinkles I suggest giving the Cosrx All In One Cream a try- you might be surprised how much of a difference snail mucin can make with so many skin issues.  During the long, cold, dry, Minnesota Winter this cream allows me to wake up to hydrated skin, no matter the temperature outside.  The snail cream also seems to create a nice barrier to prevent moisture loss, which is why this works so well as the last step in my routine.  The Cosrx Snail Cream is made of 92% Snail Mucin, which is a high percentage.  I also love that the rest of the formula is fragrance and denatured alcohol free.  I've tried several snail creams and this is the most soothing, hydrating, and calming as they come.  I've also found that this works so well as the last step of my evening routine, but it is a bit messy and gooey so I don't use it in my morning routines.  I've found that Mizon and Benton make snail products that work better in the morning routines.  The only thing I dislike about the Cosrx Advanced Snail 92 All In One Cream is the jar packaging makes a gooey mess!!!!   I haven't found any research to demonstrate that snail mucin degrades with exposure to light and air, so that is good.  I still would like to find a solution to the gooey mess the jar creates.  I guess I can't win with everything, but still, love this cream!  My video review can be seen here: https://youtu.be/ldNh_7fgbOM Cosrx Advanced Snail 92 All In One Cream Full Ingredients List: Snail Secretion Filtrate, Betaine, Caprylic/Capric Triglyceride, Cetearyl Olivate, Sorbitan Olivate, Sodium Hyaluronate, Cetearyl Alcohol, Stearic acid, Arginine, Dimethicone, Carbomer, Panthenol, Allantoin, Sodium Polyacrylate, Xanthan Gum, Ethyl Hexanediol, Adenosine, Phenoxyethanol.

First of all, there are other Cosrx product that I REALLY like. So this is not against the brand. This is going to be a short review as every time I use this product I come to face the fact that this product is slimy. It is slimy and goopy just like its main ingredient, snail mucin and whereas its clean and white and lab produced, its still gooey and slimy and I really do not like using it. Its not super moisturising or tightening and I simply have not found a place for it in my routine that I would not already have another, better product for. So its a no from me, another well I tried it out moment.

Love this amazing little jar of snail goo. I've been using it for two months now. It's incredibly soothing and it's been so good for my hormonal acne. Even with a gentle, consistent skincare routine and a strict diet, my period always brings a couple of those annoying pimples that never come to a head, and using this cream at night calms them down and shrinks them into invisibility faster than anything else I've ever tried. (And I've tried a lot of things: benzoyl peroxide, niacinamide, panthenol, rosehip oil, various AHAs and BHAs, prescription clindamycin lotion, going fatty alcohol free, going silicone free, going fragrance free, changing pillowcases and wiping down my phone with alcohol daily, blah blah blah.) COSRX claims this is an "all in one cream." That might be true for people with oily skin, but for me it's not particularly moisturizing so I use it more like a serum. After applying I wait for it to dry down a bit and top it off with my normal moisturizer. When I wake up in the morning my skin is soft, smooth, and most of all calm and even. I am officially a snail mucin convert.

I've been on a quest to find the perfect moisturizer for sensitive, oily, dehydration and clog-prone skin and thought this product might fit the bill. It came so very close to being exactly what I needed. Unfortunately, I didn't find it even slightly moisturizing and the initial anti-inflammatory effect faded before long, leaving a tight, stinging sensation in its place. My face went from ahhhh to ouch in a short span of time. So disappointing. I did wake up with glowing, plumper looking skin the following morning, so I have to give credit where credit is due. I wish I could say Cosrx snailed it with this cream, but I'm afraid I found it less than subslime.

I've bought this product 2 times and im about to repurchase another jar. Not a fan of the packaging wish it was a pump. This cream is gel like in consistency very watery and goopy. Background info- I have sensitive reactive skin- everything clogs my pores (UGH) but this cream doesnt. It calms my skin after my P50 toner. It is moisturizing but my skin can suck it up throughout the day. its not the PERFECT moisturizer I am looking for but it works. I use this during the warmer months - during the winter this was too light. It works well with SPF products and I appreciate that. It also works well under makeup.

I bought this product out of curiosity. I already had a snail cream I really liked (Benton) and I generally try to avoid tub packaging. It is a very light moisturiser and I find I become quite oily because of this.. It helps with redness and where it really excels is after sun care! When I went on holiday and got burnt, I applied it to those areas and it would heal them in 1 or 2 nights. I wouldn't repurchase because of the packaging; the inner lid doesn't seal properly and product gets between it and the outer lid and it's a bit messy.

This moisturizer was okay. I found this moisturizer too liquid, and a little bit hard to absorb. I live in Canada and used this during the winter, and this was not hydrating/thick enough to hold up to the weather here. To me it was a nice, light day moisturizer. Not my HG.

This is a no-frills light hydrating cream (good for those with combo-oily skin, might not be good for those with dry or very dry skin), that hydrates, and not much else (which may or may not be a good thing, depending on your needs - if you have actives like acids or Vit C in your routine, then it's best to keep the other stuff simple). I use this at night, mixed in with a few drops of tamanu oil - the oil gives it a bit of extra oomph, the cream makes it easier to spread the oil and I feel like it helps the oil sink in too. The next morning I wake up with more supple skin. I just purchased my second tub after finishing my first, something I didnt think I would do since it is a bit of a boring cream, but one night I used my tamanu oil combo with another cream and the next day my face felt tight the whole day so back to the snail cream it is. A tub of this lasts about 3-4 months with nightly use. The only thing that I really dont like is that it is in a tub! Why a tub??

I started using this in the middle of a really bad allergic reaction to a Sunscreen. It was a perioral dermatitis. Basically painful acne bumps along my jawline, mouth and folds of my nose. At one time I had nearly 20 active breakouts. It was horrible. I have generally clear skin with pimples here and there during that time of the month, but that episode was massive. I had to take medication for it. My face was irritated, and red and painful. And I didnt know what to heal it with, So i resorted in using this only on the affected areas. To some extent I feel it helps dry out the pimples, but overall it just helps with calming the affected areas, soothes it and drying out the pimples. I recovered less than one week with day and night use of this. This isnt meant to be moisturizing but it sure helps heal the damaged wounded skin. So I have been resorting to this for skin healing s.o.s cream as opposed to a moisturizer. Speeds up the healing process really really well.

Hate to bring the rating down, but... PROS: It makes my skin seriously softer, like it's a different effect from smoother or more moisturized or what silicones feel like on top, it just gives my skin a softness that I don't normally experience. It also absorbs quickly and COSRX gives you a decent amount. CONS: This is so not moisturizing, I can tell it's softening my skin but at the same time it's dry and I know it's not giving it all that it needs. The first time I used this, my face had a bit of that feeling when you wear a mask and it dries and you become aware of your skin moving whenever you talk or move your face muscles, no joke. I couldn't stand it after 15 minutes and had to put another moisturizer on top to remedy it. That's how bad it was. Second use, same exact thing. My skin is better with it now after using it some more times, but really, it's a pretty light moisturizer. I know that Korean Skincare loves to layer and has all these steps, and I guess that makes sense why this is so light - well you can't incorporate a really emollient cream when there's still other layers to go on top, but at the same time, I don't want to be punished for not layering. Also, I hate the little tab in the lid that comes with it, its' at such a weird angle. I also hate having to order from Korea and wait like nearly two weeks for my package. OVERALL: Oh, I'm disappointed. I think their Snail 96 essence was actually more moisturizing, and the sample of that blew my mind. This, not at all. I was going to try more COSRX stuff before trying The Ordinary, but I'm thinking about just jumping ship early.