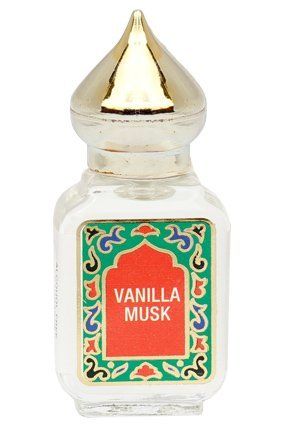 First, I tried to order from the website but all I could seem to find is their perfume bottles listed. I ordered from eBay and received one that is an oil with a rollerball but the top is not pointed so I doubt it is the genuine product. However, it has a great straight-up vanilla fragrance and is pretty lasting. I will keep looking for the real thing. If anyone has a source, please let me know.

This little minaret-topped bottle has been the most wonderful surprise -- I'm on my third bottle now! I've tried many, many vanilla perfume oils. Most either smell sickly sweet, or they fade within 10 minutes of application. Vanilla Musk by Nemat is my new staple because it doesn't have either of those problems! It's a buttery musky vanilla. The musk is warm and lends a depth to the fragrance so it doesn't veer into candy territory. When I apply the oil to my pulse points it's very faint, but as my body warms the scent blooms on my skin. It lasts for hours too! Even when I think the perfume is long gone I'll hug a friend and they'll breathe in and say, &quot;You and your vanilla...&quot; Of all my vanilla perfume oils, this one has garnered the most compliments. I am always reaching into my bag to show others what the bottle looks like so they can pick it up for themselves! This little powerhouse is all of $13 AND it's vegan, Leaping Bunny and PETA certified too!

I'm on my second bottle of this and I just wanted to throw out there that the roller ball one is legit. It comes in the Minarette bottle and the roll on. This is one of my favorite vanilla musks out there. The vanilla isn't foodie its a lovely warm vanilla and the musk is perfect! Not super sweet but cuddly for sure. I adore musks and I collect them. I noticed as this aged it got a touch amber coloured which let's you know a good amount of vanilla is in there. I find in warm weather this really projects and I need much less than during the cooler months. Though you can smell it very well even in cooler weather which is excellent. I have a few other Nemat scents but this one is my favorite. Plus the price is super reasonable for 10mls. Longevity is excellent and sillage can be huge if you wear too much. If you like musks with vanilla or musk in general I recommend this. For me it does not disappoint.:)

I love this! It's a caramelly, sweet vanilla musk. Lasts over 6 hours with just a dab. Not too loud but others can definitely smell it. Paid about $9 including shipping for a roll-on oil (my WF doesn't sell this line and that seems to be where most people find it). If I had to pick, I would say it's close to L'Aromarine Vanille but with more caramel.

First off, I LOVE Nemat for having such a variety of interesting scents at affordable prices. Amber and Musk Amber in particular are amazing, and when I wear them I get lots of compliments. My feelings about Vanilla Musk do not in any way tinge my feelings about this company in general. That said, this particular scent was not at all what I was expecting. It reminds me of maybe what a cheap, cupcake-scented body spray from the drugstore might smell like. It is very sweet, and I really don't get anything resembling musk from it. It's sort of artificial-smelling, very desserty, very simple. When I first applied it and got a whiff of that saccharine, synthetic cupcake smell, I desperately hoped it would morph into something closer to what I would expect would be described as &quot;Vanilla Musk&quot;, but it pretty much stays the same throughout. Part of what I love about fragrance oils is this organic quality they tend to have - like you're not necessarily wearing perfume, but you may just naturally smell that way. Vanilla Musk doesn't share that characteristic, which is a bummer. However, this doesn't smell *bad* per se, and I know some people are really into sweet or dessert scents. If you are among these people, you might enjoy this. But otherwise, do yourself a favor and try another one of Nemat's fragrances. There are a lot of good ones worth exploring. I feel compelled to edit this review in 2016 and add 2 more lippies. I'm not sure if this fragrance has aged really well over the years I've had it, if it grew on me, or if my preferences have changed, but I'm starting to really like it and find myself putting it on even when I'm not leaving the house and feel like putting on a soft and low key fragrance. The scent is not overly sweet after the drydown. I think a previous reviewer referred to it as &quot;buttery&quot;, and I think that hits the nail on the head. I've been enjoying layering it with Alkemia's Divine Goddess Musk to bring out the musk a bit more. Once or twice I've layered it with Nemat's White Amber and it was an incredible fragrance - I could not stop sniffing my wrists. Perhaps Nemat should consider selling a Vanilla Musk Amber as an entirely new fragrance - it was that awesome. I'm still not sure I'd repurchase this one, but as far as sweet and desserty fragrances go, it's quite nice.

The initial application and drydown are a beautiful buttery vanilla. The inbetween is terrible. It's like overwhelming myrh and sandalwood. It was the same with the amber oil. Not for me.

I cannot get enough of this oil.. It smells so amazing! I find myself smelling my wrists all day and I have and will be re purchasing this.. I put this oil on one wrist and nemat's Amber on my other wrist,rub them together and to top it off, I spritz one spray of D&amp;G The one on my neck and Im good for the entire day.... Seriously incredible!!

Wow, you all were not kidding!! This is wonderful! Very much like Vanilla Bean Noel. Long lasting and inexpensive. I bought from Amazon and the customer service was excellent. Absolutely delicious!!

Oooo very smooth,buttery,delicate vanilla goodness. What makes this even better is mixing a drop or 2 of Jasmine oil in with it. OMG it smells soooooo good~I used the Jasmine CO2 from Eden Botanicals.

My good Lord. I'm very surprised at how well a little $12 bottle of &quot;oil&quot; would work for me. I am a lover of sweet, sexy scents. I recently ran out of my all-time favorite perfume Alien by Thierry Mugler and was looking for something budget-friendly (poor college student). I dabbed this on my wrists at whole foods and kept walking around. I kept thinking that they were baking goods because I kept smelling an amazing vanilla scent. It was actually THIS. One dab of oil and the smell was intoxicating. Needless to say I bought the bottle. *Edit* AND today I dabbed the oil lightly on my wrists and behind my ears. Two co-workers now have said that the entire room smells like &quot;yummy baked goods.&quot; Another commented that he smelled &quot;flowery cookies.&quot; I love that i'm able to wear a vanilla scent without it being too strong or too annoying. I've had no allergy issues with this and am comfortable with wearing it in the office. With the lasting power and the price, I think it's a win-win for me.