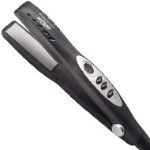 I read the good reviews on here and thought I would give it a try. I have always used a chi flat iron on dry hair and have been pretty happy with it but saw that this could cut down on my drying time. Ugh! This fried my hair! I even used a great hear protectant. It made my hair like straw and even stripped the color! I have never had this kind of awful result. Using heat like this on wet hair is a recipe for disaster if you already have damaged hair. Can't wait to return this! Not for me. I'll stick with a hair dryer and my chi flat iron.

I had the chance to use the newer version of this straightener, the 2” version with soy hydro complex and I’ve never been more satisfied. My hair is not thick but it’s not thin, it is curly/wavy and frizzy. I hate straightening my hair because I never get the results I want. When I straighten it I have to keep straightening it because it gets frizzy quickly because I get hot. Everything changed with this hair straightener though. I recommend the “beyond the zone” heat protectant, it smells great and leaves hair feeling softer and healthier when you use heat. Back to the point though, the Remington wet 2 straight left no frizz at all, left my hair silky soft and super straight. A result I’ve never gotten. BTW I used this on my dry hair not wet hair, i like to straighten my hair when it’s completely dry. If it wasn’t for this straightener I would’ve paid $300-400 for a keratin treatment or Brazilian blowout to have my hair less frizzy. I

Bought this 7 years ago and still works fast and efficiently on my very curly hair.

I am very impressed!!! I bought this at Target for like $40 a little over 5 years ago. I still use it to this day. I've gone through phases of hair styling - I often go through periods where I straighten it every day for 6 months, and then stop using it all together for a year until my next straightening phase. This makes it hard for me to estimate how much wear and tear it's taken. But I definitely remember a lot of time I've spent using this. I have fine wavy hair but I have A TON of hair. This makes it very hard to straighten my wavy mane. This flat iron is AMAZING. I know it's bad to use a flat iron at the highest temperature, but I always have this on the highest setting because it saves me so much time. It's also a great size since it's slightly wider than other flat irons, so I can work in larger sections thus saving time. Unlike other flat irons, this straightness lasts all day, until I wash my hair. The only flaw with this is that the wet 2 straight part isn't entirely true. I only use this on slightly damp hair but would not recommend using it on wet hair. It simply will not straighten your hair and leave you with a mess of frizz.

I'd never heard of a flat iron for wet hair before but liked the concept, so I did some research (Google) and found that the Remington Wet 2 Straight had the most positive reviews. It also happened to be the least expensive of wet irons (I ordered the regular 2&quot; iron without the Soya Hydra Complex, from amazon.ca). After getting tape-in extensions I now have thick wavy hair but I prefer to wear it straight and sleek. The iron has a setting from 0 to 30: 0 to 9 is for dry hair, 10+ is for damp hair depending on the thickness/dampness. The instructions are to use the iron on damp but not soaking wet hair. For my purposes, I find the iron works best if I air dry my hair until it's about 90% dry, then I use setting 15 in combination with my new HG product, TRESemme Damage Recovery Oil Elixir. It takes about 3 passes over an approximate 1&quot; section of my hair to straighten/dry and it's not bone dry, just drier and much straighter. Steam does emit from the iron and makes a hissing sound when I run it down the sections but it's just steam and my ends are not fried. It takes about 15 minutes to do my whole head. By the time I've finished my last section, I turn the setting down to 10 and do a quick once-over. Because I usually wash my hair at night just before going to bed, I find after waking that my hair has a few dents so I set the Wet 2 Straight on 8, do a quick roots touch up and my whole head looks as good as the night before. I'm glad I found this iron and worth the reasonable price in my opinion.

I got this straightener for my birthday. I always wanted my hair to be straight and frizz free, I have thick and curly hair btw. I used this on my towel dry hair and it did an amazing job. I understand people saying that it burns and fries your hair but that's not the case. It makes that SSSSsssss sound because the water evaporates, the goes out through the holes in the straightener. My hair stays straight as long it my hair doesn't get wet, normally my hair is wavy in about an hour. This straightener is amazing for the price and does an excellent job!

the best straightener i ever used.....i love that it dried my hair and was still straightning it.....i hate having to wait for my hair to dry so this is amazing

I have the wide version of this. It works fine, even does wet hair, which saves me a ton of time. After using this I have silky soft straight hair. I do dislike that it sometimes snags at the end of the plates, have lost some hairs to that. Also the handle gets pretty hot after a short while.