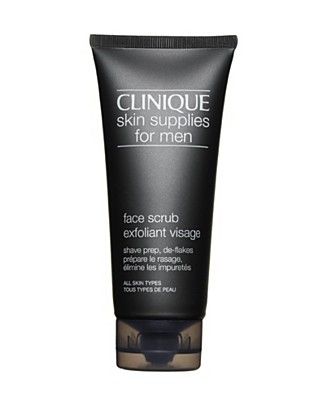 Favorite facial scrub. Not too harsh. Don't let the &quot;men&quot; name dissuade you

Clinique were one of the first companies to make a line geared at men. One of Clinique's strengths is that for the main part they have remained fragrance free which is quite an achievement in the industry. It is a popular line and not without good reason but seems very pedestrian in many ways with boring formulas and packaging with large type face in case a man doesn't know his face wash from his face scrub. Back in the nineties when I used it, it seemed exciting and they released a Turnaround Lotion which was very effective. Then, you also had a series of creams from the women's line which you could use - like Moisture On Call, Moisture On Line and Comfort On Call. All excellent creams. Now the men's line (originally called Skin Supplies For Men) is a pale version of the women's line. It's pretty unisex and men tend to use products from the women's line anyway. Now it seems that the men's line is as boring as the packaging. The pros of the line is that they are simple and fragrance free. But you might find yourself look elsewhere for ones that do a little more for your skin. The three-step system in the men's line is similar to the women's, but the Exfoliating Tonics which are similar to the Clarifying Lotions in the women's line, contain more SD alcohol so I would tread carefully there. The Face Scrub is much grittier than I remember it from memory and unlike the original one (have Clinique tweaked it?) you don't have the option of leaving it on the skin for a minute or two like you used to. This scrub has the consistency of sand and is gritty and much less of a paste than it used to be. The packaging is wasteful as most of the product resides in half the tube. You can certainly feel it working and the skin is left very fresh after rinsing off. But I wouldn't recommend using this everyday as suggested. It's far too strong unless you have very oily skin in which case I would suggest you do not forgo the lotion afterwards. I used Clinique back in the early 90's when I was new to the whole serious skin care approach. Prior to this I had enjoyed vitamin E creams from the local health store (which you sadly cannot find anymore) So this was my first foray into department store brands and when I got past the price I liked the regime although it took me a while to get used to the M Lotion (as it was then called) because it was such a runny and seemingly ineffectual product. Sticking to the regime gave me good skin but I ran into trouble which I now see as simply being products that were too harsh for my skin. Namely the Scruffing Lotion )now the skin tonics). Now I would recommend bypassing all the Clarifying Lotions and Tonics and going for the Mild Clarifying Lotion which is a BHA exfoliant and contains Salicilic Acid and is much gentler primarily because it does not contain SD Alcohol (denatured alcohol). I wouldn't recommend using SD Alcohol on a daily basis. Oh no. Evidently a few of Clinique's products overstimulated my skin and I actually developed a cyst. The Face Scrub is in keeping with the aggressive approach that is still evident in some of Clinique's products. It's a good product but should be handled with care because after a couple of weeks of use (twice a week) it left my skin feeling a bit parched. Clinique is a good brand but choose carefully from their line. Keep their stronger items to a minimum. Pros - fragrance free, simple, effective results fast. Cons - boring formulations, can be harsh, expensive

This is a really good scrub option for men (or women). I find it gritty, but not too rough on skin. Works really well and is non irritating.

The best Facial Scrub by far.

My boyfriend and I live together, I spied this in the shower and yes I'm one of those people who uses things that's not theirs, (just ask my sister lol) and I have to say that this is the best scrub I've used! I love the cool tingly feeling and it makes my face sooo smooth. I'm gonna buy some for myself....and hide it lol.

I have tried a TON of face scrubs, and I never thought to try a mans facial scrub till a clinique rep told me to give it a try. I have fair, oily acne prone skin, that also clogs easily and is flaky! Nightmare skin, I know! But I use this a few times a week and it keeps my skin baby soft! LOVE IT!

Love this, has a nice menthol/minty cooling effect, although sometimes the exfoliator is a little harsh. Would recommend to anyone without sensitive skin.

Amazing product. Fine grains and very soothing with the menthol. My skin feels so smooth and refreshed every time I use this product!

My mom has the exfoliating scrub and my dad has this scrub and I've been using it over the summers when I come home from school. so this review is based on several months of use over several years. Between the two, I like the men's more. It has menthol which leaves my face feeling fresher than the other. Other than that, they are identical to each other. The scrub is harsher than most scrubs, so it should be reserved to using it once a week if you have dryer skin. But if you use a small amount and wash your face thoroughly, I feel like it exfoliates better than most others. It has a thicker consistency but spreads well over the skin. I have sensitive skin and I have yet to break out. I think I'm going to get my own despite the ugly packaging. Clinique's men's line has the most boring packaging ever... I would repurchase when it runs out but I know it lasts forever. Recommended.

this product is unusable, i had a sample of it from the nice clinique lady but i should have known as i prepared it in my hand, it is an overly gritty a bonanza of irritating effects only made worse by the menthol. My skin was already smooth before i used this so i cant comment on its exfoliating effects, but i have to say that this excessively abrasive scrub is only inviting trouble. It has found a use as a hand scrub, perhaps a foot scrub as well., overall scrubs are a dated exfoliation method, i now fully endorse bha and aha products, maybe even PHA.