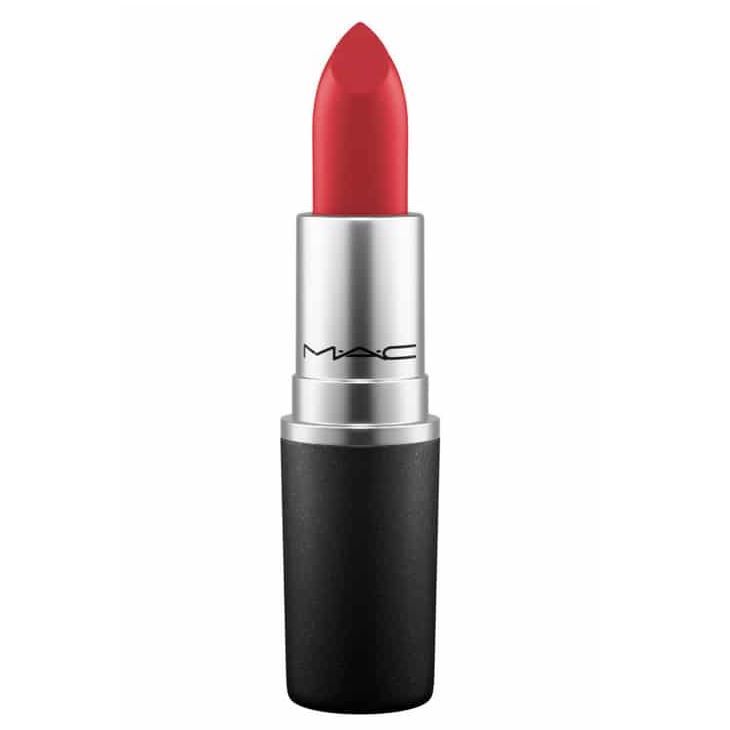 It’s funny how reviewers describe this lipstick as both blue undertones and orange. I guess it depends on whose wearing it. I’m a redhead with pink undertones and this red is perfect for me. I usually look best in orange so I’m going with classic red with slight orange tones, either way it’s just the perfect red.

The search for the perfect red lipstick is over! MAC Russian Red is basically the only red lipstick I wear when in the mood. It's described as a bluish red. To me, it comes off as the ideal, classic mid-toned red that would look good on a variety of skin tones, as it is not too warm, not too cool (I have medium, neutral toned skin). I recently wore it to a wedding, and only felt the need to touch-up once; it has the quality you'd expect from a MAC lipstick. It looks beautiful with minimalist eye makeup or a cat-eye, for a classic retro look. I generally wear a basic lip balm or pink/mauve tone lipstick, but I never hesitate to wear Russian Red when in the mood. It's my go-to red.

I've tried millions of red lipsticks and this one is my favourite. The colour is classic but sophisticated at the same time, it suits everyone. The formula is great. It's matte but definitely not dry and my lips tend to be really dry. It's long-lasting, stays all day, doesn't come off during eating, even greasy foods don't ruin it. I've been using it everyday for over 6 months on full lips and there's still a half of it left. I do recommend it to everyone and will buy it again for sure.

Well, I have to say that I love the color but I don't like how it performs. It doesn't last very long when you eat. But maybe that isn't really the purpose of it, or maybe I am just doing something wrong. Don't know. Wouldn't recommend it if you are new to makeup...

I love the colour very much. The colour (described as bluish red) complements my skin tone and makes my teeth appear whiter - i am east asian with rather fair skin with neutral undertone. The colour stays on for a very long time - need to use makeup remover to remove all traces of it on my lips. The reason why i gave it a 4-star is its texture - it is not hydrating at all and i need to apply a lip balm before applying it. i tried searching for a similar colour / dupe from another brand but no luck! i tried other mac cult favourites as well - ruby woo, chili, lady danger, this one works best for me - not too orangey, not too in-your-face bright, not too dark.

Great gorgeous red color. If you love Mac lipsticks this is a staple for most skin tones. Heard about it on Spotlighthair.com and so glad it was recommended!

Oh, Russian Red, where do we begin? Russian Red is a cult classic among MAC's endless array of lipsticks and it's not hard to imagine why. I would describe the color of Russian Red as being a cooler tone, medium-to-dark, rich red shade. I'll be totally honest- I didn't think I would like this color. MAC's Ruby Woo is my ultimate go-to and by comparison, since Russian Red is a bit darker, I assumed that it would be more subdued, if not dull. Boy, was I wrong! Russian Red actually has a depth that many reds lack. Though it is slightly darker than my beloved Ruby Woo, there isn't any discernable brown in the formula which seems kind of hard to find in reds of a more "brick" variety. It's exactly the color that I had wished NARS Cruella would have been, for instance. There's a reason why it's so popular and that boils down to the fact that Russian Red is a very versatile color that I can see being flattering on a multitude of skin tones. On the downside, Russian Red is NOT the most low maintenance red I've ever encountered - this is coming from someone who is loyal to classic lipstick formulations and only wears red. I know that a lot of people love them and laud them for their longevity, but I'm not a fan of liquid lipsticks, so I'm not making any unfair comparisons here. Although Russian Red is a matte formula, I don't personally find it matte enough. I usually have to blot it down significantly to get rid of the extremely mobile cream texture that it imparts on the lips. Others will find that the softer, more creamy finish of Russian Red will make it more comfortable for them to wear in terms of not drying their lips out. However, I feel like this lipstick is exceptionally prone to bleeding. I could not eat or drink anything the entire time this lipstick is on me and it would still bleed. I find that it particularly wears and bleeds in the outer corners of my lips which is something that I personally can't stand. Would I purchase Russian Red again? Maybe. The color is fantastic but the wear is a little too high maintenance for me.

My first MAC lipstick. I noticed that I don't have a good red lipstick at home. Once picked up a red lipstick by Maybelline but I didn't like it that much. Went to MAC, swatched this on the back of my hand and since then I'm in love with MAC lipsticks. Purchased this, applied this at home. And I couldn't let go of this lipstick til today. Purchased a backup. Formula is good for a matte lipstick, color makes my teeth look whiter and brightens my complexion. But it's best if I wear it with a "flawless" face (foundation, concealer, some blush, mascara and eyeliner). Otherwise it'll not look complete.

https://www.youtube.com/watch?v=pQfJbtFT7Fw Pros: Pigmented, great color Universally flattering red Great consistency Cons: Not many. I suppose it gets on my teeth if I'm not careful, doesn't last as long as a liquid lipstick Overall: 5* - what a classic red that wears very well

I own quite a few different red lipsticks, drugstore and high end. I wear matte red lipstick almost everyday, red is my "nuetral" and MAC Russian Red is the one I feel is most flattering, easiest to wear and on top of that, I get complimented on it the most. I am pale with red hair and blue eyes, but I think this color and formulation would work on almost anyone! I usually apply a clear balm, then sometimes use MAC Cherry lipliner, then Russian Red. Sometimes I apply it with a lipbrush if I want a more sheer application. I own MAC Ruby Woo as well, but I much prefer Russian Red, theres something too 'bright' about Ruby Woo that makes it look out of place on me, where as Russian Red looks very vintage and deep, but not too dark, not too bright. It looks perfect and it is my HG lipstick.