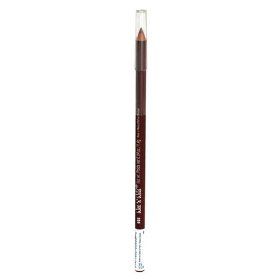 I bought the Brandywine lip liner way back in either 2003 or 2004 and the color has definitely changed. It went from being a MAC Spice lip liner dupe to the color that it is now. It is also very waxy as well.

I have an original stick of 666 and it is definitely not the same color. The original is like a perfect dark pink that shades a bit nude with a sexy shimmer. It’s also soft and even on applications it has to be 10 years old at least. This ones ok but I wouldn’t have ordered if I realized it’s not my original color. I wonder if w and w makes a color closer to the original

I bought this after seeing many positive reviews. I find it to be below average- mines in the trash after trying it for a few weeks... its got a strange muddy color, and very waxy texture. Yuck.

I have used this lip liner for years. It is a brownish mauve color and it goes with pinks and browns. I wish it wasnt a lip liner i have to sharpen but i guess thats my only complaint. I use it with lip balm, lip gloss, and lip stains. LOVE IT

Hmm. Hmmmmmm. I'm going to go ahead and add my voice to the other reviewers asking, "what the heck happened, Wet n'Wild??" because I have owned this shade before and don't recall it being quite so dark. I also remember it going on a *bit* less patchy. Granted, it has been maybe 8 years since I last used this, and memories are a tricky thing, but yes I do feel something has changed and not necessarily for the better.. For 99 cents you get a whole big ol' mama of a pencil, enough to last you maybe a decade if you're not using it daily. For the price, if you're curious, just pick it up because there is a possibility I just got a less than ideal variation and there could be a heap out there that is rocking peoples' worlds. For me, the color has it's place but it's not one I would turn to everyday. It is a bit dark on me, kind of a reddish wine brown, and I can say it pairs well with Kat Von D's liquid lipstick in Lolita, if that's your thing. It does have a slightly purplish cast that darkens it and makes me feel like it might be a darker version of the older formula others are raving about on here. Was it always this purple? I guess we'll never know. The liner goes on heavily pigmented but the tiniest bit patchy- once again, I remember it being more even than that. WnW pencils can be a bit stiff, but they've never been patchy as far as I can remember. It kind of looks darker at some points than others. I am probably just looking for trouble where others wouldn't notice anything, but I saw what I saw so I have to mention it here. Okay, so maybe not my finest lipliner moment but I wouldn't rule out repurchasing this because it is so affordable and a part of me feels like I owe it to the memory of this liner to give it a second chance. It could've been a fluke, and this liner and I go way back, plus it is literally the only liner I own that pairs well with Lolita (MAC Spice being a bit too light). We shall see..

I also used this in the 90's. I was a poor teenager and every one of my friends used it too. I remember it being a nude or dark mauve. Recently I've found it and bought a couple although now it looks more of a purple color. I don't know if I'm just remembering it wrong or if they changed the color. Its still a great deal though, a huge pencil for $1 so its worth a try. Its not a bad color, its just a bit dark. Also, for those of you who can't find it in stores I found it in Walmart but the packaging is different and the color is brandywine.

I have been using this lip liner since the 1990s. It is the best nude lip line ever. I believe it was the actress Heather Locklear who said it was her "go to" lip liner and I bought it back then for 59 cents.....and never stopped using it. It looks great with a matching lipstick or just on its own. It has no sparkle, glitter, it doesn't migrate up your lip; it's just perfect. All that being said, I'm concerned that people are writing in that they feel the formula and color have changed. I still have a few left over so I'm good for a spell but, how can we find out if they've altered something like texture or color? I know that the original owner of Wet 'n Wild sold the company and don't know how to get in touch with them anymore. Therefore, if I need a new one, I'd be afraid to buy one online as at least in a store, I'd be able to bring mine along to match it up. Problem is though, I don't see it sold in any stores anymore. Look forward to hearing input from others on Makeup Alley.

This is a great lip liner. I've reached for this one a lot. I use it with a lot of different lipsticks, lip balms, and lip glosses and it works out with them. I'm a big fan of the color and also it's a perfect fall lip liner or if you want to deepen the outer edges of your lips. I take it and line my lips and then blend it with my finger, then I apply a lipstick or a gloss. If you wear it by itself though it can be drying and I have dry lips. If worn alone I would suggest wearing it with a balm or a gloss. I love that you can go very dark or sheer with it. My favorite combination with it is ELF Tea Rose, its the perfect fall nude look. I like that it's not metallic it looks like it would be but when applied it's a satin finish which is why it works with matte lipsticks. It's also great for the price. It makes me want to try more Wet n Wild lip liners. Overall I think its a great product.

It's a nice redish Brown. It was only .99 cents so I can't complain. It looks nice with nude eye with wings with a nice pink gloss ontop and with a black smokey eye to give it the 90's look.

I feel like maybe this color was reformulated or something, because I definitely am not getting a pinky-nude shade like other older reviews mention. I found mine recently at Dollar Tree, and DT is known for selling discontinued/repackaged older products so I'm wondering if the shade has changed. All that aside, I'll review the lip liner. It's only 99cents and even cheaper on sale. It's a really long pencil and will probably last forever. It feels like most lip liners, not super creamy but not rock hard either. Applies fairly easy and is pigmented. I have light-medium skin with strong yellow/olive undertones and this lip liner is very brown on me. I would call it maybe a wine-brown. It does have a touch of shimmer to it which isn't super noticeable or anything. It comes off very 90s matte brown in my opinion, and apparently that's really popular again right now. But on me, brown doesn't work too well. At first, I really didn't like it and I couldn't understand why so many women raved about it. It was just straight up rusty brown on me and not particularly flattering. But it's kind of growing on me in a way and I'm figuring out how to make it work. It looks better on me when I apply it lightly (instead of applying it thickly to make it super pigmented) and dab some lip balm on top. Looks more natural that way. The best way to wear it, for me, is with NYC Rivington Rose lip shine on top. That combination is gorgeous, you must try it! It's only $3 to get both lip products, and it's the perfect rosy-brown lip color for every day.