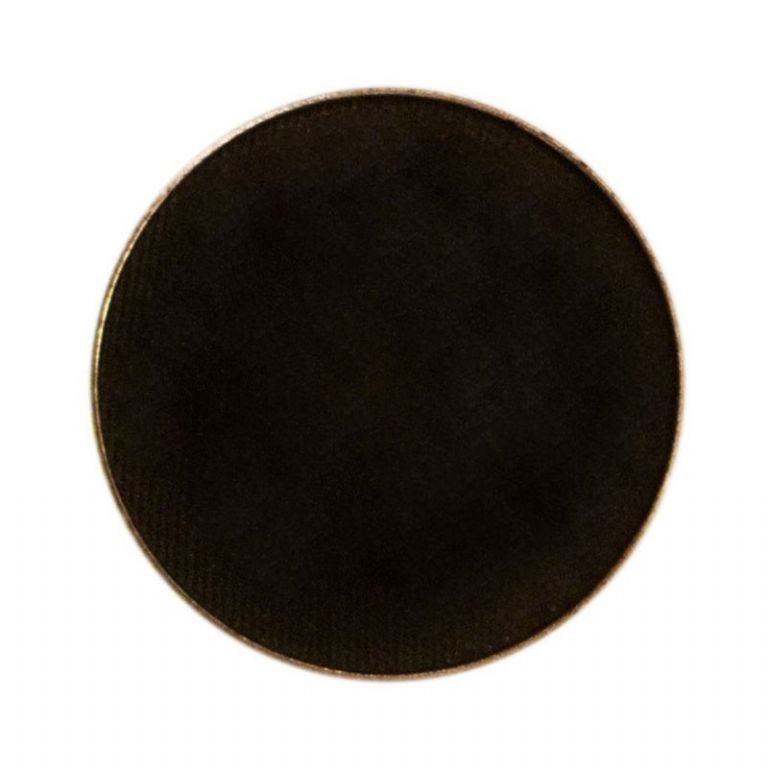 I agree with people saying that it's extremely pigmented, but do you really want your BLACK eyeshadow to be so pigmented? I can't work with it: it stains my brushes, the fallout puts me in danger of ruining my makeup, and it's so hard to build it up - literally a tiny amount is pitch black. It's extremely hard to work with. I've tried to salvage it by using this as a liner, but the fallout got in my eyes and it hurt like hell. This is one eyeshadow where *less* pigmentation would've worked so much better. This is really not beginner-friendly.

This transfers on me badly. Yes it is very black but it never sets and just gets black powder all over my eye. If I use it to line my lid, it ends up on my lower waterline. And as the day goes on it seeps into the inner corner of my eye and just looks horrible. The best black IMO is the one in the KVD shade and light palette. I also prefer UD blackout to this and UD crave as well. I really like MUG but I can't believe im the only one that has an insane issue of transferring with this shadow

This eyeshadow has a good pigment. It is very black. The blackest eye shadow I have seen is the one from the Naked 2 palette (Blackout.) The Makeup Geek one has a good price, is not chalky, and stays all day. You always get the right amount in the applicator and you do not need to scrape hard to get product on your brush. Good for smoky eye, a thick line or a thin one. I use the Mac 263 Small Angle Brush with this and my line looks gorgeous.

I was hesitant to purchase this as I have so many black shadows (from palettes and individual pans)and thought this would be a redundant item to add to my collection However, after reading so many great reviews about it I caved in and added to cart. Man am I impressed! This is THE darkest black shadow i've tried to date! It's buttery, not chalky at all, easily blendable without going muddy and losing pigmentation like some dark eyeshadows. I hate when black shadows loose their color after some slight blending.This shadow does not do that!! Overall, I'm glad I purchased this shadow and is my fave black shadow to use.MUG shadows are the bombay period.

Truly the blackest eye shadow on the market! All of their products are of such high quality; it's the only brand of eye shadow I use these days!

Whoa. *Update* I can not get this stuff to not smudge or have fallout. Went back to WetNWild I have been using Wet N Wild's Black Panther almost everyday for about 6 months now and I thought it was black black. Soon as I swiped this with my finger and looked at it... I renamed it to Whoa! I have a video and pictures of this product and as a comparison to Panther. You can easily tell them apart especially when on the finger tips side to side. I have been using eyeliners everyday for years and years to define my eyes, but in the last few years I have moved to using dark shadows for a bold, but softer look. With this shadow you can use it straight lined or blend it out for a buffed look. You can totally black it out... thin line or thick line. Wet or dry. Although you see some glitter in the pan it doesn't incorporate it to the eye... thankfully for me. This eyeshadow was more dry/more stiff than Panther, without being chalky or powdery. It was easier to use for me because it was thick and it seems like I get just the right amount on my brush or applicator. Right now I am using Elf's small Concealer brush with this to define or line my eyes and it works perfectly. I dampen the brush, sweep across Corrupt, clean off slightly, then apply. I only have to do this twice, not over and over! I start at my outer V, working inward and sometimes I don't even sweep it into the pan twice. I also have a pointy eyeshadow applicator from Rimmel quad- which I can't use their eyeshadows because of irritation, but this applicator works great for using eyeshadow to define! I took off a lippie because I wish this came in a box instead of an envelope, and I wish they would clearly state that these pans can fit into a MAC palette (mine is a 4 pan), but do not stay in them. I have been told they are magnetic and do stay in Z-Palettes which I will be picking up. I ordered this on an Wednesday morning &amp; received it on Monday... 4 business, not so bad :) It was sent Priority Mail- 3 Days, maybe the day I ordered it didn't count? Great shipping for a small or big company! I will be ordering MOAR! You know how we do. We haul! :) Only $5.99 for great eyeshadows... yes... yes... I will call this a collection &amp; not a hoard! Thank you MUA for letting us post a video! <object onclick="ga('send', {hitType: 'event',eventCategory: 'Ajax Interaction',eventAction: 'PlayVideo',eventLabel: ''});" width="360" height="320"><param name="movie" value="https://www.youtube.com/v/am8cuY4uLjU"><param name="wmode" value="transparent"><embed src="https://www.youtube.com/v/am8cuY4uLjU" type="application/x-shockwave-flash" wmode="transparent" width="360" height="320"></object>

Simply put, this is the blackest eye shadow I have ever used. It's even laughable to compare MAC's Carbon or Black Tied to Corrupt, since those 2 shades need to be built up several times to achieve the rich, intense darkness that Corrupt provides with just ONE swipe. Urban Decay's Blackout is also a worthy contender, but no dice. The first time I used Corrupt, I underestimated its pigmentation and loaded up my brush with far too much and ruined my eye make-up. Until that moment, I had never used such an incredibly pigmented black before. Corrupt needs to be used very sparingly, and in small amounts. Corrupt has silver sparkles in the pan, however, once its applied and blended onto the lid, they disappear (well they do on me). The only downside is that it does have some fall-out - if I plan on using this eyeshadow, I definitely do all of my eye make-up first, then proceed onto my face make-up.

I find this shadow to be average. Wet n Wild's &quot;Panther&quot; is much more pigmented than this shadow and cheaper too! I will not purchase.

Corrupt is not the blackest black, it's Saucebox Black widow, Urban Decay's Blackout is as dark as Corrupt but is matte while Corrupt has a slight sheen to it. I bought a lot of Makeup Geek eye Shadows and all are fails!! These shadows swatch well (not all), they don't wear well and don't blend easy. I will not be purchasing anything from this line again.