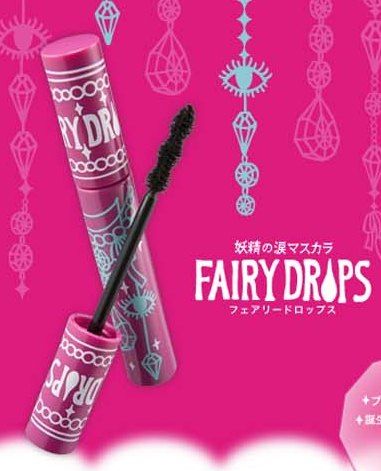 This is not the worst mascara I've used but for the price I expected a lot more. It's neither volumising nor lengthening and to add insult to injury it's not very black. I will continue to use it as a first coat, only because of the price I paid. Very disappointed & will not repurchase.

bought this mascara in hong kong. was relatively cheap. I think Japanese mascaras tend to work better . this mascara really holds up my curls. it does smudge a little but relatively ok compared to others that I have used before. one of my HG drug store mascaras. would repurchase again.

Meh. I gave this three stars. But to clarify...I would not repurchase Fairydrops mascara. The 3 lippies are a thank you gift to Fairydrops for not being a total disaster. I'm pretty sure the brush is the issue here as I am a mega tubing-mascara fanatic. I found the brush to be flimsy and the shape of it impractical for applying this to my lashes. It was so difficult to apply that even if the formula was AMAZING, I still wouldn't bother with it. Which brings me to my next point - the formula is nothing special. Maybe because I've tried so many tubing mascaras I know what to look for, but I do not get the hype. There are some awful tubing mascaras out there, sure, but there are also some wonderful ones. Fairydrops formula is just unworthy of being on either list. It preformed average in every aspect. I would skip this mascara and move along to Blinc if you had to choose one tubing mascara at Sephora.

The Japanese mascara craze prompted me to purchase. It was quite goopey out of the bottle and the curved brushes with the grooves seemed to miss a bit of my lashes when applied. You have to apply the mascara several times to get all of them. End result was thick lashes but it did not hold curl very well. LIKES: ok consistency, cute packaging and idea behind the wand is great if you have lashes already. DISLIKES: expensive for what it is, thick and goopey- product is wasted on the wand and requires several applications to get every lash and I find it too time consuming. Will not repurchase.

Love this mascara!! Let me say that I am no Newbie to mascara. In the last 2 years I have actually been on a mission to find the perfect mascara. I have even owned and used Chanel, Benefit's 'They're Real' mascara as well as other top line cosmetic counter and drug store brands. For Christmas last year I got a gift set of mascara from Sephora that had something like 8 different top brands as well. I love the shape of the brush, which may even be the key to this mascara. It goes on nicely, and not just the few times after you open it, but right until it's finished. No clumping, smudging, flaking or undesirable effects. I just grabbed another one on-line! My very close second choice to this one is L'Oreal's Voluminious in black. Which I was really surprised by. Each time I tried a new mascara I would use the Voluminious on my left eye and the new mascara on my right for comparison. My goal was to find one better than Voluminous, which Fairydrops did. Had this not come in my gift set I doubt I would have ever tried it as the exterior packaging of the container itself looked to hippy-like and not something I would take seriously. So you just need to get over the packaging and embrace this product. March 24, 2015 Update: This product is still by far the best mascara ever! As I'm a make-up junkie, I'm always striving for better and have since tried 10 different mascaras including Better Than Sex Mascara, and this one still beat them all!

I'm quite attracted to the packaging at first and did a lot of researches before purchasing. I've got oily eyelids and quite easy to have smudges for the eyeliners or mascara if I don't use the "right" or waterproof kinds. I've tried many drugstore brands that are waterproof and unfortunately, they all smudge on me. quite embarrassing. my first mascara's a japanese brand called heroine and it never ever smudges on me. this is the second mascara that i've tried and works wonderfully well. I've purchased the waterproof one. Of course though, it's not for those that wants to remove their makeup easily. I normally get the "good" makeup removers to have them removed. not all japanese brands work well though, I've tried the MJ brand and unfortunately smudges on me in an hour or two. yup, not good when you have to hang out with your friends your bf. as for results, this makes my lashes look full and long. i always get compliments and sometimes get asked if i'm wearing falsies. will definitely repurchase. unfortunately, sephora don't have this anymore...but i'll purchase it online from sasa.

This was one of the mascaras in Sephora's Lash Stash a year or so ago. I no longer see it listed on their website, and it's a shame, because I love this mascara. It fans my lashes out beautifully while giving me plump volume and separated length. It's the fanning out effect I get that really makes this mascara stand out to me.

I used to love this mascara because it magically (ok, they are little fibers that attach to the ends of lashed, not magic) lengthens lashes. It can be a little difficult to prevent clumps with this mascara, but it really does create dramatic, long lashes. Recently, however, various drugstore brands have caught on to the fiber trend and created their own versions which are just as good and MUCH cheaper!

firstly, i think i need to set some things straight. there is a difference between the Original Fairy Drops mascara, and the Fairy Drops Scandal Queen mascara. a lot of the reviews seem to be for the FD Scandal Queen mascara, and not the original one, even though the main picture is for the original formula. the original formula comes in a bright pink tube with white and blue artwork. it does not contain any fibres. it can only be found in Asia or online (and is actually inexpensive). actually, it has also been discontinued. the one sold at Sephora is the Scandal Queen version (and is totally overpriced). it comes in a metallic tube with red artwork, and is formulated with fibres. so they are actually not the same. same brand, yes, but not the same formula. that being said, i'm going to talk about the Original Fairy Drops mascara, which, yes, has been discontinued, but i felt i must do its memory some justice. the packaging for the original one says this: "FAIRY DROPS Mascara’s brush is particularly designed. Lumpy brush ensures perfect contact with every lash for volume, curly and no clump eyelash look. Water-proof formula works to resist water, sweat and sebum. Long-lasting wear is guaranteed. " lofty claims, but it lived up to them all. this mascara was my HG (i use past tense, because as i mentioned before, it has sadly been discontinued). i got a tube while i was living in Hong Kong where the climate is hot and humid pretty much the whole year. this mascara thickened, lengthened, and defined my lashes beautifully. all without the use of fibres. it also held my curl and lasted with no smudging or smearing whatsoever. it was also surprisingly easy to remove (with eye makeup remover, of course). i also never experienced any irritation when i wore it (and i only wear mascara when i'm wearing contacts/circle lenses). i had tried countless other mascaras, but none were able to stack up to my Original Fairy Drops. i even tried the FD Platinum mascara and the FD Volume Burst Waterproof mascara, but it just wasn't the same and the fibres bugged the hell out of me. it just makes me so sad to see it go.

The MA at Sephora recommended this mascara since I mentioned I was looking for a mascara that would give volume and hold a curl. Firt Impressions: Hate the cheap chintzy looking packaging and was skeptical about the brush. Application: The brush makes it hard to get an even application even when applying as the MA suggested with the curved part of the brush. Some of the mascara gets to the root and then some does not because of the bumpy brush. The fibers in this mascara are not apparent and I would not have known they were there if the MA had not told me. I really hated the application and it took 3 coats to make it appear that my eyelashes had any thickness. NOT a volume producing mascara. Mascara does not add volume or length and barely holds a curl after curling my eyelashes...terrible product for the price - Maybelline has beeter mascaras! Wear: It wears okay throughout the day with no smudging and minimal flaking. Removal: The only thing I did like about this mascara was the easy removal.