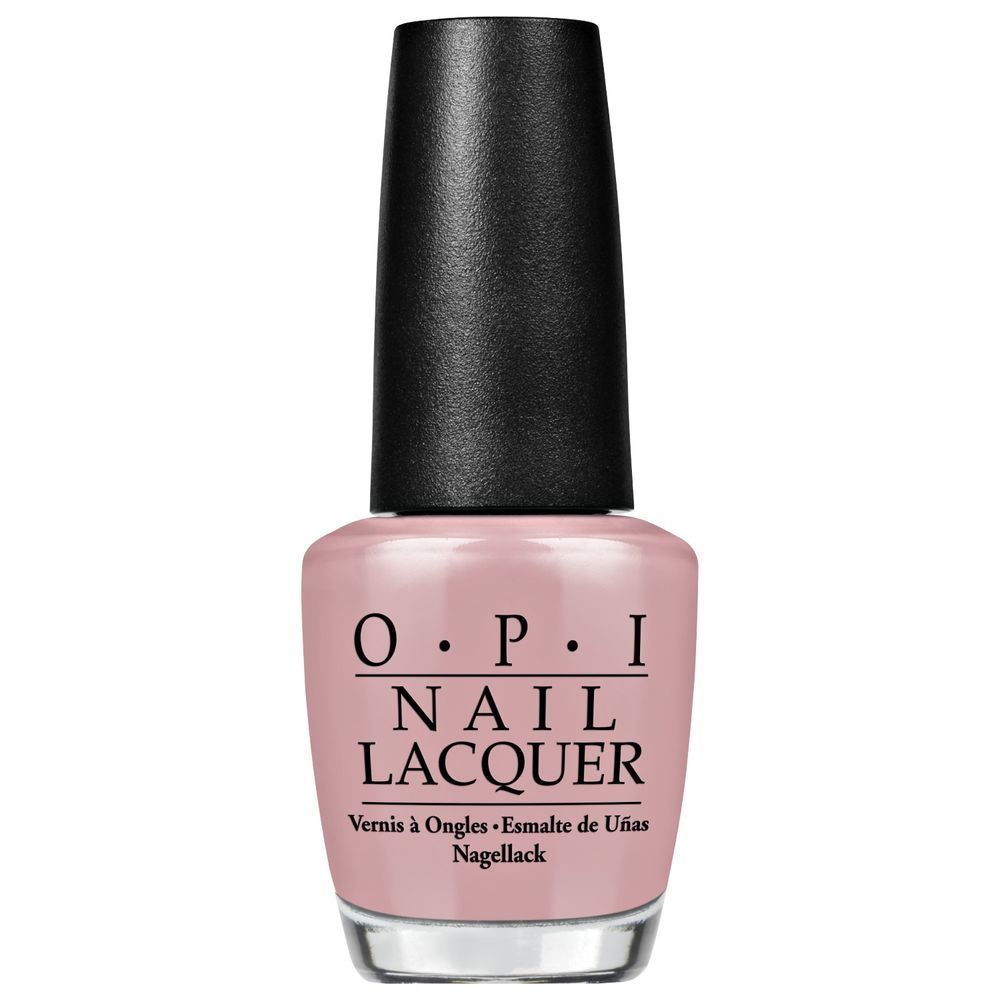 This is straight-up purple on me, not the pinky nude I was hoping for. Really not sure what's up; perhaps I have a weird bottle, or weird nails? Even thought I got it on sale, still not super happy with it. It's a nice colour, just not for me. The formula is great, though, smooth and self-leveling, although I believe the edges get a bit transparent. Sorry, OPI!

I've used several bottles of this over the years, very unusual for me since there are so many new shades I tend not to re-buy unless something is a HG. Tickle My Franc-y is the most wonderful nude shade. It's a taupe shade with a hint of pink. A glossy crème, it goes on smoothly and easily, it self levels, opacity is great with 2 coats. A top coat of Seche Vite and it looks fabulous for a week! Highly recommend!

It's a beautiful creamy mauve pink with a hint of grey. The colour looks different depending on the light, being more purplish in daylight and more greyish in dimmed light. Nice non-streaky application, fairly fast drying speed. Glossy and stays on pretty long.

This is an interesting shade. Looks like a nude brownish pink in the bottle. On the nails it looks like a light brown taupe. This is a different type of color then I would normally wear. When I first put it on I wasn't too sure but it really grew on me. It made me look like a sophisticated lady. I did notice it chipped quickly though. And it took three coats to look solid

This is nice -- one of Opi's better consistencies, and an understated shade that works...well enough, for me. But, overall, kind of underwhelming. It seemed to take ages to completely cure -- 24h later it was still easy to dent (I had yet to apply a top coat. For some reason, it took three coats, and not the two most have mentioned here, for opacity. I'm fair -- always the lightest or second lightest foundation shade -- and it doesn't look so much neutral/nude on me as it does a dark taupe. Other cool-toned pale sorts might feel like this is the polish equivalent of ye olde "suntan" pantyhose -- too dark and just not quite right... L'Oréal's "Doutzen's Nude" has a better formula, and is very, very similar -- switched next to each other on white plastic it was hard to see a difference (except the L'Oréal went down in one smooth streak and the OPI pooled off to one side -- I only use two coats of the L'Oréal, which is silly-easy to apply). On the nails, "Doutzen's Nude" is slightly lighter, and more mauve, less brown, than "Tickle My France-y." I tend to either wear stuff like rainbow-hued multicoloured nails OR "ladylike" conservative shades with little in between, so had high hopes for this as a new favourite for the "conservative" box o' polish. No dice; will keep buying the L'Oréal. On the plus side: apart from it being prone to dents and taking too long to fully dry, the stuff lasts. After four days, there's only a *tiny* chip on an index finger, so small that I really had to hunt for it. (Two coats Essie "Millionails" underneath, gel-type topcoat, unfortunately unbranded, widely sold in Canadian Dollaramas in a black bottle with three other mini bottles of polish -- give the polishes to a little girl if you don't like the colours or whatever, and just buy the set for the amazing top coat!)

I can honestly say this is the most beautiful nail color I have ever worn. It's a soft mauve nude that is perfect for any occasion, it's work appropriate but also soft and romantic enough to wear on a date night or special occasion. It's totally opaque with one coat, so It covers all discoloration or flaws, and its also a thin formula that flows easily, so it isn't streaky or patchy. This lasted 12 days before the tips started chippng slightly, but it's been a full 14 days now and most of the color is intact and my nails still look nice. Top this with Essie top coat, which does super quick and super hard, and you're good to go with a super flattering and long lasting color!

OMG! This used to be my favorite nude, a pretty putty color. I just ordered it online to refill my stash & thought it was just the lighting in photos but, Tickle My France-y is mauve-dusty pink now?? What happened?! I first bought this in 2008 when it came out and it was a real neutral/nude because it was 90% nutty mocha with only a tinge of dusty pink [see: Hilyal's picture]. This new formulation is the reverse. I weep. New color is a 2, oldie is a 5!

What a beautiful perfect nude this is! Very pigmented and easy to apply, I use opi start to finish base/top coat and it looks like a professional did it! This color is versatile and would be suited for all occasions and seasons, gorgeous pinky mauve with slightly brown to it.. It's one of my favorites! Highly recommended a must for any collection!

I own around twenty nude polishes and this is my favourite (halfway done the bottle.) What prompted me to write this review is that for the past two months, this is the only colour I wore on my fingers. It's the perfect nude for my NC30 skintone. Always polished, elegant and with just enough pink to not look corpse-like (very important!) One layer is opaque for a subtle effect but two layers is what I normally do, more pink shines through. I don't wear a base coat or top coat and can get almost two weeks of wear without chipping. The only reason I take it off is because my nail beds are visible and then I can happily paint the same colour again. Will definitely repurchase, HG status.

Hands down best nude color! I'm certainly not the best with applying nail polishes on myself but this ones a game changer! Love it!