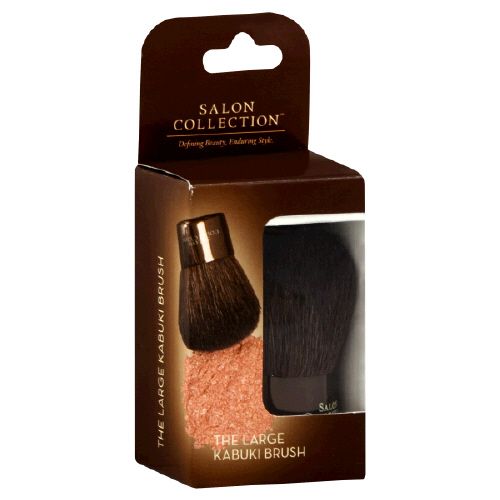 I purchased my Japonesque Kabuki brush in 2001 (over 18 years ago) and it is still just fine - minimal shedding and cleans up nicely with a mild brush cleanser. Now granted, I don't reach for that big-ass kabuki nearly as much as my cheek or powder brushes but when I need a gentle sweep of powder - Japonesque's Kabuki is my go-to. Every gal should have a Kabuki in her collection - just try before you buy to see if the bristle are soft enough - some are too &quot;scratchy&quot;.

I stopped in my local Walgreens and saw that their Salon Collection brushes on clearance. I picked up three including the Large Kabuki brush and was quite surprised! The brush was extremely soft with no sign of shedding. For the price, this brush is fantastic!

Like everyone else, I was a little skeptical buying this brush, but thank God I did! When I first saw it I wondered why it was called a 'large' Kabuki; it looked as big as a normal one to me. But once I washed it became super fluffy,covering a lot of area while retaining its amazing softness and the Kabuki shape. Unlike other cheap Kabukis (and Kabukis that should be cheap bc of their abysmal quality) it doesn't tangle at all when buffing or washing. The only problems I have with this brush are that it sheds a few hairs and I had to wash it like eight times to get the residual dye out. But other than that it is perfect. It blends really well - I have to buff a lot less than usual for my MMU application. It really feels effortless. And, as I said earlier, it really is amazingly soft - I rubbed it against my Mother's face (who has super sensitive skin) and she nearly purred! Definately for the girl who can't afford a higher end Kabuki (or doesn't want to shell out the bucks for one) but still wants a flawless application.... a.k.a. every girl, because, really, who wants to pay twenty-plus for a brush that stands about two inches tall?

I bought this Kabuki, while on a recent shopping trip to Wal-Greens. It costs $12.99, which is sorta pricey for a drugstore product. I have been using this brush interchangeably with my other makeup brushes with no problems. I have not noticed any bad shedding problems. Also, the hairs on this brush are probably one of the softest that have ever tpuched my face. This brush is softer than BE's kabuki brush. And, it is even softer than the old EM Kabuki brush that came out 3 years ago (as I still own that one).

As mentioned below, the Salon Collection is made by Japonesque for Walgreens. It's a nice looking kabuki with brown hair and metallic brown handle. I've heard good things about Japonesque so I was very disappointed in this brush. It shed like a mofo and might be the worst kabuki I have bought after a Crown kabuki. I have about 17 kabuki brushes. For the $12.99, I suggest the POSH kabuki for a good drugstore option at the same price. Second choice would be Essence of Beauty Kabuki at your local CVS

Hmmm..I love this Kabuki brush. Recently I bought a kabuki brush case from CVS for it (brand: essence of beauty) so that it has a nice place to sleep when I am not using it. LOL. It feels so soft, feels so wonderful on face--just the way I wanted. I use it for mineral powder foundation and it works beautifully. The hair doesn't fall off at all! I guess I am lucky? I am sorry for the reviewer below...Also at this price, it is a steal!!

The Salon Collection is made by Japonesque for Walgreens. I've success with other brushes from this line and needed a Kabuki brush for mineral foundation. I decided to try this one. It feels soft and looks like the higher end kabuki brushes that I've seen but that's about it. This brush sheds so badly that after four days I give up. I thought it might get better after a day or two but it hasn't. It leaves small hairs which leads me to believe the hairs are breaking. Until I buy a higher quality brush I'll stick with my short, fat, covergirl blush brush. That works much better and cost half of the $13 I paid for this.. I guess I'll have to invest in something of higher quality. *sigh*