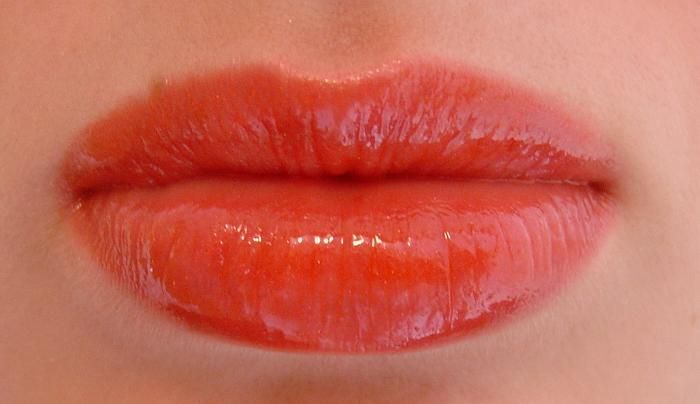 This is such a pretty gloss. I am not a gloss person, I just don't like the feeling of it on my lips BUT this is so pretty. I have never seen anything like it. Yes, it is sticky on lips but I just lightly dab on the center of my lips and wha-la: nice, naturally tinted lips. very pretty and subtle. I have not applied all over my lips like a traditional gloss so I cannot comment on this. This review strictly a blotted use review.

A very nice sheer pop of color. This is one of the few lipglosses I've found that thankfully does not have tons of that little sparkly glitter stuff in it.

Babe, what a glorious lipgloss! Such an appropriate name because when I put this on I feel like a babe, such is the sexy colour. Alright its thick, and yeah ok it's sticky, but man does this last. And it has great colour payoff, bright orangey red. I wait to I get into work before applying this as I'm in and out of car a few times and wind+hair and all that jazz and it's still there at lunchtime even through copious amounts of tea, water and answering upteen phonecalls. Few glosses have that staying power! Thank you Mr Nars!!!

Price is BOO as usual but I love this gloss. Ironically this was my first NARS gloss and 2 years ago I HATED it. So sticky, tacky etc. I was a Bonne Belle lip girl then LOL. The texture is still tacky but now it really doesnt bother me because the staying power is premium. It stretches my pennies so I love that in this economy. I am a lover or red and coral lipsticks because of my coloring (latina gile with soft golden caramelly undertones-NC44/45) and this is one of my faves. Its a lovely bright pop of color for the summer. I use this with NARS blush in Torrid and MAC e/s in bronze and woodwinked for a nice warm neutral eye with plenty of black mascara. This, Scandal and Misbehave should be staples for tanned girls.

I LOVE THIS. Some may be irritated by the texture and consistency; however, because it is so sticky, it lasts longer! The color is awesome on me... medium skin w/ yellow undertones. I can see this look great on anyone with somewhat tanned skin. My lips are really pigmented so colors always look quite different on me than others with similar skin tones. 'Babe' goes on darker than in the tube on me because of this, but not much darker... Try it on if you can and you'll see!! The price is worth it.

This colour is the perfect red, not too orangy but just enough. Looks especially nice on brunettes, it didn't really suit my blonde friends. The gloss is a bit sticky and you have to remove excess that builds up along the lip line. Packaging is ok, not the best as the product goops up a bit at the top and you have to remove it with a tissue. Overall the shade is perfect, I would definetly buy this gloss again!

Love the colour. HATE THE TEXTURE. It's like supaglue. So sticky and you feel your lips smacking together when you talk. Ugh! However, the colour is to die for. Fantastic orange-red that looks very orange in the tube but has quite a lot of red to it on the lips (and on my lips it's quite red-orange rather than orange). Swapped away because of the insane stickiness, yet loved the colour so much that I hunted down a dupe for the colour in Kevyn Aucoin Talula (coral red). Those of you that can handle the texture, it's a gorgeous color. Those of you who can't...try Kevyn Aucoin. EDIT: I recently received this as a gift (and didn't have the heart to say that it is awful and sticky so I tried to give it another go) - the main issue is it's sticky but this is the LONGEST lasting lip gloss in existence. I applied this to my lips 7 hours ago - (and have had a meal / drink) and it is still there. The color has settled a bit but it's still glossy! This can't be beaten for staying power...have lifted lippy status by one lippy.

I remember seeing this beautiful girl in a phone sex commerical one night on t.v and she was wearing the prettiest lipgloss, I've looked in a bunch of brands and all I saw were the typical corals yik.. but then I stumbled upon this one, and finally found a color that looks like what she had on... it looks really bright in the bottle but once applied it's a gorgeous mix of orange and red not too crazy looking unless you layer it on that way.

Babe, where have you been all my life? I've been too much a sucker for colors that look safe in their tubes; plums, nudes, etc. I'm glad I decided to do something crazy and put this orange colored lipgloss on (at least, that's how it appears through the tube). But on my lips, it became much more cherry popsicle red than I would have expected, with only a hint of orange in the sunlight. Indoors, it looks far more red than orange. My lips are fairly pigmented so this may have something to do with it; if I had seen the picture that was put up on here, I may not have tried it, thinking it's too orange. This lipgloss, though, is really the best of both worlds; you get to try a bit of an orange color that's very trendy right now, but doesn't look &quot;out there&quot; at all, and has a sexy redness that's just awesome. I also love its staying power, I'm a fan of sticky lipglosses if it means less reapplications are required, and that's what this is. EDIT: Just wanted to add: my boyfriend, who has never complimented my makeup and instead always insists I don't need it, etc. mentioned last night that this lipgloss looks amazing on me and he understands why I love it so much!

I can't believe I haven't reviewed this yet! This is my all-time favorite gloss. I've been wearing it for several years and have yet to tire of it. It's the most gorgeous warm red and it simply lights up my face. It looks really bright in the tube but it's so sheer it just leaves enough color to perk you up but your lips aren't screaming RED. As with most NARS glosses, it's sticky but it lasts and lasts.