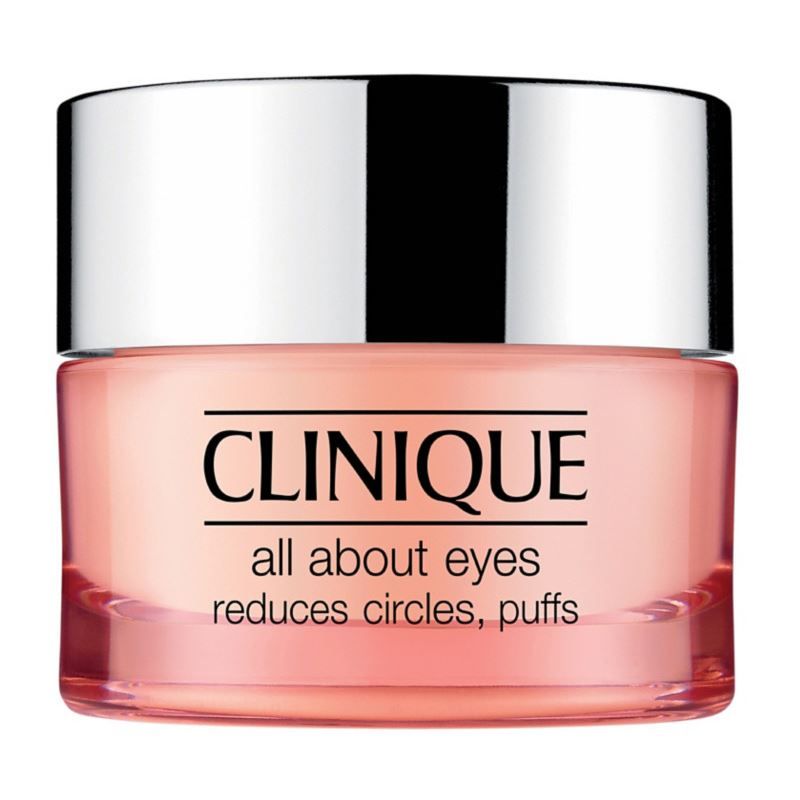 Nothing has ever worked for me and I’ve tried it all being 41. I have never repurchased any other eye product. This is gentle and hydrating, yet very effective. Freshness matters. Buy the small size. I learned this tip from another review: put on a few times while getting ready in the morning and before bed at night, letting the layers fully absorb (absorption takes a bit longer than you’d expect for a gel cream). When the cream is fresh, it ABSOLUTELY makes puffiness go down. It will last all through the night so you wake up fresh eyed, and all day, when you generously pack it on a few times each morning & evening. Bonus: you’ll use it up and replace faster so it will always be fresh product. I’ve never NOT had puffy lids and under eyes upon waking in 10 years til I did this. It feels cooling (rich doesn’t). Also using this OR the rich work on dark circles (though rich not effective on puffiness and too greasy for my combo oily skin). They “bleached” very noticeable flesh colored goggles onto my entire discolored red/blue orbital area. They also both made double rows of top lashes grow. The color correction and lash growth is from long-term use; puffiness is instant (remember: the cream MUST be fresh and non-rich for it to work on puffiness). Doesn’t cause milia. Makes no “anti aging” claims, only retinoids do that. This actually does what it advertises.

As others have said, this is just a basic moisturiser and seems overpriced given the lack of results. I honestly felt as though this made no difference to my under eye area.

I've been using this eye cream, along with the Moisture Surge Intense cream, for the last few months. I really like it. Mainly because it feels really creamy (almost oily feeling) and soothing going on. The first time I used it, I remember being shocked at the amount of slip it had, and thought "holy hell! This sure is greasy for an oil free cream!". But then a minute later it had completely absorbed into my skin, in a way no eye cream I've used ever has before. I was totally jazzed, thinking I could finally use an eye cream during the day under makeup, without it causing my mascara to smudge has been my main reason for never using eye creams during the day for all these years. However, after using this during the day for awhile, although it did cause my mascara to smudge slightly...the worst part was that I find the cream migrates into my eyes and leaves a film on my contacts, which leaves me walking around with blurry vision at work all day (and silly me I never bring saline solution to work heh) so that's obviously unacceptable. So now I only use this eye cream at night, and I switched to using Origins Ginzing for day time, and that stays put. But I still love this eye cream. Has it helped with dark circles and puffiness? No idea really, hard to judge. I'm an insomniac who always has dark circles, and I always use concealer under my eyes and no eye cream has ever wowed me in that aspect and I've come to accept it. I can say that I have no dryness or dehydration lines around the eyes, and I feel the under eye area looks brighter and fresher. I would like to try the RICH version of this for winter, but this jar has been lasting me forever (I have the 30 ml jar) and I still have half the jar left. To sum it up, I don't feel like this is a miracle cream, but it is nice and I like it. Recommend if you're not looking for a heavy duty anti aging eye cream, or heavy duty moisture, just something that feels nice and light

I bought this eye cream on a whim. I'm glad I did. I have sensitive skin and this did not irritate me. I like how it does not have a overpowering smell. It is very creamy and glides on under the eye. It feels cool when I apply it and honestly I look forward to applying it after my moisturizer at night. I could easily wear this under my makeup. I don't like how clinique is not cruelty free so because of that I will not repurchase.

I got the all about eyes cream and it worked wonders for me. My skin around my eyes looks rejuvenated and fresher than ever. I am in my late twenties and I think I have found a perfect cream for the eyes. Love love love it! Definitely going to buy another one

It's an ok eye cream, easy to apply and absorb without interfering with makeup. Consistency is rather basic though, there are many other eye creams that offer much more to the eye area. Still it's pleasant to use, if it were a gift I'd definitely finish the pot.

I have used their eye cream for the last 10 years! I’m now 37 & use it every morning. I love how it brightens & makes me look refreshed as if I slept all night despite my baby that always wakes me! It glides on really easily (remember to apply w your ring finger as this area is the most sensitive part of your face & you don’t want to tug at it) It dries quickly. I love the cooling sensation I feel after I put it on. Give this amazing eye cream a try. To really see how fabulous it is, use it for 2 weeks & then stop for a week -the difference will astound you! I use a wrinkle eye cream at night.

I like this product, I am just not very impressed by the relation price/quality. It hydrates well the eye area, it does not interfere with make up and it also doesn't irritate my eyes. However, in terms of puffiness and black circles I do not notice much difference when compared with cheaper products, like the pep-start eyes, also from Clinique. It also ends faster (maybe because of the package). One package only lasted 3 months (applying everyday morning and most nights). I had other eyes creams also of 15 ml that last approximately 5 months. .

I used a full size of this once or twice in the past (the gel version) and liked it for daytime use since it absorbed quickly, left a matte finish that didn't interfere with my makeup, and didn't irritate my eyes. After not using it for a while, I bought some again and am not happy with it. I find that it provides very little hydration. Even if I apply it quite generously, the area around my eyes feels and looks dry after a few hours. It also might be irritating my eyes.

It's very rare for me to really dislike a product, especially something as innocuous as an eye cream! However this one, despite being a GWP is now sat in my closet keeping all the other samples and GWP's company. I used it about 4 or 5 times. Each time I disliked the texture immediately, it just sat there leaving a shiny film - which would be understandable if that shine was due to SPF but no it isn't. This is more like an oil slick that neither moisturizes nor seems to have any other benefits. Perhaps the benefits are long term but I can't get past the texture to use it for a longer period of time. Not come across an eye cream I've given up using before. This is a first! Selena x ~ My HG list ~ (As I've sampled many 100s of skin, hair and m/u products over the last decade and a half, I thought it might be useful to share my top 10 must-have products, subject to change if and when I come across something more effective. I love constantly trying out new stuff - usually sample sizes via e-bay, also plenty courtesy of a friend who works at Sephora) 1. Hair Loss Treatment: ‘Divine Herbal’ - Hair Oil 2. Lip Balm: 'Nuxe' - Reve De Miel Lip Balm 3. Pigmentation + Anti-Ageing Treatment: ‘Divine Herbal’ - Facial Treatment Serum 4. Cleanser: 'Paula's Choice' - Skin Balancing Cleanser 5. Concealer: ‘Mac’ - Studio Finish Concealer 6. Lash Growth Serum: ‘Divine Herbal’ - Divinelash 7. Foundation/SPF: ‘Juice Beauty’ - Stem Cellular Repair (warm glow) 8. Face Scrub: ‘Sisley' - Botanical Gentle Buffing Cream 9. Moisturizer: ‘Antipodes' - Rejoice Light Day Cream 10. Hand Cream: 'Origins' - Make A Difference Rejuvenating Hand Treatment

All About Eyes925 reviews

All About Eyes Rich377 reviews