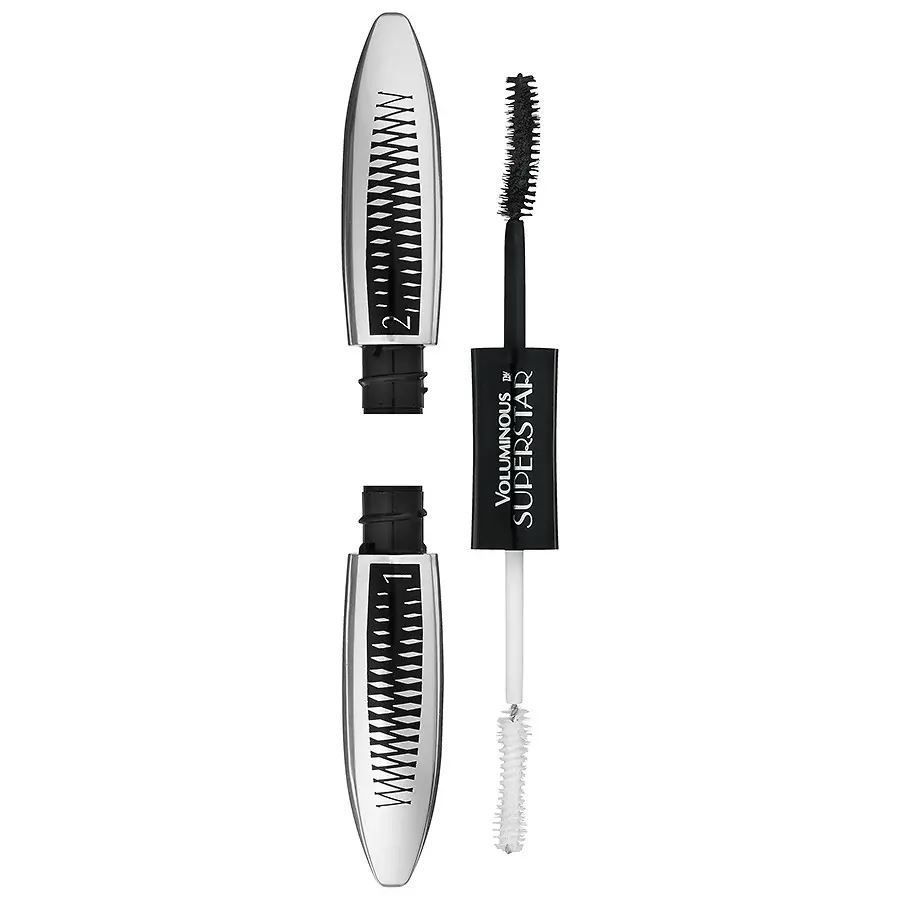 Love love love this, you must have patience to apply this two step mascara to reap the benefits of how awesome your lashes are gonna look once your done. Get the matching eyeliner as well trust me you'll ace that winged look with this paired together. The black version dries with a beautiful rich saturated matte finish and the curved wand makes all the difference highly recommend

Picked this up in Black and do not like it nearly as much as the waterproof version. This mascara gives a lot of length but that's it. It does not hold a curl and smears and smudges very easily. I like the primer/mascara application and the brushes for both sides are nice. Would not repurchase this.

PROS: - Primer &amp; Mascara - Dantey wand - brush is small enough to target the baby lashes CONS: - clumps - smudges - flakes off - doesn't hold curl - hard time coating every lash - spider legs - no volume - little length - eye irritation I was super excited to try this mascara but I was highly disappointed. It's a real mess and it irritates my eye since it flakes. I find my lashes have problems with some mascara. The lashes right at the top of my eye tends to have a hard time holding mascara. It's like it builds up at the root and keeps tapering off at the tips leaving the tips uncoated. This mascara tends to do that. My lashes look stringy and spider leg like. Very unnatural. I don't like to use an eyelash curler due to lash loss and wrinkles. This does not curl, it actually weighs down my natural curl. I'd recommend CG Plumpify over this mascara.

Ok, so I had great hopes for this mascara, I find primer to be an important first step in my mascara routine, and I have been a faithful Cils Booster XL user for many years, and have dabbled with Clinique's lash primer which I liked as well. So when the opportunity to save some money arises, I like to give it a try. However, not pleased at all with this duo. Like another reviewer said, it actually straightened my lashes, which made them look shorter and it just has a heavy feel to it. Sorry L'Oreal. Try again.

I'm surprised at the reviews! I have REALLY good results with this mascara!!!! Long, long lashes and it separates nicely!! I love this mascara. I also use Chanel Le Volume, Mac Upward and Difinicils. All with great results. The only one I had horrible clumpy results with was the Younique 3D(yuck). I do recommend this. Also, I add 2 drops of lavender essential oil in my mascaras. It has helped with my length and strength of lashes.

Why oh why can't L'Oréal (or Maybelline) release simply a reasonably priced LASH PRIMER????? That's all I want: a simple, affordable, GOOD quality, individual lash primer, which performs reasonably well! (sure, I like some higher end ones, but why would I pay more for a primer to go under my drugstore mascaras of choice?) But, nooooo! Not in Canada! (or elsewhere, too?) I am not a fan of dual ended mascaras, as they don't handle well (at least, not for me). I bought this new duo with the hopes of achieving the same intense black and thick volume as original/Carbon Black Voluminous. At the very least, if I didn't mind the primer, I'd only have paid $9.99 for the product(s). Primer: heavy, but it keeps my other mascaras wearing longer, with added fullness. Mascara: didn't mind the short handle and curved brush. However, I DO mind the flaking and black fibres which end up speckled atop my cheeks, under my brows, and sometimes under my NOSE!! Buy it for the primer, not the mascara. Buy it with a coupon, as well as on sale. But don't expect &quot;Superstar&quot; lashes.

Well, this one's a bust. I have never been a fan of doing the mascara two step, however, I am determined to find my perfect mascara, so I gave this a whirl. Not worth it. Doesn't do anything great and actually straightened my lashes by the end of the day. And worse, it kept leaving black marks where my lashes touched my skin under my brows. A major pet peeve! Argh!!

I liked it, I have really long thick eyelashes naturally so it didn't seem to add much length, but the volume is amazing! I would recommend putting the mascara on right after the primer, if I let it dry first it gives my eye lashes that hairy look. I thought it lasted really well throughout my day. I don't wear contacts so I can't say if it is irritating in that way. Overall, I would repurchase.

Wow could the ratings be much worse? 1.8 average. People really hate this but I bought it anyway out of curiosity because they had the new Red Carpet version. So I can't speak for the regular version, just this one. It supposedly has shimmery highlights that catch the light on the red carpet or with a flash camera. Needless to say, it does not. It does make my lashes almost too long, so long that they brush against the brow bone. But is that enough? I can only give this a fair rating but it's not horrible enough to give it the lowest rating. It does build long lashes. It's just so annoying and takes so long to use the white primer and then the black mascara. And it's no miracle formula. You need at least two coats and really three coats to begin to achieve anything like the look they advertise. You will not get that look without false lashes, by the way. It does not give volume - only length. And most disappointing, no pearly shimmer as promised on the package. It does work better than L'Oreal's other mascara with the white primer on one end. But only marginally better so only get this if it's on sale (which I did) and don't expect miracles. Of all my mascara experiments this is not the winner or even in my top five. It's just OK. Update Apr 22/16: Changed my mind. It only deserves a zero for all its failings. I dread using it and thus it is not even barely acceptable as a mascara.

Good for building lashes, but not good as far as transferring onto the upper eyelids. It wasn't even hot when I tried this and my upper lashes transferred mascara like crazy onto my eyelids. I was constantly having to wipe my eyelids. Not good. If you want great lashes that stay put without being waterproof, get L'oreal Double Extend. Has primer and mascara. Washes off with warm water. Will make a mess in the sink or tub with all the &quot;tubes&quot; that slide off your lashes, but it's the best!