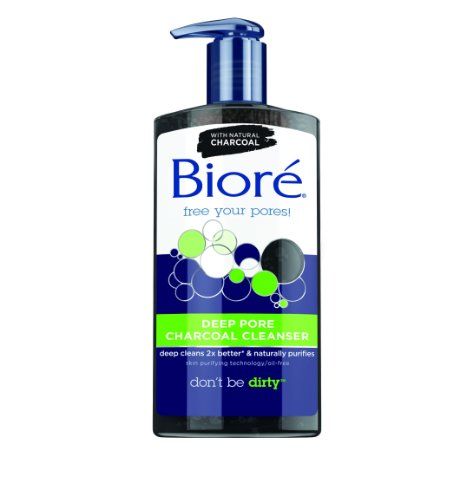 Let me start off by saying I have been following (sometimes loosely) the acne.org method for about 5 years or so now, with good results. However, I am pregnant at the moment and my skin is just not responding the same way. I decided to give this cleanser a shot on a whim because I read that charcoal products were safe to use during pregnancy and I have been very happy with it. I am more than halfway through the bottle and it has not irritated my skin at all, and it definitely leaves me feeling clean. It even removes makeup(I double cleanse for this) It does have a fairly strong scent, but I find it kind of pleasant.

For some reason I was drawn to this stuff and really wanted to try it. I have used it for 2 days now and I have to stop using it already. I like the packaging, easy to use and a big bottle for not that big a price and I didn't need a lot of product, so this bottle will last ages. When I put it on my face it tingles and makes my eyes tear, there is too much menthol in it, feels like putting toothpaste on my face. Washing it off isn't very easy, after rinsing thoroughly I still felt like there was product on my face, so I used my scrub afterwards. Face felt very clean! But when I came out of the shower and headed for the mirror to slap on some much needed moisturizer, my face was all red and irritated. It also itched and burned a bit. Thank god my eucerin 5% urea miracle worker could calm it down, after an hour or so most of the redness was gone. I don't dare using it again this evening or tomorrow, so I bought my old friend vichy normaderm again. This biore is just so harsh on my skin... I will try using it maybe once or twice a week and see what it does, will update about that later. But for everyday use this is a big nono. Background info: I always used to have sensitive skin that would respond quickly to almost everything with red patches and irritation. Since I started using the earlier mentioned eucerin I don't have any problems with that anymore, if anything my skin gets oily on the t-zone. Never had the red patches anymore, but I'm sure I will get them again from this Biore, even with my Eucerin. Update few days later: It took a few days for all of the redness to disappear. I am a stubborn person, so I decided to continue using this only on my t-zone, which is the only oily zone on my face. And now it also is the only zone on my face where I have many teeny tiny bumps! I never had this, I do get an occasional pimple every once in a while, but this is new to me and not good new. Also, the skin on my nose is flaking. ON MY NOSE! FLAKING! This area is usually oil galore, so I guess you can say it gets the oil out of my skin. A bit too well though. This stuff is just bad news, bad bad bad bad bad. Agressive like toilet cleaner, don't put this on your poor pretty face EVER! Will never repurchase nor recommend. Normally I give away stuff that doesn't work for me or I don't use anymore, but this went straight to trash.

I love this product!!!! Im on my second bottle right now and i use the one for oily skin. I use it while im showering, and after i wash my face ill put this on and let it sit for just a few seconds and rinse it off. I use it every other day cuz my skins a bit sensitive. Also the first couple times i used it, i left it on for too long which made my skin burn a bit so if ur sensitive only leave it on for a few secs. After being disapointed by so many other skin products in the past, im really happy i found this! My skins been way more clear because my face isnt as oily! After i use this in the shower &amp; dry off, ill moisturize my body and then use a water based moisturizer on my face (l'oreal hydra genius for oily skin in the glass bottle is awesome) and the combo gives me amazing skin and i usually have redness in my skin. But using these products makes the redness go away!!!!

Because charcoal is supposed to bring gunk out of your pores, I tried not to let the pimples faze me and used this product for a month. This cleanser broke me out in places that I’ve never even had breakouts before. Like the other reviews say, it seemed to make my skin much more oiler than usual. It also has a lot of menthol that would burn my eyes after I used it. All the other Biore products have worked wonders for my skin except this one. 2 thumbs down.

I have used this cleanser for years and LOVE IT. Usually, any new cleanser will break me out within days but this biore one is one of the few that doesnt irritate my sensitive, acne prone skin and I find that it really does remove all my makeup. I love that the product is drugstore and relatively cheap for the amount you get,I typically use it once or twice daily and a bottle lasts me months.

Hormonal imbalance has become a major problem in young women worldwide. And I being a victim of the same suffer from a lot of acne around my chin and cheeks which are most of the time cystic. With these acne, whiteheads and blackheads also came to me as uninvited guests. So to treat them, I used a lot of things like baking powder scrubs, pore clearing strips etc. etc., but nothing really stopped them from coming back. So to prevent them from the very beginning, I turned to Biore Deep Pore Charcoal Cleanser as my daily face wash (as I was already very happy using Biore Pore Strips, my trust in the brand grew). The face wash comes in pump dispenser bottle which makes it easy to use. It has a cooling sensation which might not be very pleasant for many and leaves your skin really dry afterwards. I have used it for over a month to really see what it can do to my skin. But as per my experience, it was a total disaster. They mention on the product that it is for all skin types but friends, do not go for it if you have dry skin. It literally worsened the whole condition. My skin started producing oil at places I have never experienced before. There were noticeable whiteheads lingering out of my pores. Giving food to bacteria, such whiteheads led to crazy breakouts around my chin and cheeks (Even forehead!!). Now, it is just lying obsolete in my bathroom cabinet. Pros: 1. Good Packaging Cons: 1. Dries out your skin, 2. Oil production increases to combat dryness, 3. Worsens whiteheads, 4. Not for dry skin, 5. Bit on the expensive side, 6. Not really travel friendly.

Horrible, i thought by buying this it would help with oil control but it made it worse! I used this product for 2 days and noticed that my oil was worse than what it was when i was using the Garnier Pure Active with Blueberry, which really controlled my skin. Now im breaking out all over the place and i have a concert to go to tomorrow... with oily ass skin and breakouts!! My makeup is not going to last! So pissed! Steer clear! Otherwise your face wont be!

I did not like this product. My skin did not react well to it and didn't really feel it was getting properly cleaned. After few days I also realised I got an increase in my blackheads and some breakouts as well, even continuing with all the other steps of my facial cleaning/treatment. I would not recommend for someone who needs a proper deep cleaning.

DO NOT BUY THIS PRODUCT!! It is TERRIBLE. My skin never breaks out, I get a few pimples her and there and I wanted to stop that by using this product. I used it the first day and it made my skin red, itchy, and hot. I thought it was just a side effect so I tried it again the second day. I put most of it on my forehead where it gave me a ton a big red bumps that are so embarrassing I can't even go out. They hurt so bad and they have stayed on my forehead for the past 3 days. Im REALLY worried they won't disappear. DONT USE IT

I love this stuff!! I’ve been struggling with moderate acne for a bit, and after two days of using this I had no more active breakouts. It has been a couple of weeks and I’ve even gotten my period and I had only a couple of pimples. This is amazing and feels so good when you put it on your face. Highly recommend, I also love the pump! It lathers easily and tingles and it feels so nice!