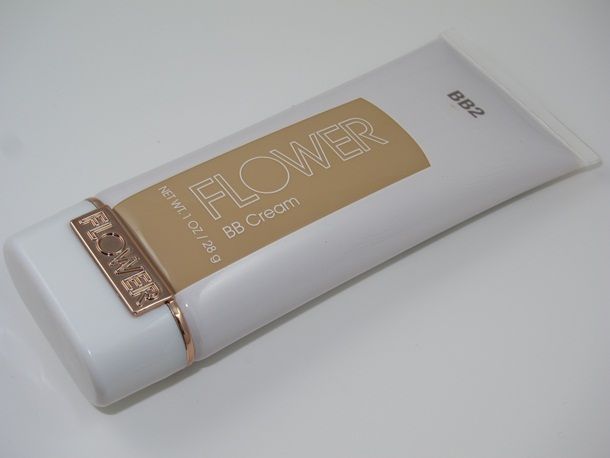 Product is pretty good, I already ran out the p I already run out , Anybody can tell me Which store I can go get it ?thanks ????????

This emphasizes fine lines,pores, and dries unnaturally. This is difficult to work with. Sponge, fingers, brush, using primer, using moisturizer...I can't get this to look good. I'm returning this to Walmart. All the negative reviews here were the reality for me :/

I really, really wanted to love this. Sadly I don't. Here's why: I absolutely love Flower brand and since I'm obsessed with their About Face foundation I thought I'd give this product a try. Unfortunately it's is more like a foundation than a BB, and not a good one at that. It looks awful and streaky if you apply it with anything other than a beauty blender, it's super thick and heavy-feeling, and makes pores and fine lines look magnified, which IMO is the exact opposite of what a BB cream should do. I do like that it has yellow undertones, which in my experience is so hard to find in a drugstore brand. It's price is good too. But honestly those are the only pros to this product. I'm able to kind of make this work more like a BB by thinning it out with some primer and a few drops of smashbox primer oil. But that's so much effort for a product that's supposed to be quick and easy. So disappointed. I still love the brand, just not the product :(

I have olive-toned skin, and I bought this as a recommendation for yellow-toned BB creams. The coverage is amazing--just brushing it over my pores, sunspots and whatnot covers very nicely. It is kind of expensive for a drugstore product, but the quality is much, much higher than I expected. Be warned, I keep checking Walmart's site to see if it's still in stock, since going to an actual Walmart is a major trek, and it shows it out of stock everywhere. This led me to believe that it was being pulled from the stores, especially since I went into one Walmart (albeit a smaller one), and it wasn't there. However, I stopped at a different Walmart the other day and the whole line was in the store, despite the fact the website says it's not in stock. I bought two tubes, just in case. The only thing that could make this better is if the packaging were such that I could easily add pigment to the bottle (I add green to counteract much of the pink that is typical in foundation-type products). Even with the amount of yellow that is in this, I still wouldn't mind adding some green pigment, and without emptying the tube, this isn't really practical.

great product - goes on easily and last all day - only issue is this product is definitely heavier coverage than i want in a bb cream - if you are looking for an all in one full coverage or medium to full coverage product, this is one you should absolutely try

I've put off reviewing this for a few months because I am so conflicted about this stuff. On the one hand, it's yellow toned, not pink or orange like a lot of drugstore products. It also has fantastic coverage for something that feels as light as this does after it's applied. I would definitely call it full coverage. It usually totally covers my acne and scars, without concealer. But I hate the way it looks after it dries. I end up looking like I have scales on my face because of how this sort of breaks up on my face. I could forgive that if it happened after hours, but it's like that after a few minutes no matter what I do. It dries pretty fast, so I've even tried working in small sections at a time. I've tried applying this with primer, without primer, on a bare face, with just moisturizer under it. I've used it alone, with setting powder, setting spray. I've used my fingers, a beauty blender style sponge, a cheap makeup sponge, a foundation brush, and a BB cream brush, all with pretty much the same results: scaly looking face. I've even tried just applying a tiny bit of it to problem areas instead of my whole face, and mixing it with foundation, sunscreen, moisturizer, and thinner BB creams with no luck. If I had a product that applied beautifully and mixed in just a little of this for extra coverage, it would look scaly. I just can't get it to look good most of the time. I think maybe twice it's looked alright, but I didn't do anything different and it started looking bad after a couple of hours instead of minutes. And, I'm almost 100% certain this breaks me out. There's always a chance it's coincidence, but I don't think so. Pros: -Full coverage -Light feel after it dries -Yellow based instead of pink/orange Cons: -Makes my face look like I have scales -Very limited shade selection (I've only seen 4) -Pricey for drugstore -No sunscreen -Makes me itchy and caused me to break out I wish I loved it, because the coverage is fantastic. But, it's terrible on me.

This really shocked me at how full the coverage was and how the formula felt luxurious for a non-department store brand. I follow a beauty blog of this amazing makeup artist who in my opinion, is a wizard at transformation. In one entry she posted, she was wearing Flower BB Cream and described it as shockingly full coverage and not the typical pink/orange. For $12 at Wal-Mart I thought doing one test couldn't hurt the wallet. OMG! I tried it on and it covered EVERYTHING and I didn't even need concealer. I'm very picky about coverage since I have dark spots that never went away from acne. I always have to airbrush my makeup just to hide them. The best part about it is that the shade matched my skin perfectly. *BEWARE* this has a very neutral yellow tone to it so it may not work on cool or warm skin tones. It may show up too yellow on cool and it may show up ashy on warm. I'm neutral so it worked perfectly. I think it may be a better match to olive skin tones. I was curious about the brand and why it felt like a high-end department store makeup but for so cheap so I researched online and I found out that it is Drew Barrymore's cosmetic line. Flower doesn't pay for any big advertising so Drew strictly endorses the brand on her own. Since most expensive cosmetics slap a hefty price tag on because of their advertising costs, Flower is able to use all that saved money and focus it more on using the same quality ingredients as expensive cosmetics. I was very happy to hear that. I only have one issue with it and it's really not that big of a deal. It is very thick and full so during the day when my skin gets super oily, it will get very creamy so it can appear cakey. I fix this issue by blotting and when applying, I use a stippling brush to blend out and pick up more product. When I say thick, don't mistake it for a typical heavy, greasy type of foundation. It's actually very silky smooth but covers thick. It doesn't feel heavy like foundation. It feels more like primer and creamy foundation were mixed together. It actually reminds me of Laura Mercier Silk Creme Foundation and I would say it's a close dupe. I ease off a bit on the concealer under the eyes and apply the tiniest dot for blending because the coverage alone is enough and piling on concealer may make it look too heavy on the eyes.

Who said a bb cream couldn't be full coverage? I get all day wear and a satin finish with this. I use shade BB3. If you have a med/dark skintone and find most drug store products are too orange, try this shade as it is more of an olive/green toned base. It gives an airbrush like finish. This doesn't break me out as other foundations/bb creams do.

I think this a great product (tbh i don't consider this to be a bb cream due to the awesome full coverage). plus it lacks any spf and it provides a matte finish (these are not cons however in my book). sometimes when i want a lighter coverage i mix it in with a little moisturizer and it still provides good coverage. i love the full coverage, the staying power is pretty decent in comparison to my other matte foundations. the only thing i don't like is it does stick to my dry patches like crazy (i'm currently on retin a)--more so than some of my other foundations. and i love this for its strong yellow undertones, i'm an nc20-25 in mac and my shade is bb2.

I have warm, olive skin, so I struggle to find yellow-toned foundations that are yellow enough to work for me. I bought this because it looked yellow enough and I was looking for a nice, everyday bb cream to wear to school that I wouldn't have to think about. After two months of wear, it seems the search is still on. *Price: I think it was like $13CAD. Not too bad for the drugstore. *Packaging: I like the tube concept, because you can control how much product you get, and it has a clear panel where you can see how much product you have left. *Product: Very thick, very pigmented, very yellow. Extremely so. I sometimes mix a few drops of this with my Mac Face and Body if I want to increase the yellowness and the coverage. The consistency reminds me of a mix between the Rimmel Stay Matte foundation and the Kat Von D Lock-It Tattoo foundation. *Positives: Great coverage, caters to yellow skin tones (rare in non-Asian bb creams), and extremely matte, drying to a powder finish. So if thats what you're after, here it is. It lasts a long time on the skin, I find it hasn't faded much after 6-8 hours out. *Negatives: On personal preference alone, it smells like death. It also oxidizes a lot darker on me. The colour selection is terrible as well, the next shade up being much, much darker than should make sense. It's heavy, I can definitely feel it on the face. Also there's no SPF or any of the other benefits that a bb cream traditionally yields. Overall, if you're looking for a matte, full coverage, yellow FOUNDATION from the drugstore, this is it. This can't possibly be considered a bb cream. I can see this being great for people who are interested in the way it wears and performs. Personally I want a bb cream that's lighter and sheerer, with a natural/dewy finish for daily wear. Guess I'm still on the hunt!