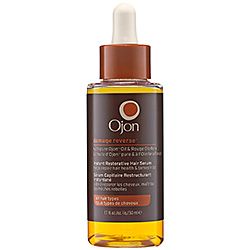 I bought this 9 months ago after trying to do my research on a more natural hair oil than Moroccanoil (which smells great and appears to work but which is mostly silicone). I also get a lot of split ends. At first I also found it to seem greasy if I didn't use the tiniest amount. But over time I seemed able to use more and more (partly because my hair also grew longer and longer, but the effect didn't seem entirely dependent on that). After using it 9 months, I am not confident it changed anything about my split ends. Recently I was trying to find the ingredients (even though I thought I had figured it out in the beginning), and I realized you have to peel the label back to find it (but it's well made so it isn't obvious). Turns out, some of the primary ingredients are silicones and the bulk of the oils used are (in order) sweet almond oil (ingredient #2), olive oil, avocado oil, palm kernel oil, macadamia, jojoba, sunflower, and castor seed oils (and a few others in diminishing importance). So what is &quot;ojon oil&quot;? I have no idea, but I think it is a mix of many common and inexpensive oils with a hefty price tag and few silicones mixed in. I have even used this oil mixed in with my lotion on my skin and I have noticed zero effect. That is, no difference than in my lotion alone minus a temporary extra &quot;sheen&quot; to my skin that doesn't actually appear to cause long term moisturization. While I will admit that one bottle lasts forever and ever, I stopped using it and will probably throw the remaining half away. My goal was to find a hair oil that doesn't use silicones as the application vehicle, but this product fails on that count. If your hair is being coated with silicone, then all the &quot;benefits&quot; you think you're seeing are an illusion.

this is either a hit or miss product. I have fine hair, some split ends, and color treated hair. I am someone who rarely uses hair products, i.e. sprays, mousse, gel, so I don't have too much problems with my hair other than being on the dry side. been using it for a few days and I do like the product as it helps to smooth it out as I have flyaways. you have to be very careful to use only one to 2 drops for your whole head of hair. IMO 3 is max if you have thicker more full bodied hair as it is pretty heavy, it will weigh ur hair down and also make the ends look dirty like you haven't washed your hair in days. the thing that made me like this product is that one time I forgot to put conditioner in my hair BC I was in a hurry, and my hair came out super dry and frizzy. and I used a drop of this and my hair was instantly smooth out again otherwise I think there are more effective hair repair serums put there with less weigh down

Bought the whole ojon line at one point because I was so impressed with their claims. I didn't buy the 3 oil one they have because that one is apparently for thick, course hair. Not sure how heavy that one is, but this one did zero for my hair. Might as well put olive oil on your head. Also, it broke me out big time on my neck.

Love it just like the rejuvination oils-but this is slightly more silicone ish. Works extremely well as a heat protectant and against humidity and frizz

Only hair serum that actually works for my hair. My hair is really, really fine and thought it would be heavy. It's not. My hair looks like cotton candy. I should post pics really. This serum makes my hair look like hair instead of fuzz. I have tried a number of serums, I've tried argon oil which leaves my hair oily. Ojon looks like an oil going on but soon absorbs and looks absolutely incredible. I never knew my hair could look so good! It makes my hair look like hair that I always wanted. My mom said I look like I have real hair now. For the record, I inherited my hair from my mom and she uses it now as well. She's shocked at how well it works. It's perfect. Will absolutely repurchase. A little goes a long way so the value isn't bad at all!

I agree with other reviews stating that this is the WORST hair serum ever. I had always been curious about the Ojon products, I've read good reviews and I wanted to give them a try so I bought the Volume Advance Kit that includes half an ounce of this serum (I wasted $40). I am glad I didn't buy the full size, this serum makes my hair look oily, like it hasn't been washed and it does not control frizz at all, as for restoring my hair I don't see much improvement either. I tried different amounts in so many different ways, a tiny bit on damp hair, towel dried hair, dry hair etc, it doesn't matter how much product I use the result is the same. I've always had thick frizzy hair so I've tried many products but keep coming back to John Frida which is 1/5 of the price of this stupid product. I have to admit I like the packaging though, the bottle with the drop dispenser is kind of cool.

This is one of the WORST hair serums I have ever used in my life. Ive always been a bit skeptical of Ojon and have always found their products to have an unnecessarily overpowering smell. However, I saw a travel size of this in Boots and was curious so I thought I'd try it. My hair is fine but abundant, oily at the roots with a tendency towards dryness at the ends. Ive used many oil based hair serums before and have never had a problem with my hair being weighed down or looking greasy- e.g.. Kerastase elixir ultime is one of my favourites. I put a tiny bit of this serum on the ends of my hair after towel drying and then let my hair air dry. Once dry, my ends looked lank, ratty and as if I had smeared chip fat on them. I was honestly horrified. I have never known a serum to make my hair as disgustingly greasy as this one did. I can only imagine what would have happened if I had used it on my entire head. Angrily, I had to retreat to the shower and wash this crap out of my hair. Awful product.

I got a mini bottle with my Sephora points a few months ago, and I am still not finished with it. It looks like I barely touched it. A little goes a long way!! I love how soft it makes my hair! I put a little before I blow dry and if I need it after I straighten my hair. Once I'm finished with the little bottle I'm most likely going to by a new one! Love it!!

This is a miracle cure for dry, damaged hair. In fact, the whole line is amazing. With one use of this on damp hair it looked like I had never ever coloured or damaged my hair. You literally need 2 drops of this and it is enough so considering that i guess it is not overpriced. But in reality it is overpriced. I will definitely repurchase though. Love it!

I love this product. It leaves my hair super soft and untangled. I use a few drops after showering and let it air dry. One of the few products that worked for me. Only bad thing is that sometimes I feel it makes my hair a bit only maybe I shoukd use less drops.