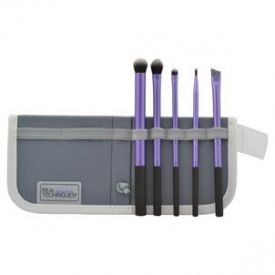 If I lost this set, I'd buy a new one ASAP! Mine isn't the same as in the picture, instead of an angled brush it has a brow/lash comb with evenly spaced fine teeth and a brush cup instead of a travel case. The eyeshadow base brush, accent brush, crease brush and thin liner brush are all the same though. I'm not really a make-up brush kind of girl, I only ever do my own make-up so I just use my fingers for foundation, cream eyeshadow or blush, smudging eyeliner and using cream or stick highlight and most of the time I'm satisfied with how it turns out. Eyeshadow and eyeliner however - that's a different story. Brushes included: -large base shadow brush - fluffy with longer central tuft, bristles less dense. Applies over eyelid easily and evenly without being too full-on looking like I just used my thumb. -accent brush - smaller, denser, flatter brush, bristles cut in convex shape. Can pack on shadow for very bold solid colour, or to apply shades to smaller areas on the base shadow. -crease brush - soft, less dense brush, looking up it has a circular shape, great for blending especially in crease, as the centre fibres are longer than the outside. -liner brush - thin dense brush, great for gel eyeliner or setting an eyeliner with an eyeshadow the same colour over the top -lash comb - metal bristles that will separate anything, even waterproof mascara coated lashes that are like 8 lashes all stuck together. There's minimal shedding, and are easy to clean. Bought mine ages ago and they've outlasted most of my other brushes, despite heavier use of the RT brushes. They're soft, not dramatically so, but enough to apply and blend make-up without scratching or discomfort. It's so much easier to do various eye make-up styles with these brushes, definitely one of my best decisions concerning buying make-up.

I really like these brushes as they are super soft and make my eyeshadow go on amazingly.

I like RT brushes because they are so affordable and good quality. But when it comes to eyes, they are a flop. I can get more product with my Lamora brushes and they are also very affordable. I feel that these RT brushes are too dense. They are perfect for blending and a simple, natural look.

I have some Sigma, Paula's Choice, Lancome, IT brushes and Bobbi Brown and felt like I needed some targeted eyeshadow brushes. My last buy for eyeshadow brushes were from PC and these are so much softer and plush. I am going to throw the PC brushes away. The Sigma brushes seem too large, and the Lancome are just one size, floppy and not that useable. These suit my need and are quality for the price. I already bought more Real Technique brushes based on the quality of these.

My actual rating is 3.5, but I am bumping it up to four because these brushes are incredibly affordable for a set of five and they are also cruelty free. Here are my thoughts on the individual brushes: -Deluxe Crease Brush: this one is round and domed and not nearly as long as a lot of crease/blending brushes that you see on the market. It is soft yet also dense, so it is effective at blending out shadow. Since I have hooded eyes I can't really apply and blend the crease color with this one, but if I use a different brush to put it on and then blend with this one it works nicely. 4/5 -Base Shadow Brush: I don't love this one for dry shadows, but it is nice with creams or with wet shadows. The pointed, tapered end lets you get all the way into the inner corner of the eye effectively. Because it is relatively flat, it is good for patting on wet or cream shades, but I find that it doesn't really hold onto dry powders very well (possibly due to the softness of the bristles.) 3.5/5 -Accent Brush: This is by far the best brush in the kit, and honestly I'd pay $17 for it by itself. It is small and precise, and it is great for shadow on the lower lash line. I also like to use this one to pat dry powder shadow on top of pencil liner to set or emphasize it. 5/5 -Fine Liner Brush: I find it to be too thick and chunky to be &quot;fine.&quot; It works well enough to line the eyes, but it isn't nearly as precise as I would want it to be. The bristles are in a more cylindrical formation and not tapered/pointed on the ends like most liner brushes are. For me, it really does not work well with cream or gel liners, but for some reason I do like it with shadow that has been dampened for use as a liner. 3/5 -Brow Brush: again, too thick. The other brushes in this kit are so thoughtfully designed, as are RT brushes in general, but this one just stumps me because it is so gigantic. It is impossible to get any kind of hair-like strokes out of it because it is so thick. Unless you want gigantc eyebrows, this one is probably not going to be your go-to. -the case: I think I threw this away years ago. It is neat in concept, but I found it to be really impractical for me.

Recently repurchased this as my old set has seen better days, I love real techniques they are affordable and imo good quality, not loving the white case this updated kit comes with but that's not as issue as I don't use the stand/case anyway

It's an okay starter set

i kind of feel like this set was a waste of money for me tbh lol. the brushes are great quality but i can't use all of them in my routine, so that's my bad. brow brush - waaaaay too big for me, i have super sparse brows and need a lot more precision than this allows for. i threw it away after a year of non-use liner brush - seems pretty good but i prefer a small angled brush to apply liner with. i've tried this a few times and, again, felt that it wasn't as precise as what i'm used to. threw it out small &quot;smudge&quot; brush - okay who the heck is using this to smudge anything lmao. it's so stiff i feel like it would be super painful to use for that purpose. i actually like this brush a lot, and use it for cleanup exclusively - i tidy up my brows with it, fix eyeliner wings with it, sometimes i even use it to clean up my lip lines. i almost want another one to apply inner corner highlight with; i think it would serve that purpose well. this is one i've been using consistently and would repurchase as a single. large eyeshadow brush - again, just okay. i like these kinds of brushes to use in the crease to diffuse product or further blend out shadows, and i could see it working well to apply something matte really sheerly all over the lid. i actually probably liked this brush best of all but accidentally held it over a candle for a split second one day and melted some of the bristles accidentally lmao. it got too scratchy to use comfortably on my eyes. but this is another one i'd like to get back into my brush circulation. blending brush - i prefer the crease/blending brush from wnw's white-handled line with the pink bristles; this RT one is quite large and dense. nowadays i keep it in the makeup bag i leave the house with and use it to touch up my base with concealer. it serves that purpose well. i never use it on my eyes anymore. overall i shoulda known better. it's a good kit if you're just starting out and don't really know where to begin with brushes, i think something like this will show u what your own personal style is and what your needs are. but if you already have a variety of brushes and you dont feel like you're missing anything in particular, skip this and buy other brushes individually instead.

I bought this little set at Kohl's and have utilized them all for different purposes. I find them a great deal for the price. I do not find them scratchy either. I suppose that is a relative thing. They really are decent and well made brushes. 1. Especially I like the larger Shadow brush for laying down base shadow all over. I use this daily. 2. The larger Crease brush I use to blend out eyeshadow above the crease and sometimes as a buffing brush for my concealer. 3. The Liner brush I use when I don't necessarily need a fine line for my lid or under eye. 4. The Accent brush is great for getting in small places like the inside corners of the eyes and at times on the lid. 5. The angled brush is useful for making finer lines and I also use it for my brows when my other angled brow brush is drying. I would say I would recommend these for those who are starting a brush collection or for those on a budget. They have been very durable. I have not had any shedding from them yet and I have had my set for over three years. I use at least one of them daily.

Just wanted a good basic set because I'm not an eye makeup person but this turned out to be incredibly horrible. The bristles are tough and pokey in my eyes. The brow brush is way too bushy to apply brow gel well and the eye liner brush is really laughable for a fine line. Overall quite disappointed with the experience. And man! They're expensive in Singapore.